The 11 Best Ramen Spots in NYC

There's never been a better time to eat a bowl of ramen in New York City than right now. We had a surge in the mid-aughts of terrific new noodle shops and since then the hits have just kept on coming. For this assignment I ate in at least 20 different ramen restaurants over the past month, returning for the fifth, sixth, or whateverth time to all of the usual suspects, in addition to slurping down bowls in a bunch of more recent contenders. Some older standbys were disappointing, but there were plenty of exciting newer joints eager to jump in and pick up the slack.

Here, then, and in no particular order, is the definitive list, the absolute best ramen-yas in the city today. I don't want to hear any guff about it in the comments. 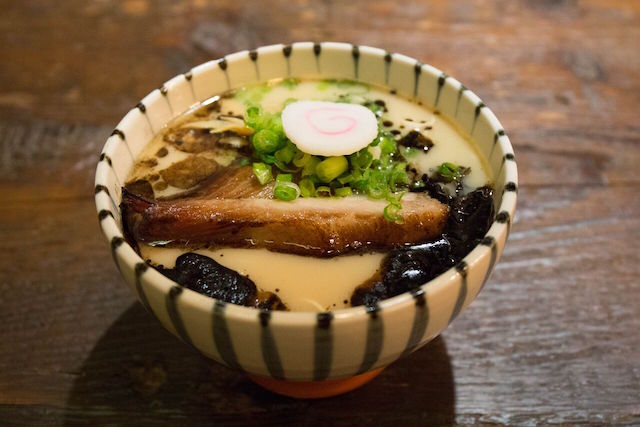 MU RAMEN: Pete Wells blew up the first Mu Ramen spot when it was running after-hours in a LIC bagel shop a couple years ago, forcing chef Joshua Smookler to open a legitimate restaurant on Jackson Avenue to feed his sudden legions of fans. That was toward the end of 2014, and a recent revisit confirms both that those fans are still there—there was a line down the block to get in on the first seating of the night—and that Smookler's ramen is as dense and delicious as ever. Everything's great here (including the funky communal table and even funkier playlist), but I usually wind up getting the Tonkotsu 2.0 ($15), punctuated with slabs of pork jowl. 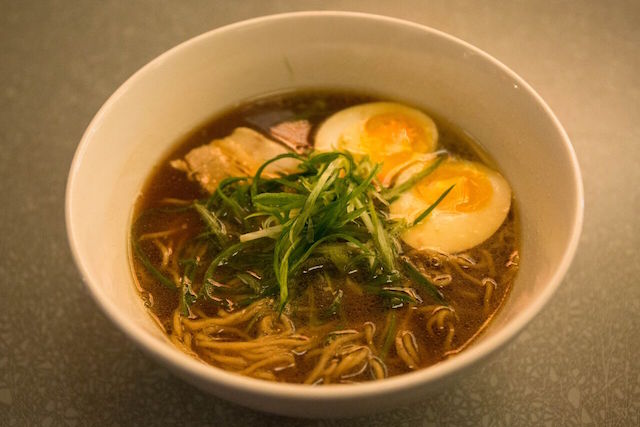 IVAN RAMEN: Ivan Orkin's ramen is by far the best made by a Jewish kid from Long Island. It's been over two years since he set up his Slurp Shop in Gotham Market, but these earthy and substantive rye noodles continue to amaze loyal eaters. If you can, though, dine at the Ivan Ramen Clinton Street flagship, where the scene is lively but not scream-y, and the appetizers all are worth getting (my family will always order the tongue). Note: the Triple Pork Triple Garlic Mazeman is as good or better than any of the ramen dishes, though I do miss the Three Cheese version. RIP.

Ivan Ramen Slurp Shop is located within the Gotham West Market, 600 11th Avenue, at 45th Street in Chelsea; the Ivan Ramen restaurant is at 25 Clinton Street between Houston and Stanton on the Lower East Side. (ivanramen.com) 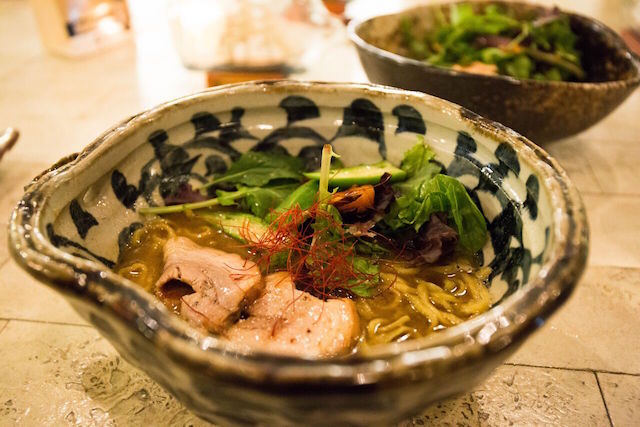 BASSANOVA RAMEN: Tokyo import Bassanova has lured ramen fans into its basement Mott Street spot since the summer of 2013, and for good reason. Not only does this place always feel like a good time, but chef Shoushin Yanaura and his crew consistently make crazy rich, complex bowls of noodles. The Green Curry Ramen ($15) is the signature dish. It's fiery and different and, with that dense sardine and pork-based broth, deeply satisfying. You should eat it. But the mazeman is excellent here too, so you should also eat a bowl of whichever one strikes your fancy that night. And then, I guess, you can roll home.

Bassanova Ramen is located at 76 Mott Street between Canal and Bayard in Chinatown. (212-334-2100; bassanova-ramen.com) 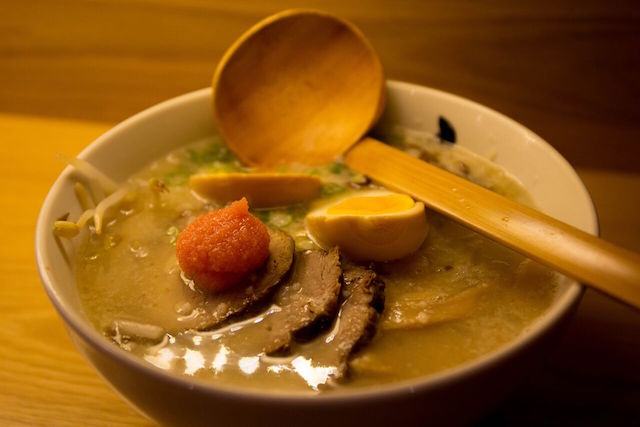 HIDE-CHAN RAMEN: I'm pretty sure I've never been to this hallway-shaped second-story ramen-ya, either for lunch or dinner, without having to stand awkwardly on the staircase for some time while waiting for a seat. It's fine though, since the line usually moves quickly, and this Japanese import is totally worth both the wait and the trip to Midtown. I usually get the $10 Classic Tonkotsu ("since 1963"), or the Spicy Garlic (which doesn't hold back in either department), or the Kogashi, with its dollop of cod roe and kernels of corn (and all the other good stuff). And I always leave happy. 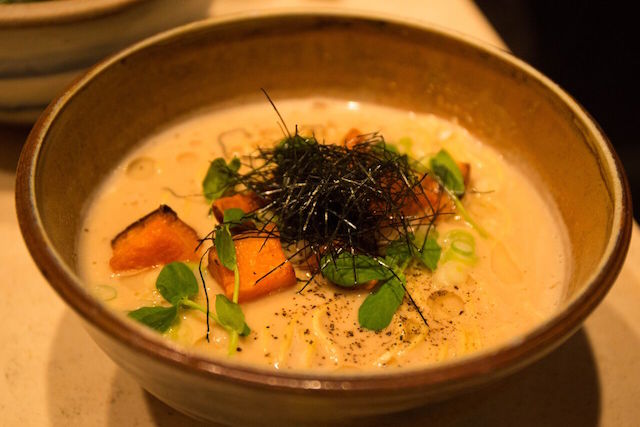 YUJI RAMEN: Chef Yuji Haraguchi essentially opened three new restaurants on Ainslie Street after abandoning his noodle counter at the Bowery Whole Foods, which isn't quite as crazy as it sounds because they're all in the same, tiny space. During the day, you've got Okonomi (roasted fish with sides) and Saturday and Sunday nights belong to a ten-course Ramen Omakase (good luck getting reservations). Luckily, on weeknights you can actually get a seat, along with a full menu of Yuji's top-tier noodle creations. These are the most successfully creative dishes in town, with ingredients like cod milt, housemade almond milk, and creamy monkfish liver broth making appearances on the frequently changing menu. Stalwarts like the Bacon & Egg Mazeman and Tunakotsu Ramen are excellent too.

Yuji Ramen is located at 150 Ainslie Street, between Lorimer and Leonard in Williamsburg, Brooklyn. (okonomibk.com). Only open on weeknights 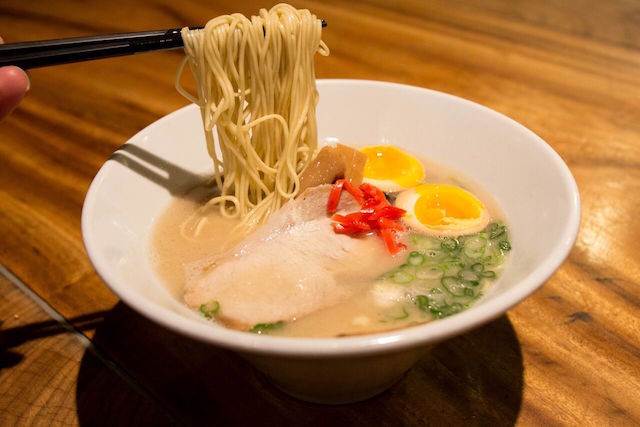 IPPUDO RAMEN: Forget, for a second, about the 90-minute waits. On a Tuesday. At 5 freaking o'clock. Because, despite their ridiculous years-long popularity (and expansion to Midtown), Ippudo is still putting a whole lot of love into their bowls of ramen. The appetizer and booze menus are much longer here than at most ramen-yas in town, which doesn't help with table turnover. But a couple of recent visits to the original East Village location, including one after the massive kitchen re-tooling, show that these guys' noodles-and-broth game, whether the Tonkotsu (classic, spicy, or "modern"), the Shio, or the Shoyu, remains strong. 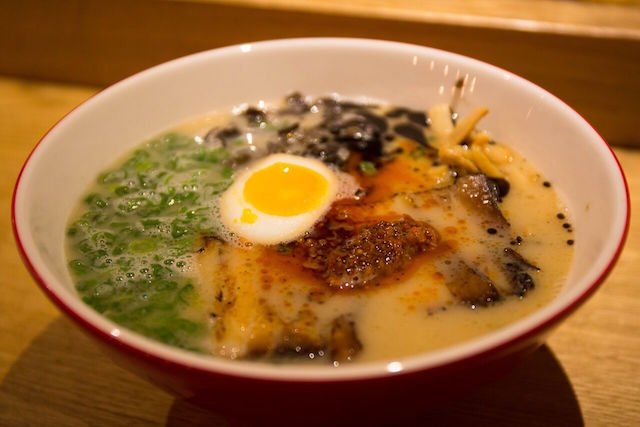 JUN-MEN RAMEN BAR: Ignore the generic condo-esque exterior at Chelsea's Jun-Men (and forgive the cramped, slightly awkward interior) and get ready to slurp up some of the most exciting new ramen in town. The surf-and-earth Uni Mushroom Mazemen gets most of the Instagram love here, and deservedly so, because it's beautiful and delicious. But the Pork Bone, the Miso, and the super-fiery Kimchi will make you happy too. Owners Jun and BoMee Park are gracious hosts, and I can't imagine they won't be operating out of bigger digs sometime soon. 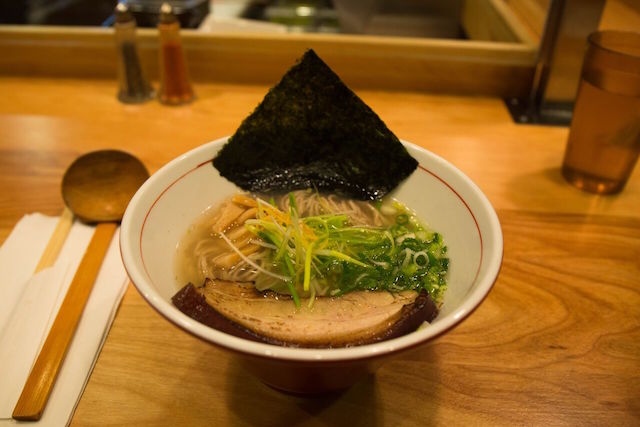 MR. TAKA RAMEN: From a Michelin-noted ramen shop in Tokyo to Allen Street on the Lower East Side, chef Takatoshi Nagara is living out his noodle-fueled dreams. Which is excellent news for all of us, because though it's only been open for about four months now, Mr. Taka so consistently cranks out first-rate bowls of ramen—made with Sun Noodle noodles—that it's earned an inclusion here. The Spicy Miso is no joke, heat-wise, and deeply satisfying, but it's the bright and lively Yuzu Shoyu ($14.50) that's my usual order. 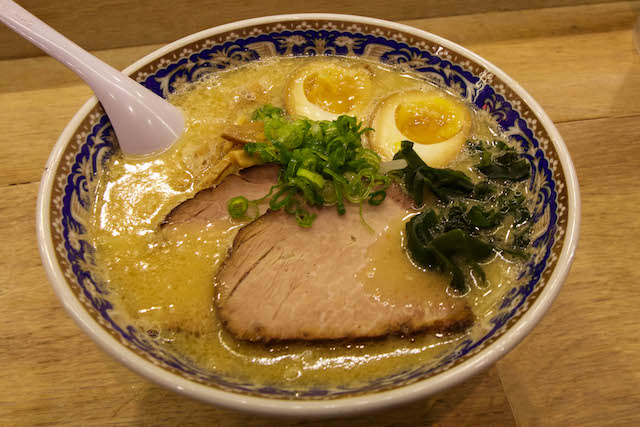 RAMEN LAB Every few weeks Sun Noodle brings in a different crew from some of the best ramen-yas around the world, who showcase a signature dish or two at this incubator before moving on and making way for the next team. It's like an never-ending noodle pop-up right there on Kenmare Street, and the pleasure is all ours. You don't go to Ramen Lab for comfort—there's always a wait, and they took out the stools a while back so you'll be standing while you slurp—but for variety, innovation, and flat-out deliciousness, this place is a treasure. 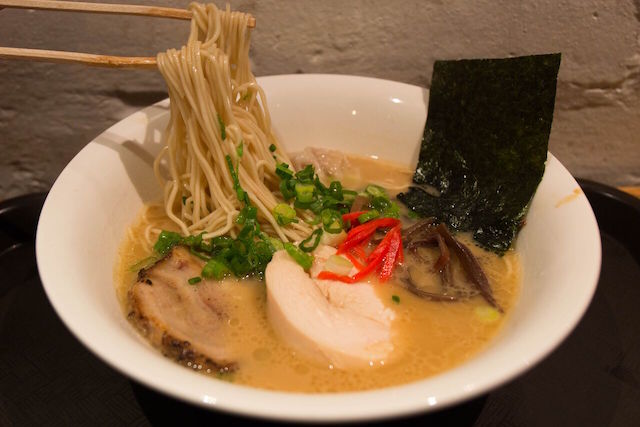 RAMEN SHACK: Keizo Shimamoto may have struck pay dirt when he invented the wildly popular Ramen Burger a few years back, but make no mistake: this guy is a serious ramen chef who can put together an excellent bowl of noodles with the best of them. Right now Keizo's Ramen Shack resides in Industry City at the Winter Smorgasburg, but this past Monday he also launched what he hopes will become a weekly pop-up at Lumpia Shack in the West Village. Wherever they surface, Keizo's marvelous creations are worth seeking out. The Tonkotsu ($10) I had at the pop-up was outstanding, and his "limited edition" Green Curry (remember: he was an early chef/consultant at Bassonova) really made me wish he'd settle down and open up a permanent Ramen Shack, preferably within a couple of blocks of my home.

Ramen Shack is located at the Winter Flea and Smorgasburg in Industry City at 241 37th Street in Sunset Park, Brooklyn. (goramen.com) 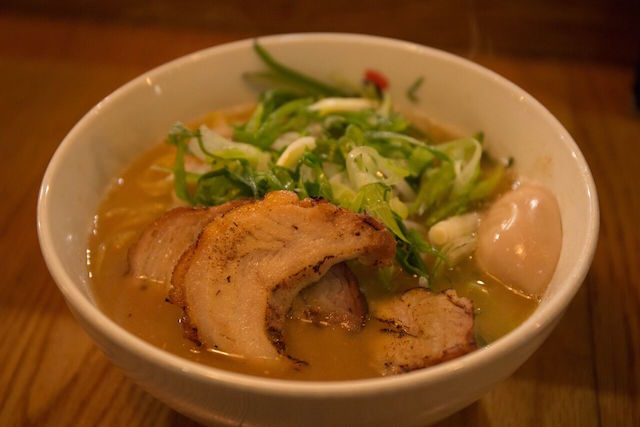 TOTTO RAMEN: All three of the Totto Ramen locations—Midtown East, Hell's Kitchen, and the best and original Midtown West—are regularly slammed with noodle fans, so expect a wait pretty much whenever and wherever you show up. But the wait is worth it for their complex chicken-based Paitan (or, "milky") broth and superbly cooked noodles. I generally get the Miso (and upgrade to spicy), but the Vegetable Ramen is pretty wild here, with its pile of raw and pickled veggies and mound of yuzu paste complemented nicely by a seaweed and shiitake broth.

Best Stoner Noodles: The Uni Mazeman at Moku Moku in Bushwick. What you'd make at home if you were 22 and high AF and had a whole bunch of perfectly-cooked noodles and sea urchin lying around your kitchen.

Best Ramen When You Don't Want To Dick Around With Long Waits At Every Other Ramen Spot:Tabata in Hell's Kitchen, right at the butt-end of Port Authority. The Dark Men, made with black sesame, is my go-to (slightly sweet and definitely different), but everything satisfies. Love the old-school, run-down vibe too.

Best Neighborhood Ramen-ya:Chuko Ramen in Prospect Heights. Not quite worth the trip if you're already near any of the above, but for locals this friendly place, with four solid options (though the Miso is the best), is gold.

Best Ramen For Chashu Fetishists: Ramen by Mew in the West Village. I mean c'mon look at those slabs of pig! This is a fun, lively spot too, especially if you're comfortable around NYU students.

Best Ramen For When You Want To Raise Your Cholesterol By Ten Points In A Single Meal: Zundo-ya in the East Village. This Japanese import, located in a roomy subterranean spot on East 10th, makes good noodles, a solid Tonkotsu, and you can choose how much pork fatback they pour into your bowl, ranging from "Light" (which I haven't tried because why bother) to "Super Rich", which is so thick and slippery that you can almost chew the broth.