There were a lot of great (and not so great) restaurant openings in NYC this year, and like many others in my field I ate at lots and lots and lots of them. One of the downfalls of my profession: I don't always get to return to my favorites as often as I'd like. With the emphasis always on the new, there's a compulsion to give a newcomer a try rather than seek comfort in what's loved and familiar. Plus: dining out can be expensive, especially at flashier spots.

So while there were some blockbuster—and critically acclaimed—additions to the dining scene this year like Fredrik Berselius's Aska reboot and the flashy Le Coucou (both worth visits, if you can swing it), for this list, I'm focusing on spots that I'm eager to return to that don't necessitate a special occasion or lots of disposable income.

Here are the best new restaurants of 2016, presented in no particular order: 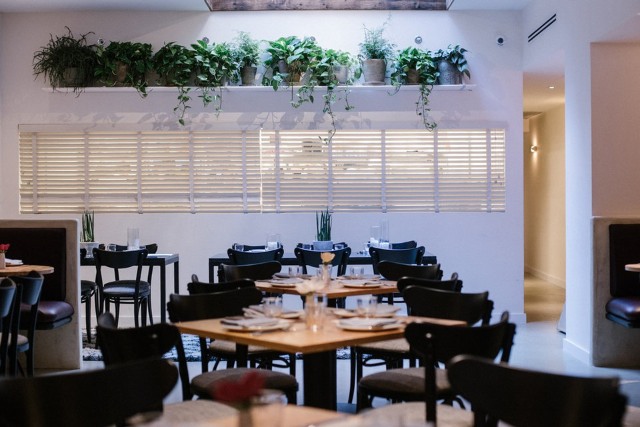 NIX We're in the era of the "vegetable-forward" movement and the proliferation of vegan restaurants, while juice bars and health food still reign. 'Good for you' food is all well and good, but blessings upon chef John Fraser's vegetarian restaurant for making clear that vegetables don't have to be self-righteous—they can be sin (and butter and cream) incarnate. Other than being vegetarian, the restaurant is pleasingly idiosyncratic, drawing from global inspirations to produce an eclectic menu of veggie-friendly dishes.

Fraser and chef de cuisine Heather Machovec captured the "cacio e pepe" craze of 2016 with an addictive shiitake "cacie e pepe" over creamy polenta, and whatever their seasonal fry bread offering happens to be that day, it's the belly filler for the ages. If there's an adult in your life who claims to hate vegetables, this is an excellent place to tell them to grow up and embrace the garden. 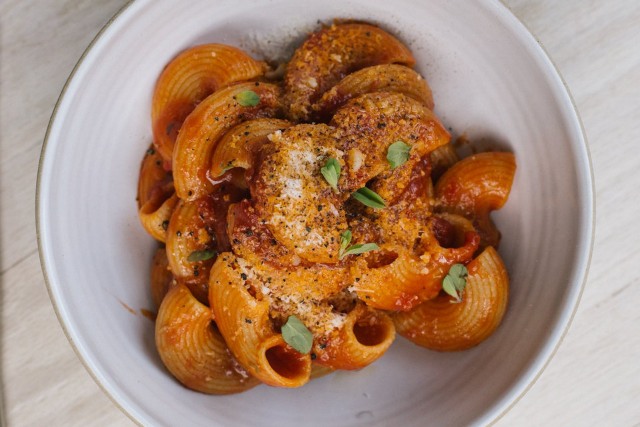 LILIA Missy Robbins blew into Williamsburg in a big way this year, opening this buzzy Italian spot on Union Avenue. It didn't take long for reservations to become a challenge, something unlikely to change given Lilia's lauded status on this list and many others. But with determination you, too, can dine at Lilia; and if you can, you should.

Robbins knocks it out of the park with her pastas, especially the agnolotti stuffed with sheep's milk cheese and drenched in an addictive sauce of saffron, tomato, honey, and what we can assume is a healthy knob of butter. Don't sleep on the bagna cauda, either; now's not the time to be put off by "warm anchovy" when it's such a delectable dipping sauce for crunchy vegetables.

With an upbeat soundtrack that's often heavy on the '90s hip hop, Lilia is one in the next generation of Williamsburg restaurants focusing on upscale dining to lure in the newer influx of well-off residents, however that makes you feel. 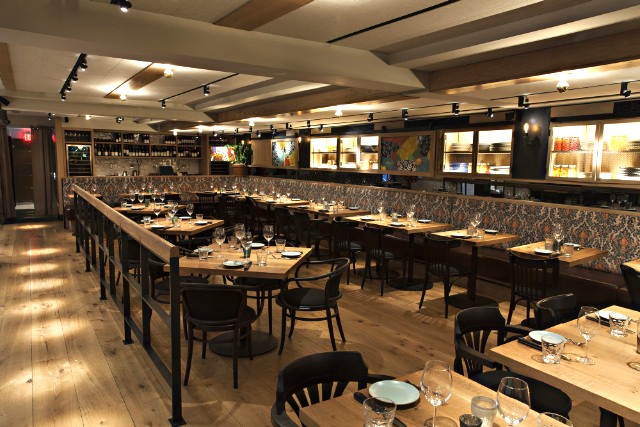 COVINA There were plenty of flashy hotel restaurant openings this year, including Tim and Nancy Cushman's romantic, globally-inspired eatery inside the Park South Hotel. Kips Bay isn't historically a dining destination neighborhood, but Covina now joins the ranks of go-to restaurants—Marta, Upland, The Cannibal—that are nice enough for a special occasion but approachable enough for a last-minute meal.

Pizza and pasta brought carbs back into style this year, too, and this spot is no exception. Approachable options like a Pepperoni & Soppressata pizza share menu space with a hearty Caesar Covina, Herb Roasted Chicken and splurgy burger made with Wagyu chuck. Sometimes the best restaurants are the ones giving you what you think you want and doing a spectacular job of it. 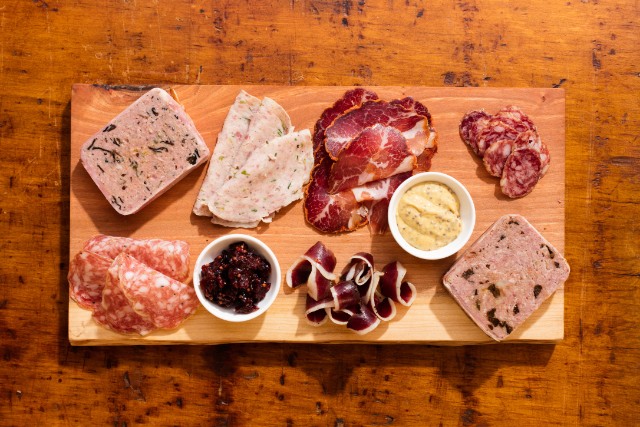 CHERRY POINT Is it pure coincidence that Cherry Point is located inside a former Greenpoint butcher shop and has some of the city's best charcuterie? Or perhaps it has to do with the chef and co-owner, Julian Calcott, a former executive sous chef at April Bloomfield's genre-defining gastropub The Spotted Pig. Regardless the reason: the charcuterie's the stuff dreams are made of—and I have, in fact, dreamed of it.

Rotating selections include different types of terrines like one made with lamb and apricots served with crusty grilled bread; tiny jars of smoked whitefish served with addictive house-made saltine crackers; and house-made labne cheese drizzled with honey. Order up some combination plate of meat-fish-cheese (many of which come with a dollop of honey or fruit paste on the side), pair it with a Manhattan, and you'll be very happy.

The neighborhood spot's romantic without being cloying, and if you need something more than a charcuterie plate, they've got filling and reasonably-priced entrees like a gigantic double patty burger with cheese and pickles. 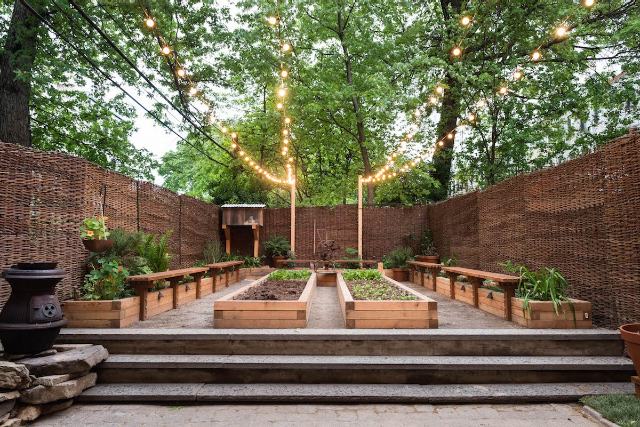 OLMSTED I don't think any other restaurant in the city garnered as much affection, praise and general laurels than Greg Baxtrom's pretty eatery in the growing dining destination known as Prospect Heights. And you won't be hearing a contrarian hot take from me.

There's the beautiful back yard with the cute (and not-for-eating) quails, twinkling lights and fragrant (edible) garden, which Baxtrom uses as an on-site produce section. The menu's never going to be quite the same between visits—though the Carrot Crepe has proved unstoppable and, possibly, un-removable—but count on exquisite dishes—that undoubtably belie their true complexity—that would be too lovely to eat if only they weren't so outstandingly delicious. 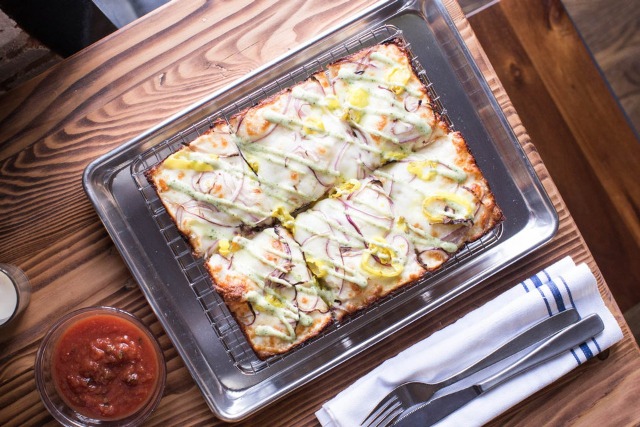 EMMY SQUARED Pizza had a great year in NYC, thanks in no small part to the robust Detroit pies flying out of the kitchen at Emmy Squared. This sister restaurant to Clinton Hill's Emily made a huge splash when it opened in April, introducing NYC to buttery, fluffy pies with that signature rim of crunchy crust. From a spicy pepperoni to Hawaiian pizza to the gourmetification of ranch on pizza, Emmy Squared filled bellies in a substantial way in 2016 and will likely continue to do so for years upon years to come.

And if all that dough somehow left you still unsatisfied, the restaurant regularly offers an off-menu burger, Le Big Matt, that's NSFPC (Not Safe For Public Consumption) while retaining one's dignity. 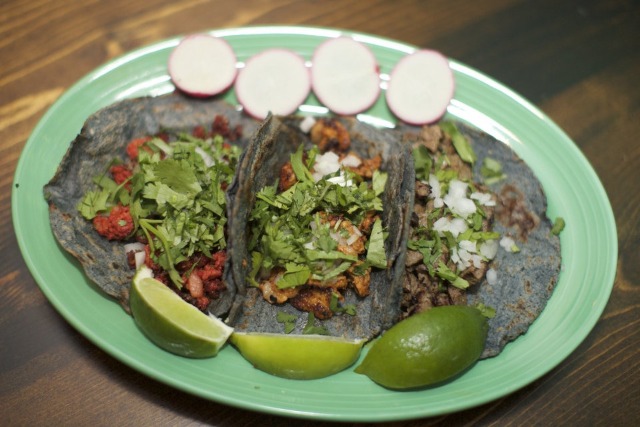 EL ATORADERO Both Quick Bites columnist Scott Lynch and I agree: El Atoradero is freaking rad. While the Bronx undoubtably misses its homegrown hero, Brooklyn gained quite a bit when Denisse Lina Chavez moved her operation to Prospect Heights. Everything's outstanding, including her legendary carnitas, and pretty much everything you order with the restaurant's homemade tortillas is going to be a soul satisfier, especially their ridiculously good nachos.

Soon, the team will be opening up an adjacent mezcal bar. Hopefully, you can order the nachos there, too. 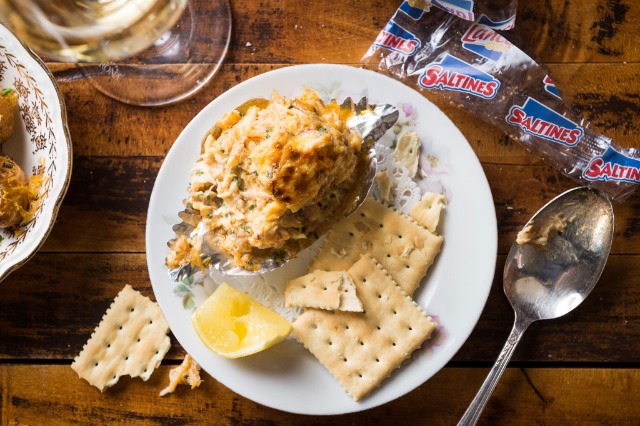 MR. DONAHUE'S Put simply: Mr. Donahue's is adorable. There's barely seating for 10, the ceramic dishware looks like retro diner meets grandma's china cabinet, and the food, well, it's as cute as it is tasty.

To put a diminutive marker—who wants to be "cute" when they could be beautiful?—isn't to diminish from the fine and sometimes substantial fare coming out of the kitchen. It's just that it fills you with such a warm, cozy feeling to dine there that not even Russian teenagers sucking face and Snapchatting their SoHo purchases can really distract from what fun you're having.

Riffing of the classic "meat-and-three" structure, meals could go something like: Chicken Fried Pork Cheeks, Steamed Artichoke and Crab Imperial with pepper gravy. Or medium Steelhead Trout with Pickled Beets, Deviled Duck Egg and Herb Garlic Sauce. Both just $19.99—for the whole shebang. 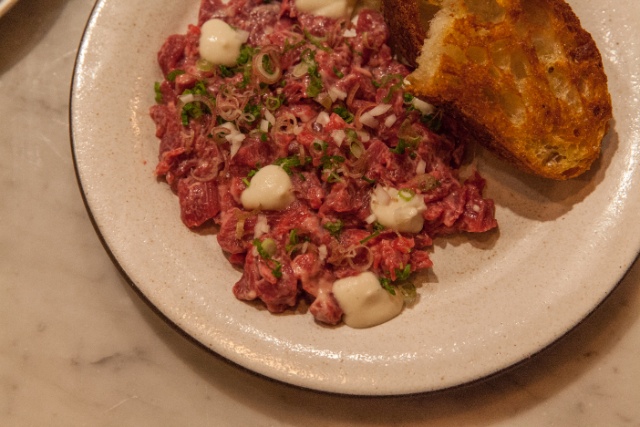 DINNERTABLE When they ran the show at dinnertable in the East Village, husband-and-wife Chefs Scott Tacinelli and Angie Rito made a big splash with their unique and delicious pastas, which they're now doing business with elsewhere. Taking over is Chef Ricardo Arias, who has put a Japanese accent on dishes like Crispy Uni Paella Balls, Beef Tartare flavored with onions four ways, and a gourmet Dinnertable Dog with a miso sausage and a wasabi pea salt on the side to sprinkle on.

The vibe's more stoner chic now (I'll let you find the decoration that gave it away) and Arias's ebullient personality is well-suited to the intimate dining experience. Grab a seat at the counter overlooking the modest "kitchen"—peep the teeny, tiny deep fryer they're forced to use—and enjoy a bit of a show along with your supper. 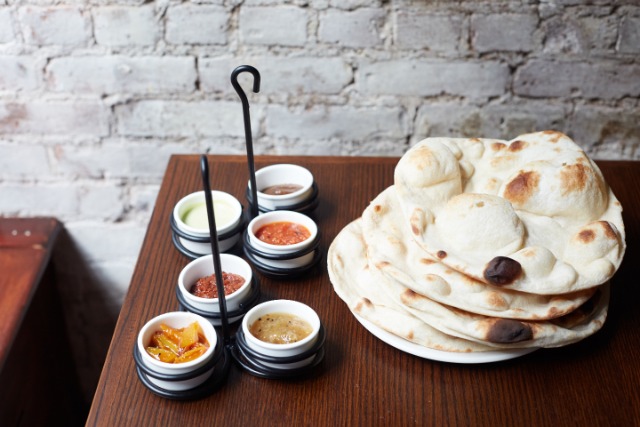 PAOWALLA If you get down with breads, you will be very satisfied dining at Floyd Cardoz's cute South Village restaurant, where an entire page of the menu focuses on naan, roti and stuffed bread. If you get down with vegetables, you will also be well-sated, with dishes like Shishito Pakoras festively dressed with peanuts, cilantro and ruby orbs of pomegranate seeds or one of the many chutneys that can accompany the aforementioned breads.

And if you eat meat and eggs, dear reader, you shall be well-fed indeed. Cardoz's famed Egg Kejirwal—a deliciously deceptive dish that hides an egg beneath a slab of cheddar cheese with a wildly delicious coconut chili chutney—is one of the year's best dishes, hands down. The Baby Pig Vindaloo, fiery with chilies and garlic, is damn good, too.

In short: this restaurant is a crowd pleaser for anyone, including those who imbibe alcohol. Don't miss out on the delicate Blossom Rose, served in a champagne-like flute filled with gin, lemon, cardamom, creme de rose and cava. 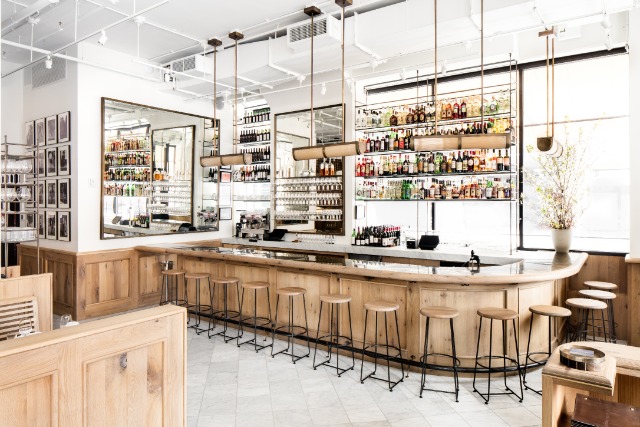 CAFE ALTRO PARADISO The team behind Estela in Nolita had a busy year, opening two new restaurants—one downtown, one way uptown—in 2016. I'll confess to not having made it up to their new Met Breuer restaurant, but if it's anything like their other newcomer, Cafe Altro Paradiso, then there's yet another reason to dine on the Upper East Side.

Back downtown, it's (admittedly pricey) small plates that justify their price in quality, execution and deliciousness. In fact, if you don't want to venture north of $22, you'll get plenty full on dishes like gooey-centered arancini, a suggestive sausage and beans dish, and easily shareable plates of seasonal pastas like orecchiette with nduja sausage, all priced under $22.

It can get a little shouty as the evening wears on—the well-rounded wine list of mostly Italian origin may help to explain that.

If you don't need to feel your tongue for a few hours: MáLà Project
More proof Prospect Heights is a slammin' dining destination: Faun
If you like to swing [during] your supper: LaRina Pastificio e Vino
Stunning in SoHo: King
Hummus that'll change your life: Dizengoff
Outstanding shared plates you can actually share: Freek's Mill
Great food hidden on a historic West Village street: Fifty