The 11 Best Nachos In NYC

As much as I hold my beloved Nacho Helmet to my squeezy cheez-loving heart, true nachos aren't served out of an oversized plastic Yankees hat—though I'd be delighted if they were! Nachos do come in all shapes and sizes, though, from artfully plated and delicate versions to piles of cheese and toppings so dense you can't even see the chips buried beneath. Below, we outline some spots doing right by NYC's nacho cred; be sure to proclaim love for your favorites in the comments. 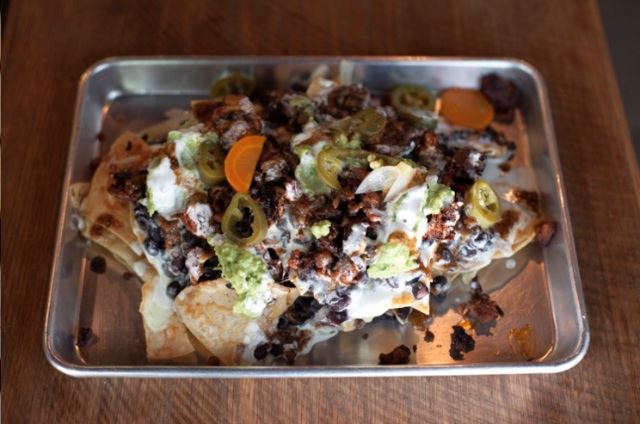 TAQUERIA DIANA There's a special joy to be on the receiving end of an enormous tray—yes TRAY—of nachos; the fleeting moment when you think you'll have a chance in hell of finishing said tray, the inevitable satisfied defeat when you realize you can't. The Nachos here are about the size of this 2nd Avenue establishment, which is to say that they are huge and the space is not. But what it lacks in space (and seating), it makes up for in ability to put down a professional eater with the heft of its tortilla bounty.

It's not all about size, as their nachos taste pretty damn great, too. The basic cheese version ($7.58) is a tangle of white cheddar cheese with jagged freshly-made tortilla chips dotted with pickled carrots and jalapeños, a choice of beans and a dousing of sour cream. Add meats as you see fit (pollo, al pastor, carnitas and a vegetarian poblanos/corn are $9.87; carne asada $11.25) and squirts of fiery salsas from the bottles on the counter, then prepare your body for inevitable food coma. 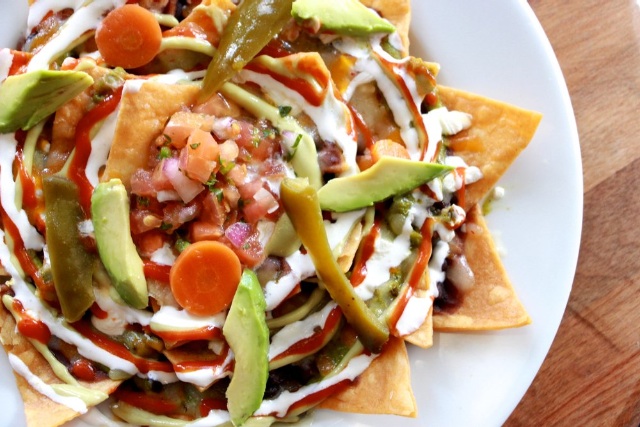 LA CONTENTA This tiny, romantic Lower East Side hideaway serves the most dignified and beautiful plate of nachos in New York City. Salty, crunchy tortilla chips are arranged Fibonacci-style in a pleasing circular pattern, their pointy edges pointing skyward for easy grasping while their lower halves lounge languidly in a savory goo of poblano cheese sauce, slightly mashed black beans and a draping of melted monterey and cheddar cheeses.

Good looks and taste aside—and they are delicious, to be sure—these nachos are a winner for their expert division of labor. No single chip overly-burdened, no empty chips left to languish on the plate unadorned. In short, the perfect plate of nachos, and during happy hour they are only $8, down from $10 the rest of the evening. 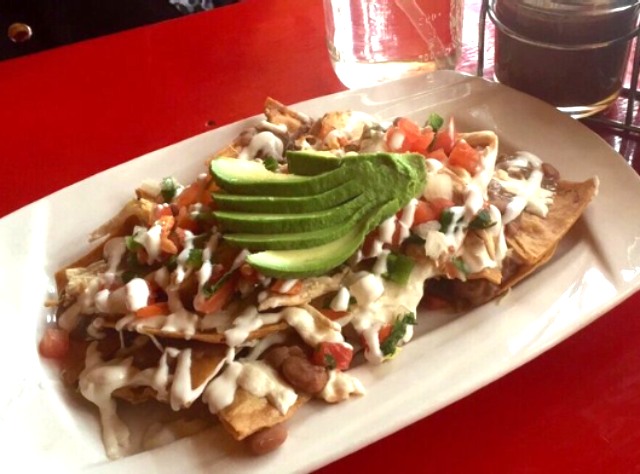 TORTILLERIA NIXTAMAL Anything tortilla-based coming out of a spot that's making their own from scratch—and shipping them out to other Mexican eateries, no less—undoubtedly does a quality nacho, where the tortillas are of utmost importance. This cheery Corona spot fits all of the above requirements, offering a version of Mexican Nachos ($9.25) using their nixtamalized corn tortillas, cut into wedges and fried, then festooned with stretchy Oaxaca cheese, heaps of creamy pinto beans, zigzags of crema, scoops of pico de gallo and half an avocado, sliced and resting comfortably atop the entire proceedings.

You can add meats—the al pastor suits the nachos just as well as the tacos—for a few extra bucks, but the fresh tortillas are the star here and they don't need to be upstaged by any further accoutrement, save for some pickled jalapeños to keep your tongue awake. 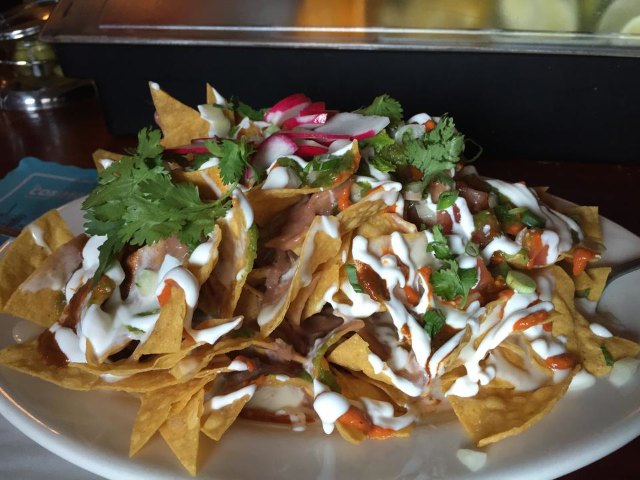 THE COMMODORE/EL CORTEZ Yes, these are technically two distinct retro bars in western Brooklyn, but with the same ownership comes a nearly identical take on nachos at the two joints, thus we're mashing them together for our purposes today. Both employ white queso for their cheese component, a move that can sometimes result in a soggier chip—all the more reason to consume quickly! If the chips look a little bare on the outset, consider the hidden well-spring of molten cheese hiding at the bottom of the plate.

Refried pintos up the creaminess component, as does a dousing with crema. Heat levels vary depending on which of the three salsas you get, though none are so tongue-scorching as to maim. The freshness factor comes from raw radish, a handful of cilantro and chopped scallions, the more so you can fool yourself into believing nachos are a health food. A heaping pile of tortilla chip salad runs you $10 in Williamsburg and $12 in Bushwick. 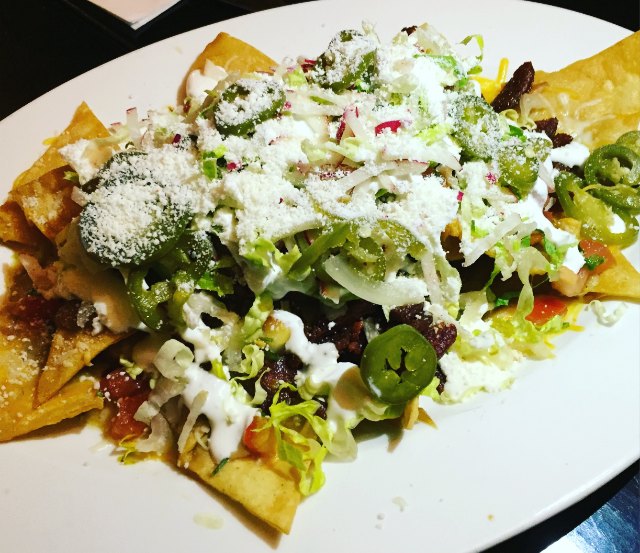 TAQUERIA KERMES This unassuming Ridgewood restaurant does a swift delivery business, as noted by the rush of bundled men scurrying in and out at a rapid pace during a recent visit. But nachos ($9.99 here) are best enjoyed a la minute, before the cheese cools and the tortillas wilt under the weight of all the delicious toppings. Here, those toppings include a burst of fresh flavors and textures courtesy of shredded iceberg lettuce, diced tomato, radishes and pickled jalapeños, acting as a foil to the onslaught of heavy dairy and meat products.

A simple mix of jack and cheddar cheese are used to great effect, acting as a binding agent for the refried beans and meat, if you opt for it. Get the chorizo ($5) for its pleasant snap and salty, spicy flavor. The restaurant doesn't have a liquor license, but you can snag a $3 Mexican coke and enjoy it on their back patio when seasonable temperatures permit. 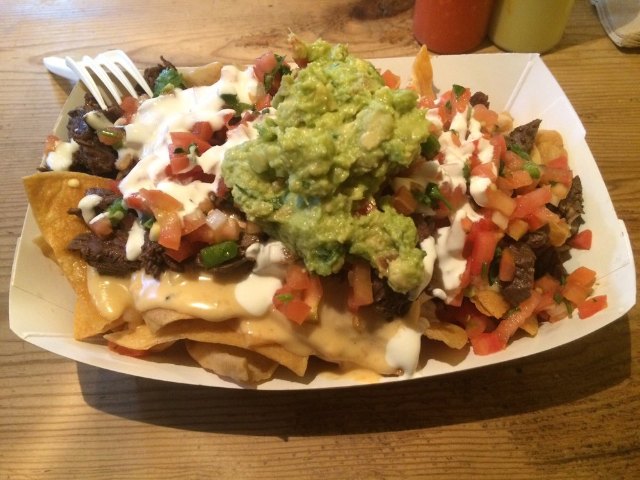 GUEROS End your dazed summer days (or dazed anticipatory summer days) at this unassuming Crown Heights storefront. With the tacos inventive and somewhat delicate at $4 a pop, it's necessary to balance a couple tacos with a plate of nachos, which are anything but delicate. Loaded with signature queso, pico de gallo, sour cream, and salsa, these are nachos that seem like Mary Poppins's bag: full of surprise and seemingly limitless. What is limited, though, is space, so don't be surprised if you have to teeter on bar stools or lunge to get a table in the sun. One of Gueros' exceptionally strong frozen margaritas, however, will help salve any wounds incurred. (Sarah Edwards) 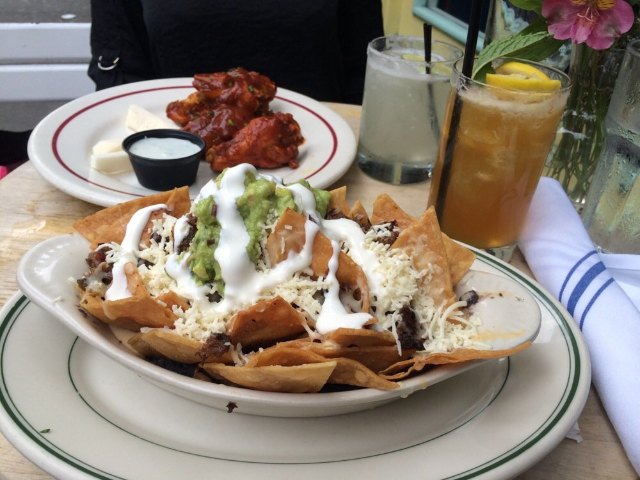 COPPELIA The expansive menu at this 24/7 eatery opened by Julian Medina has pan-Latin influences that range from Cuban sandwiches to Colombian and Venezuelan arepas to dishes reminiscent of Medina's upbringing in Mexico City. Of course, his version of nachos ($8.95) fits nicely into that spectrum, though it's unlikely Gouda made appearances in versions from his childhood. That's not the only unique cheese employment here; the chef layers his chips on top of a molten well of gouda, then sprinkles on shredded gouda and muenster on the top, letting much of it remain in its uncooked form. Traditional nachos these are not.

Interspersed with the dairy are tender pieces of short rib, another unusual nacho ingredient, plus black beans and jalapeños, as to be expected. The entire mess of chips is finished off with a scoop of guacamole and a slick of crema. 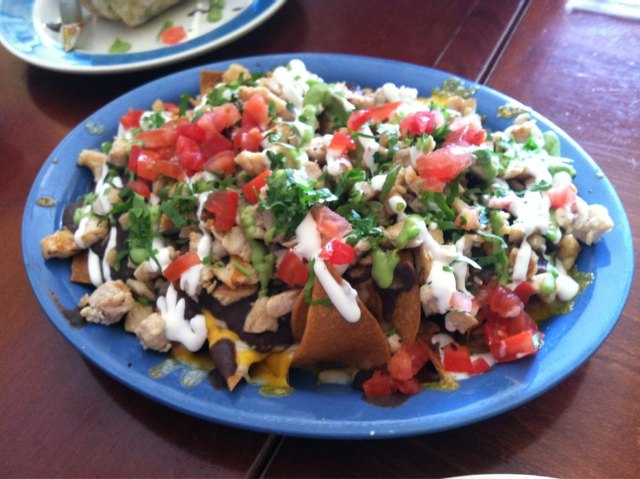 TAQUERIA TLAXCALLI You won't find them listed anywhere on the menu, but this Mexican eatery in the Parkchester section of the Bronx will whip up some superlative nachos for you—just ask! Their Chicken Nachos ($9.75 small, $14.10 large) earn high praise from regulars who supplement their orders of festive-looking burritos with a plate piled high with chips and cheddar-style cheese.

If chicken isn't your jam, opt for steak, chorizo or spicy braised pork instead, but regardless you'll be presented with a plate overflowing with ingredients including their house-made chips, a boatload of cheese and soupy black beans plus uncooked toppers like cilantro, crema, tomatoes and avocado sauce. 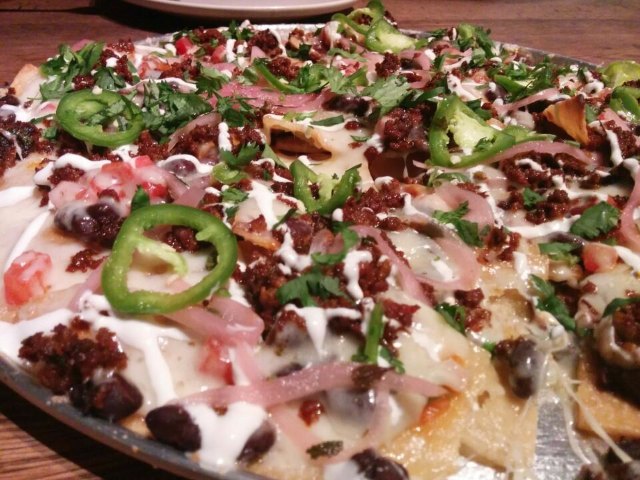 EL VEZ The single-layer nacho is often claimed by Texas, whose philosophy on nachos looks vastly different from the piled-high versions commonly found at our bars. Though not a Texas spot per se, the Nacho Mama ($15) arrives more or less as a single layer of chips, each lacquered with melted jack cheese that anchors black beans, pickled onions, jalapeños and tomatoes. There's no borrowing from a neighboring chip for balance, since there's even dispersal of most of the ingredients. 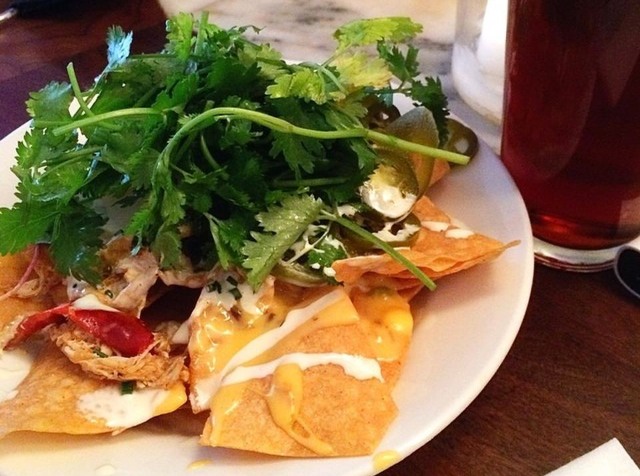 RIVER STYX If nachos have the ability to be Dadaesque, the version being served at this quirky Greenpoint eatery are the closest to qualify. It's not that what they're using is all that unusual—cheese sauce, meat, jalapeños, cilantro—it's the presentation that refuses to embrace a common structure. There's no attempt at balance, no restrained hand when it comes to the piles of toppings. It's just a plate on which ingredients seem to have been thrown, letting the diner put together their chip dream team on the fly.

The nachos come in two sizes: a more dainty appetizer version for $10 and a heartier entree size for a nacho deep dive at ($18). Both employ chicken tinga, a spicy shredded chicken dish with chipotle, and both will come with crunchy raw radishes, pickled spicy things and, typically, a fistful of cilantro. Those afflicted with the "cilantro soap" disease can easily remove the offending herb from their plate. 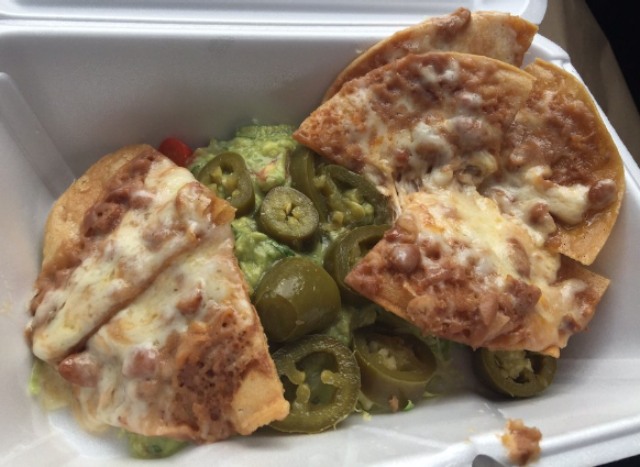 TACOS MATAMOROS These nachos aren't going to win any style awards and they're not trying to reinvent the wheel. These are Slanket nachos, chicken noodle soup nachos, the Rick Astley of nachos. But what they lack in curb appeal they make up for in genuine deliciousness and unoffensive delight. Oversized tortilla chips are individually topped with slice of Muenster cheese and refried pinto beans then circled around a pile of shredded iceberg lettuce, guacamole and pickled jalapeños.

Want some meat? They've got chicken, beef, chorizo and even shrimp. Best of all, these nachos are ridiculously priced at $6, so you'll have plenty of pennies left over to sample some of the restaurants excellent tacos, tortas and chilaquiles with budget to spare.

#best nachos
#best of gothamist
#nachos
#original
Do you know the scoop? Comment below or Send us a Tip