One of New York's greatest assets (and, if you live above a bar, a terrible detraction) is its around-the-clock energy—bars here close at 4 a.m., subways close never, and people are screaming outside your window at all hours. Of course, all those screaming people must be fed, and so must you, even if it's 3 a.m. and your preferred pizza place closed hours ago. Here are our favorite late night dining spots around town; as always, leave yours in the comments. 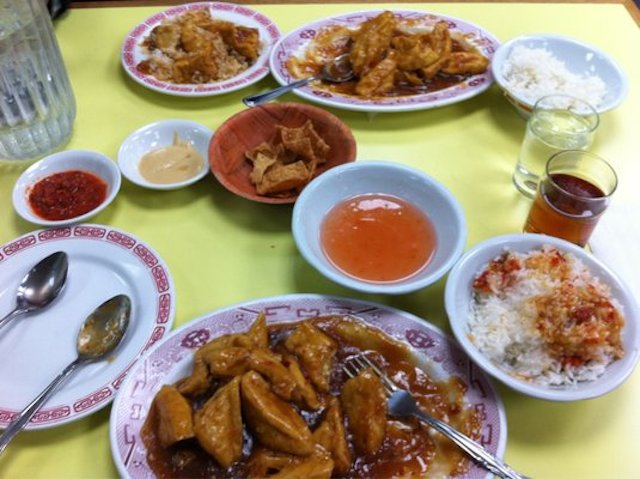 WO HOP: Avoid the week-old crab dumplings in your fridge, no matter how plagued you are by drunchies: this Chinatown spot serves stellar Chinese food at all hours (except in fake snowstorms), and for low prices. Wo Hop's menu is massive and runs the full gamut, offering everything from cold sesame noodles ($4.50) to chicken/pork/vegetable/shrimp lo meins ($5-$8) to a variety of sweet-and-sour proteins ($8-$12), and all the things in between. Make sure you get a table downstairs, and be prepared to wait even late into the night; the restaurant is tiny, and its refusal to shut its doors makes it a prime destination for LES and Chinatown nightcrawlers. 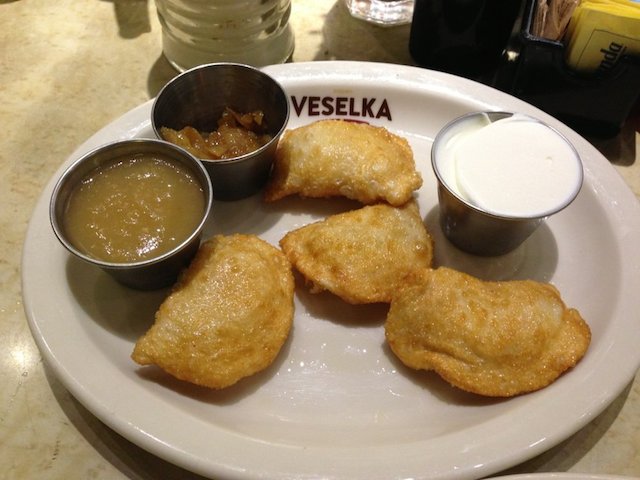 VESELKA: Few foods soak up a long night out more successfully than pierogi, those delectable little boiled and fried dumplings stuffed with booze-soothing things like cheese, meat and veggies. And Veselka, Second Ave's longstanding 24-hour Ukrainian joint, is a prime spot for scoring said treats after a particularly brutal night out in the East Village. Pierogi come stuffed with your choice of potato, cheese, meat, spinach and cream cheese, sauerkraut and mushroom or arugula & goat cheese, with four-piece plates running $6.95 and 7-piece plates running $10.95. If, inexplicably, pierogi are not your thing, opt for Veselka's borscht or chicken soup ($4.95-$8.95), try the keilbasa ($17.50) or brave the stuffed cabbage ($15.75) before heaving yourself home. 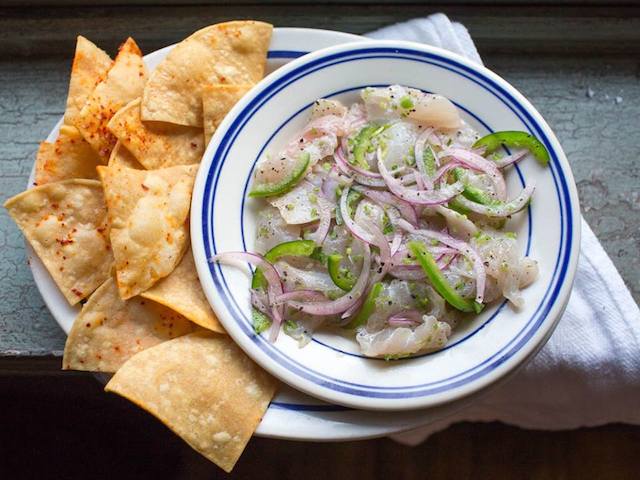 EXTRA FANCY: You've been hitting the town for hours when you realize you'd better get food into your stomach before a regrettable alarm clock tomorrow. What do you need? Why oysters, of course, and you'll find them at this Williamsburg spot that offers a very-special Late Night menu from 11 p.m. until 2:30 a.m. daily. Slurp down oysters ($3.50), little neck clams ($2) and cocktail shrimp ($3) until the wee hours of the morning, with extra garnishes like trout roe, caviar and other additions you may not remember the next day. You can still be fancy even if you're shitfaced.

But if dainty seafood won't cut through the six pina coladas you sucked down in the preceding hours, you'll be rewarded for waiting to eat with one of the world's best comfort foods: the patty melt. They're offering several sizes and varieties of this burger riff, including a single patty ($12) topped with melted onions and NY cheddar, up to a Triple (add $6) with a whopping three beef patties. Add some Southern flair with pimento cheese (add $2), a Breakfast version (add $3) with bacon and egg or the super baller Phatty Melt (add $20) topped with a lobe of Hudson Valley Foie Gras. (Nell Casey) 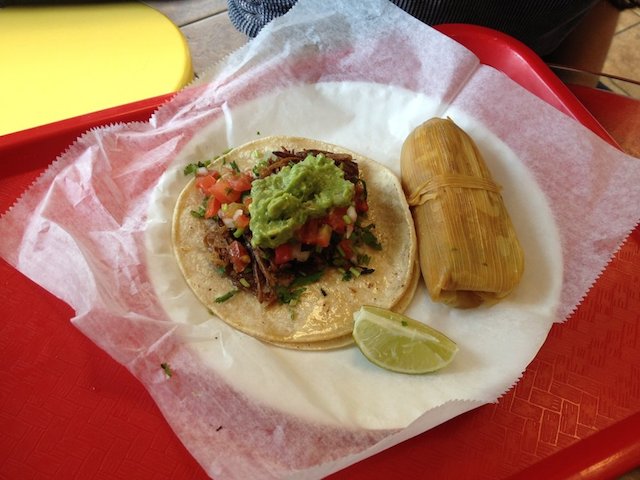 EL AGUILA: With its three locations lining Lexington Avenue, El Aguila seemingly has a Mexican monopoly on Manhattan's Upper East Side and Harlem. Though only the two Spanish Harlem locations stay open 24/7, all three spots serve up a wide selection of burritos, tacos, tamales, tortas, panes dulces, and Mexican beverages. Value and preparation form a perfect union at El Aguila, where you can get an authentic lengua (tongue) taco ($2.50) or al pastor burrito ($6) on house-made, plancha-heated tortillas laden with fresh toppings and spicy salsas. In keeping with their open-all-night spirit, breakfast burritos and egg-based options are apparently available at all hours too! (Ben Miller) 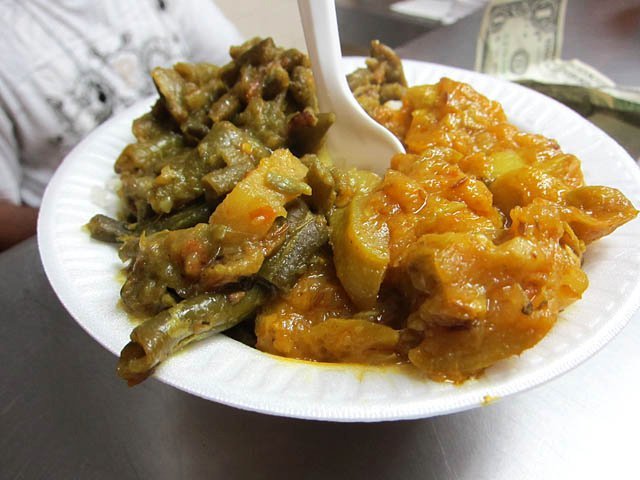 PUNJABI GROCERY & DELI: This indispensable and affordable LES mainstay, open 24/7, boasts an array of refrigerated vegetarian Indian options to be microwaved on site and consumed on paper plates (formerly styrofoam) to your heart's content. Some favorites among the cabbies and hungry East Village bargoers who frequent this subterranean spice paradise include their samosa with chickpea curry ($3) and double veggie-topped rice bowl ($4 small, $6 large). The place has struggled to stay in business due to never-ending construction on East 1st Street, but the community rallied in support and the DOT agreed in May to add a taxi stand to help Punjabi's loyal customers keep coming back for more. You can join them with or without a hack license. (Ben Miller) 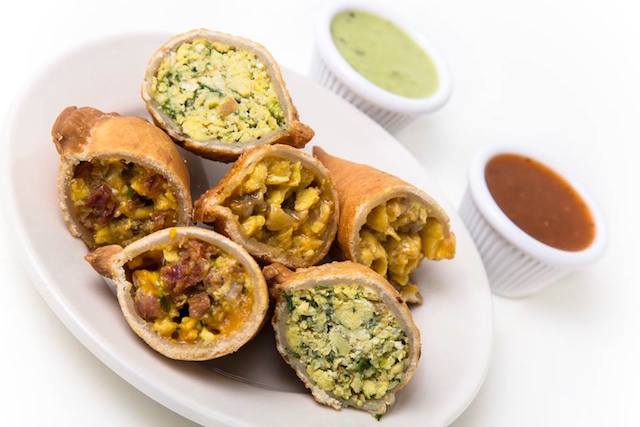 EMPANADA MAMA: Empanada Mama has been heralded as one of the kings of late night eats in Manhattan, serving up Latin American staples round-the-clock for nearly a decade. Though its Midtown space is modest (read, narrow), there's usually plenty of seating, and what's a little claustrophobia when you're famished at 5 a.m.?

Empanada Mama serves everything from arepas to tapas to heavier entrees like spicy pollo alla plancha ($17.95). But if you've stumbled in post-witching hour, your best bet here is their signature dish—piping hot empanadas range from Caribbean-style roast pork "reggaeton" ($3.50) to hot dog and cheese "Americano" ($3.50) to classic chorizo, shredded chicken or broccoli and cheese ($3.25); you can even get $3.75 dessert-type empanadas (Belgian milk chocolate and banana, apples and cinnamon, mozzarella and plaintains, etc.) if you're craving some kind of sugary nightcap nosh. 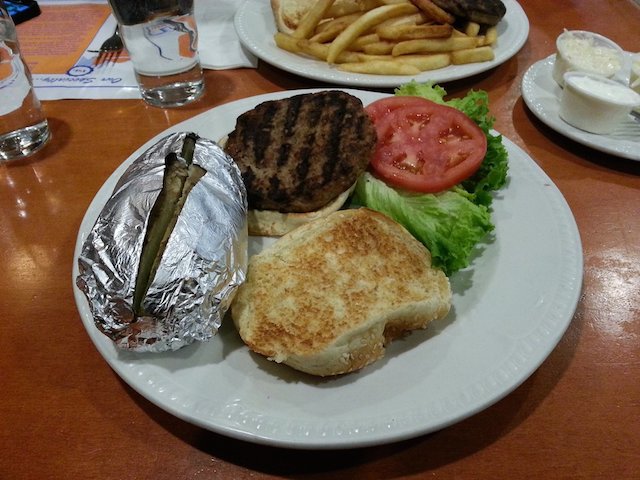 NEPTUNE DINER: Queens is the motherland for good Greek diners, and Neptune is one of the best of the bunch. The Astoria eatery has all the classic diner fixings, like a menu that could double as a novella, display cases filled with cakes and pies, old-school clientele and a bowl of hygienically-questionable self-serve soft mints by the register. They serve all the usual diner goods, but they do Greek food best. Try a chicken or lamb gyro or spring for a big gyro platter with fries, and maybe consider walking home to burn off some of that tzatziki. 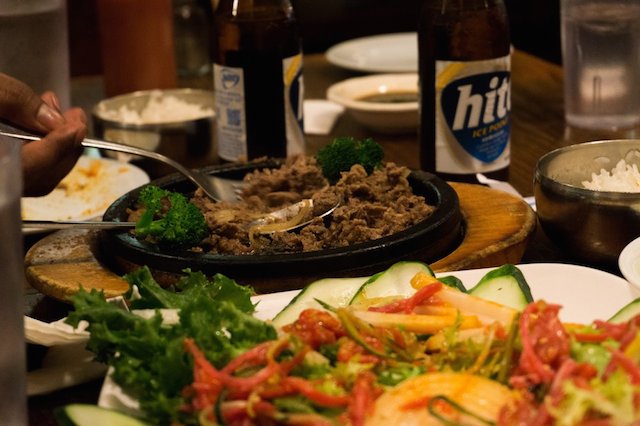 HAN BAT: Nothing pairs quite as well with a late-night Soju bender as Korean barbecue, and 24-hour Koreatown joint Han Bat is prime fodder for hitting the pre-hangover spot. The key here is to go with a group and order, like, everything—bibimbab ($10-$14) is a sure bet, as is bulgoki ($18), gam ja tang ($13-$15) and any pork belly dish. Note that Han Bat isn't exactly the sort of place you'd bring a foodie, but as one Yelper so adequately put it, "Is this the best korean food you'll ever get? Probably not. But is this some of the best korean food you'll get at 3am on a Tuesday night? Very possibly." That's all you can really ask for in a dazed state, after all. 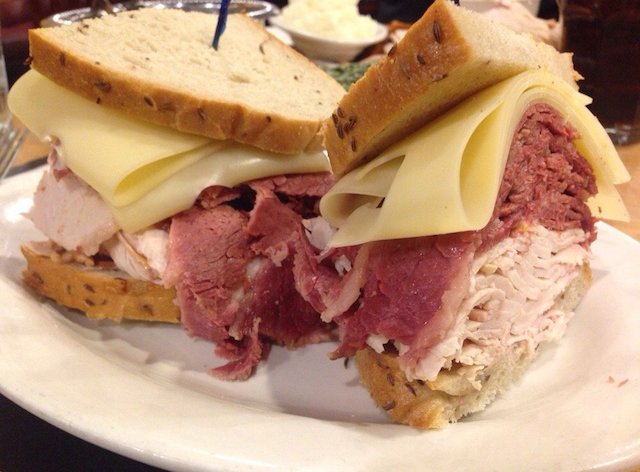 SARGE'S DELI: Sarge's Deli was shuttered when we put a list like this together last year. Thankfully, though, the city's best all-hours deli has since returned, once again giving New Yorkers the chance to shove as much meat into their stomachs as is legally permissible post- 2 a.m. The hot pastrami ($16.95) is the thing to get here, of course, and it's enough to feed two people, though you may feel inclined to eat the whole thing if night has blinded your ability to experience hunger. If that won't do, there are a whole host of sandwiches, burgers, soups, salads and slaws that get served up at all hours, but seriously, if you're there, get the pastrami. 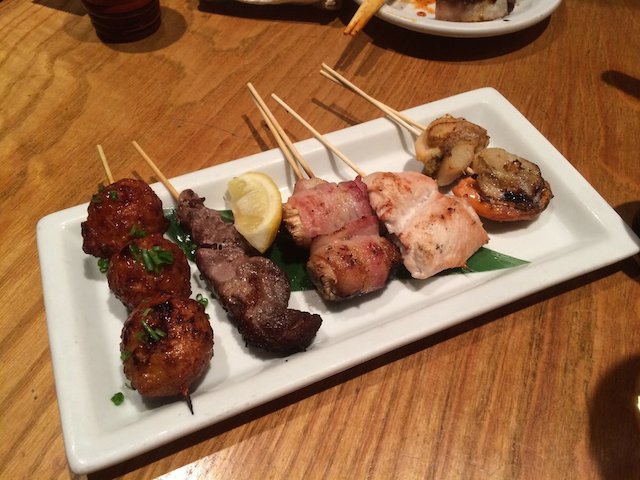 SAKE BAR HAGI: Late-night dining doesn't have to consist of diner or deli food (though both, as evidenced by this list, provide exceptional options). But for something a tad bit more interesting, this Midtown spot serves up sushi and izakaya until 2 a.m. The mentai pasta ($9.50), made with a spicy cod fish roe, is a particular favorite, as is the sashimi salad ($12) and any of the yakitori. As the name suggests, Sake Bar Hagi also serves a wide variety of sake, should you want to keep the party going late into the night—they also offer late night and midnight specials specifically for after-hours eaters out looking for a deal. 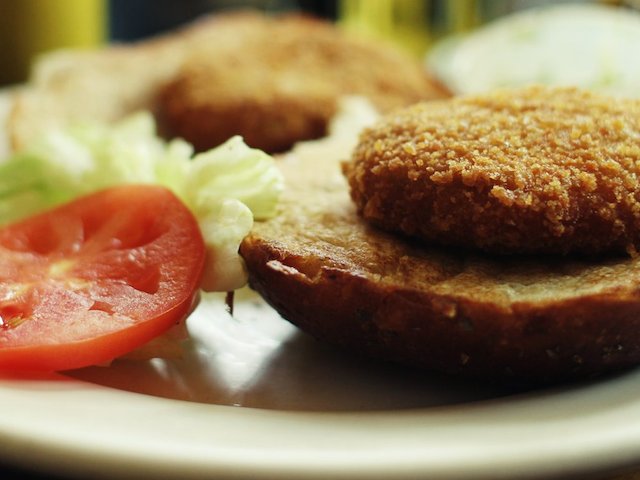 PARK PLAZA RESTAURANT: This Brooklyn Heights diner has saved at least one Gothamist staffer's life/liver on a late, inebriated night, and it can do the same for you! Like all good diners, Park Plaza boast a massive menu featuring everything from hefty Greek salads to cold cut platters to all-hours omelets. The spot's got all the classic fixings, like leather-seated booths and cakes in display cases, plus there's a bar now, so you can get drunk again after sobering up with a giant plate of curly fries. Bonus points for being family-owned, double bonus points for serving an ice cream sandwich cookie.