The local food movement has a new headliner: craft cider. The fermented, alcoholic beverage has become something of an "it" drink in New York City in the past few years. The reason is two-fold: producers are creating more complex ciders for an audience that craves it, and production is way up in New York state. It's a perfect storm of supply and demand.

New York boasts more cideries than other state in the country. From 2011 - 2015, according to data released by the organizers of Cider Week NYC (the Sixth Annual festival runs October 21-31), the number of producers jumped from five to 65, with production volume up 750%. And so, a beverage once relegated to those seeking sweet and carbonated drinks is now more seriously considered.

"What we're really seeing is people interested in the fine quality, well-made product," said Dan Pucci, Cider Director at Wassail on the Lower East Side. "With an interesting style, [there is] a lot of growth happening."

Experience the booming cider business yourself at one of these NYC restaurants and bars who take the fizzy stuff very seriously: 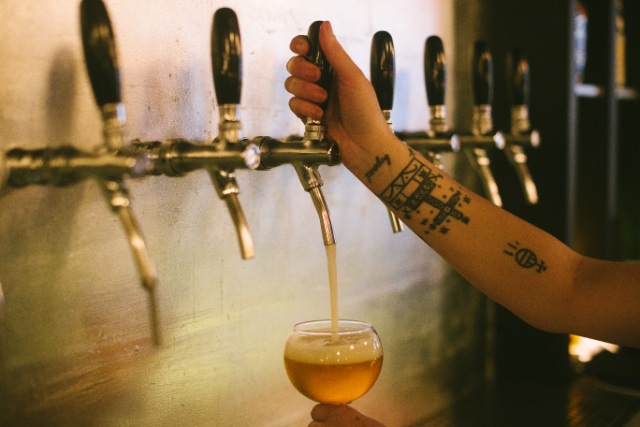 WASSAIL Wassail helped set the stage for where we are today in the world of hard cider in NYC. When it opened on the Lower East Side in spring 2015, Wassail billed itself as a "cider-focused restaurant." The idea was novel, to say the least, and diners and drinkers responded positively. Pairing cider with food is the focus of the establishment, though guests can also just drink cider at the bar.

"We saw a gap in the market," said Pucci. "People were curious about [cider]. They were asking for a place to go and enjoy it and we saw there was a need for it. In the past two years there's been a spike of interest."

Of the 16 or 17 varieties typically available, Wassail's cider offerings focus mostly on dry and complex styles (read: less sweet), though they will always have at least one sweet cider, too. 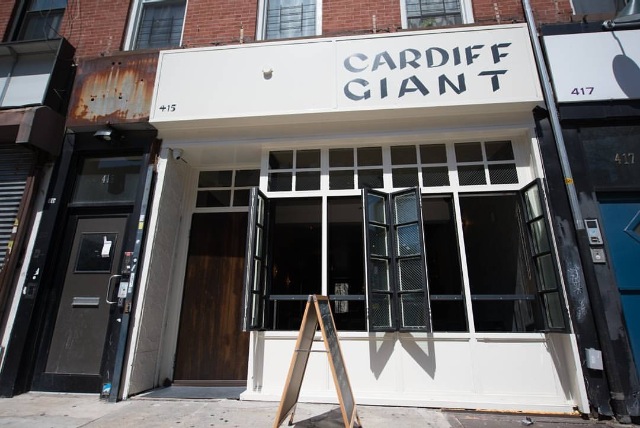 CARDIFF GIANT A recent addition to the drinking scene in NYC, Cardiff Giant opened in Clinton Hill in March. And get this: they stock spirits, wines, beers and ciders exclusively from New York State.

Steven Baird, also a managing partner at The Owl Farm in Park Slope, opened Cardiff to showcase "traditional" cider varieties that focus on "terroir and sustainable practices," he said. More than 20 different ciders are available at any one time with a handful on tap. 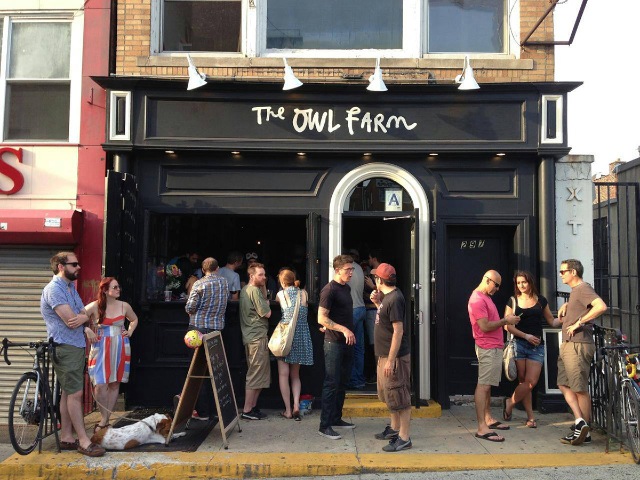 THE OWL FARM Unlike Cardiff Giant, this "beer and cider-centric bar" sources ciders from all over the country and world, featuring the diverse styles found in France, England and Spain. The lengthy menu includes ice cider (when frozen apples are pressed, the sugars are concentrated, resulting in a sweeter cider) from Eden Specialty Ciders in Vermont, a vintage cider from Heck's in Great Britain (since 1841) and a pear cider from Art & Science in Oregon.

They are also charmingly dog-friendly. 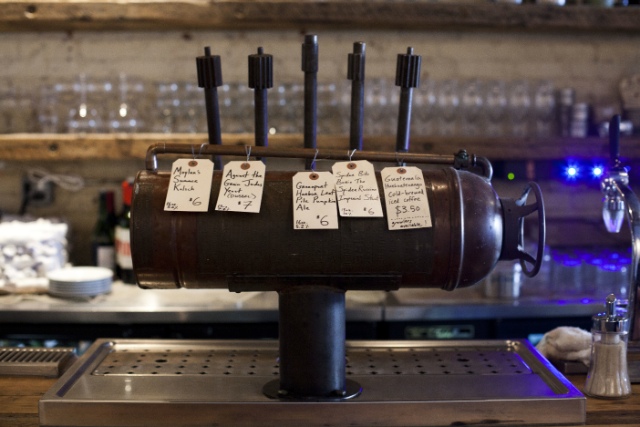 THE QUEENS KICKSHAW The sister restaurant to Wassail, The Queens Kickshaw opened in 2011. In addition to being a full-scale restaurant, the Kickshaw has a serious cider program that features a diverse range of beverages on tap and in bottles. Try glasses of the NYC-made (with Hudson County apples) Descendent Succession semi-dry, sparkling cider or the Citizen bRosé from Vermont, which adds blueberries to the apples and ferments them together for a juicy cider. The Kickshaw also stocks dessert ciders—sweeter ciders not suited for pairing with food.

Finally, the restaurant's list boasts an impressive number of large-scale bottles (750ml), which are great for cider aficionados who are comfortable committing to an entire bottle. 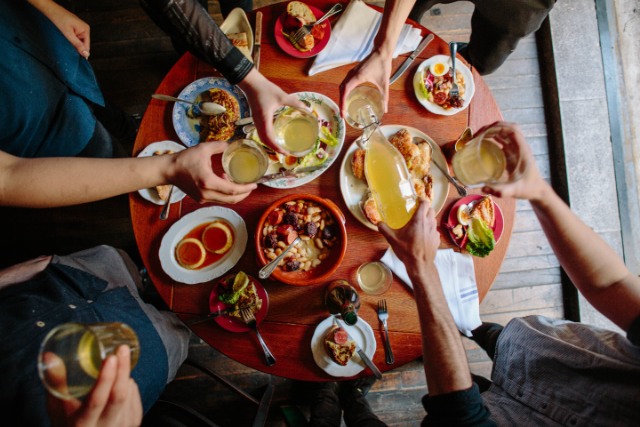 HUERTAS This Basque-style restaurant is devoted to the food and drink of northern Spain and you can bet that in addition to fortified wines like sherry and vermouth, cider is a major component of that.

"We focus on cider because it is entrenched in the drinking traditions of Northern Spain," said Nate Adler, an operating partner at Huertas. "It's not just about Spanish tradition, it's about the centuries old local traditions of drinking this fermented apple beverage and the fact that we think cider pairs best with our food."

The ciders at Huertas are mostly sharp or semi-dry and from Spain, though they also feature bottles from the well-known and loved upstate New York cidery Aaron Burr.

"We want to show New York City diners how complex and refined cider can really be," Adler said. 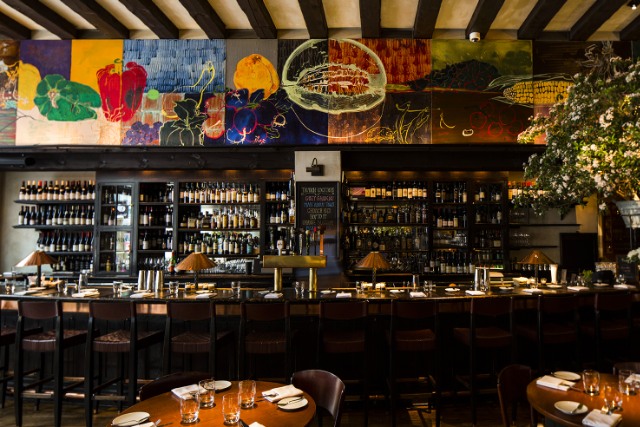 GRAMERCY TAVERN At this Danny Meyer mainstay (it's been open for more than two decades), both dry and off-dry ciders are featured on the menu. Most hail from the New England region, in keeping with the restaurant's longstanding farm-to-table ethos, but there are also options from France, Spain and Switzerland.

In his three-star review from August, New York Times food critic Pete Wells noted how seriously cider is taken at Gramercy: "How many other restaurants make cider or a glass of beer (on draft or from one of the vintage bottles) seem like a natural choice with a dinner that costs $100 or more?" 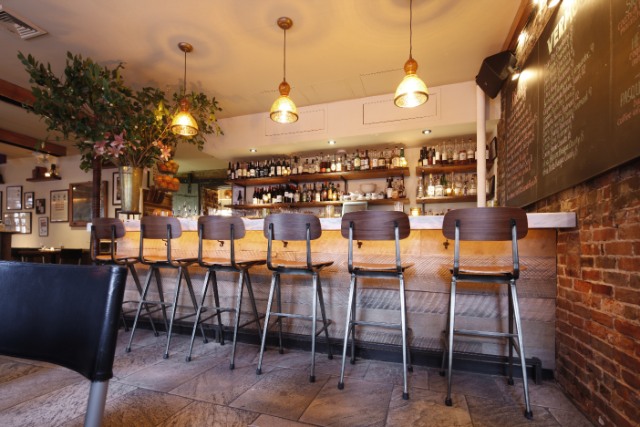 HEARTH Before Brodo and the bone broth craze, Chef Marco Canora was known for his homey, ingredient-driven cooking at the East Village restaurant Hearth. Even back when it opened in 2003, the menu featured French ciders. Fast forward 13 years and ciders from all over the world are now featured, but with a focus on New York state. The bar always has at least eight ciders to choose from, and in the fall the number increases.

"I bulk up our lists around this time. it's a pretty seasonal beverage," explained beverage director Josh Allen. "I think of New York and New England when I think of cider. That landscape resonates with that beverage."

The most popular cider at Hearth is Doc's Draft, an off-dry, sweeter-style cider than most ambitious producers and aficionados are promoting. "We always want to have something that's approachable for every cider drinker," said Allen. "[Doc's] is less funky and more in line of the general expectation of American cider."

But the more complex ciders are offered, too. "I have some ciders that have such high acid, ripping acid, that are amazing for food pairings, but not what people expect," he said, adding that some of the best are only available by the 750ml bottle. "I would encourage people to not be afraid to buy a bottle of cider the way they'd buy a bottle of wine," he said. "A lot of great ciders are only available in large format bottles." 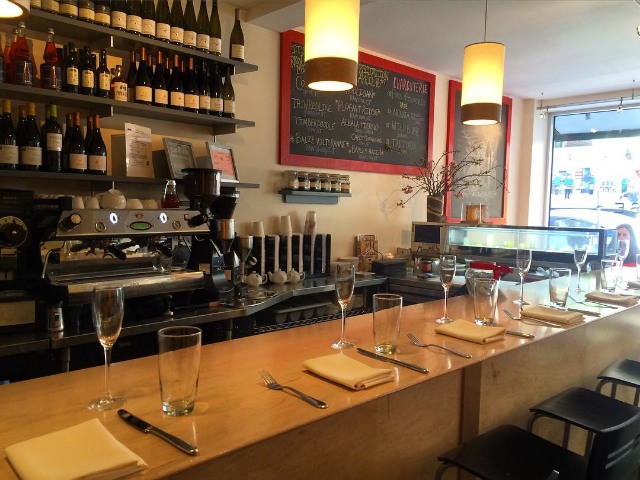 LUCY'S WHEY While primarily a cheese shop with two locations (Upper East Side and Chelsea, as well as a seasonal farm stand in East Hampton), Lucy's Whey also operates a restaurant at its UES location. The menu features both dry and off-dry ciders from New York and Vermont and the restaurant also hosts special cider diners where local producers pair ciders with dishes.

MURRAY'S CHEESE BAR Murray's Cheese has been a household name among cheese lovers since 1940. In 2012, the Cheese Bar opened, and since then, New Yorkers have been dining on cheeses and cheese adjacent foods while also being treated to a diverse selection of local ciders, too.

"We have a nice range from sweet ice cider...all the way to bone dry still cider," said Rachel Freier, beverage director at Murray's, adding that the ciders she chooses "pair wonderfully with cheeses."

The cider list includes a sparkling cider from Eden Specialty Ciders in Vermont, a limited-edition Aaron Burr cider called "Malus Baccata," made with wild crabapples, and a still and dry bottle from South Hill Cider in Ithaca. 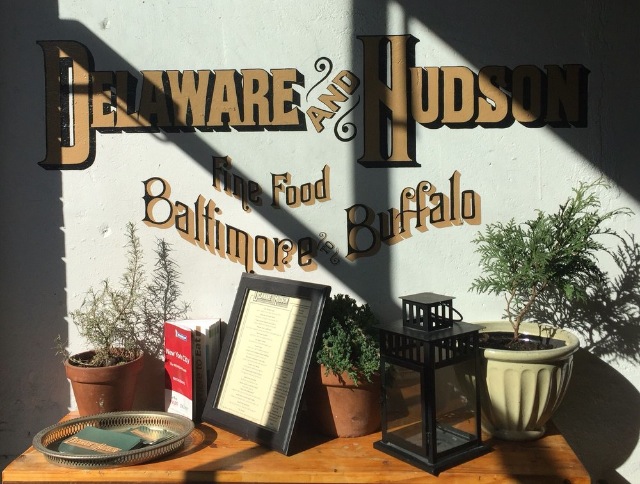 The same is true for the ciders on the menu. Of course, bottles from New York dominate, and there are a couple from Washington, but there is also a 750ml bottle made with honey and hops from MillStone Cellars in Monkton, Maryland. 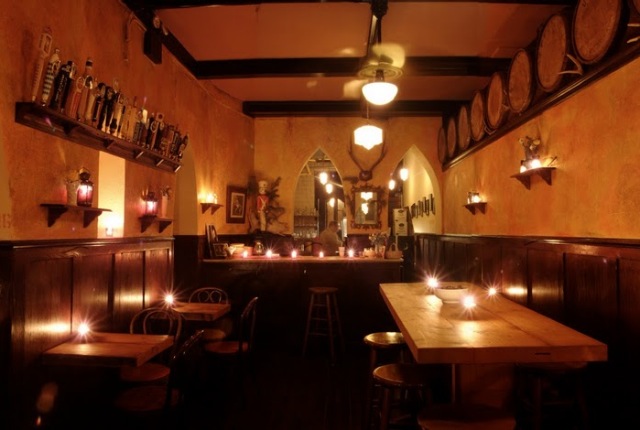 JIMMY'S NO. 43 Jimmy's has long been a destination for lovers of craft beverages, and the neighborhood bar and eatery is also beloved by those who work in the food industry. So it's no surprise Jimmy's is also down with the cider trend.

In fact, the first organizational meeting of what was to become NYC Cider Week took place in the back room at Jimmy's. "We opened our doors early to this movement," owner Jimmy Carbone said.

The menu includes dry and semi-dry ciders from New York, Vermont and New Hampshire, among other places. 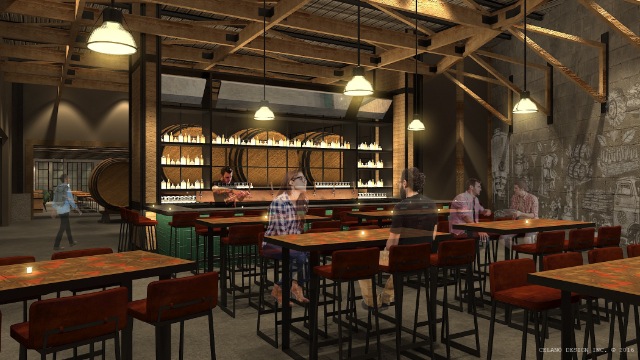 Coming soon: BROOKLYN CIDER HOUSE: Peter Yi was a wine buyer but became a cider producer because cider is "more food friendly than wine," he explained. And to prove, or at least attempt to prove, that rather bold statement, Yi is converting a warehouse in Bushwick into a temple devoted to cider. The Brooklyn Cider House is set to open in December.

"I always thought that there should be a place to showcase the cider, someplace to let people know how to drink the cider," he said. "Educating people is a very important part of the concept."

The goal of the cider house, Yi said, is to show people that cider should be evaluated on the same level as wine. The menu will include ciders from all over the world, and the food will be seasonal.

Yi's cidery in New Paltz, also called Brooklyn Cider House, makes cider that is "challenging" and meant to be paired with food.

"It's important for people to understand how it should be enjoyed," he said. "I truly believe that cider pairs better with food than any other alcoholic beverage. Once you're there and you're having it under the right light, with the right food, you'll see."

Georgia Kral covers (mostly) food and lifestyle topics and has been published in amNewYork, WNET's MetroFocus, WNYC, The New York Times and Brooklyn Based. She likes Chinese food, cats, straight-up cocktails and ankle boots paired with skinny jeans. Follow her on social @georgiakral.