Eggplant Parmigiana is a tricky dish. Mess up the balance of the three main ingredients just a little, or don't adjust the cooking time to the thickness of your slices, and you wind up with either an unpleasantly woody sandwich or, as one wag would have it, "a giant ball of soggy eggplant cheese." The failure rate was inordinately high during field testing for this one, but the following eleven eggplant dishes will definitely not let you down. 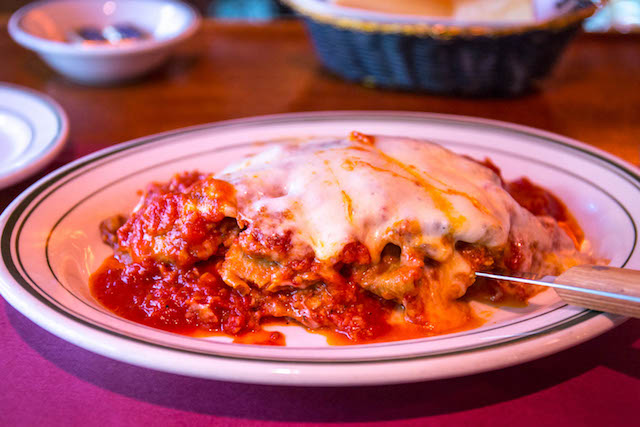 Bamonte's (Eggplant Parmigiana, $17.95) Sometime between 1900 (when they first opened) and last Saturday (when I sidled up to the bar for dinner), Bamonte's perfected Eggplant Parmigiana. Here the melanzane fruit is served tender but firm (you'll need that knife), the tomato sauce is bright and kicky, and the cheese gives a nice pull. It's positioned as a vegetable side dish on the menu but, as is often the case at this Williamsburg red-sauce icon, portion sizing is ample. Bonus: you're sitting in Bamonte's, a NYC time capsule if there ever was one. 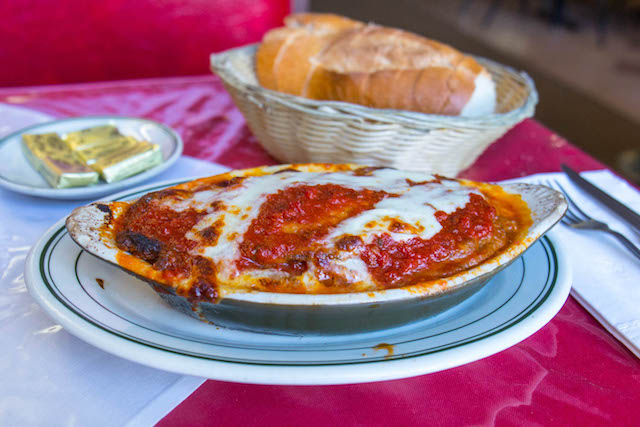 Sam's (Eggplant Parmigiana $11.25) This South Brooklyn old timer ("gruff but lovable" seems to fit most nights) opened its basement-level doors in 1930, and much of the decor from back then seems to still be in place. Which, of course, makes Sam's special, and, if you've never been, well worth a trip to Cobble Hill sometime soon. Because although I've never tried those steaks or chops touted on the restaurant's exterior, Sam's brick-oven pizza is decent and the baked dishes—specifically in this case, the Eggplant Parmigiana—are superb. 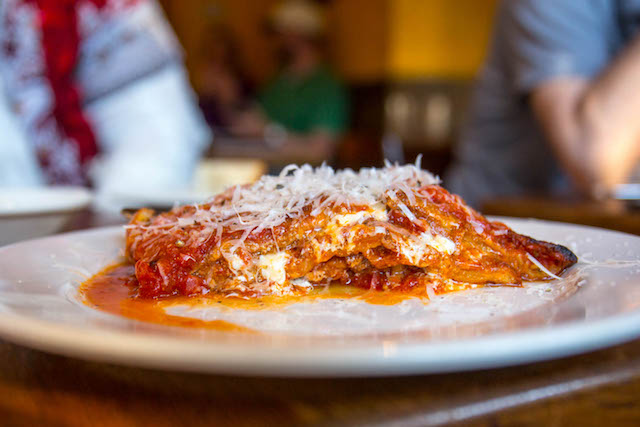 Bar Pitti (Melanzane alla Parmiagina $12.50) It's been a long (sometimes dramatic) ride for this West Village see-and-be-seen, sidewalk-seating spot, but more often than not Bar Pitti delivers where it counts the most, on the plates your charming young servers briskly whisk onto and away from your table. Always get the spinach "special" here, obviously, but the Melanzane is also a deservedly popular choice, especially when they make it nice and crisp. 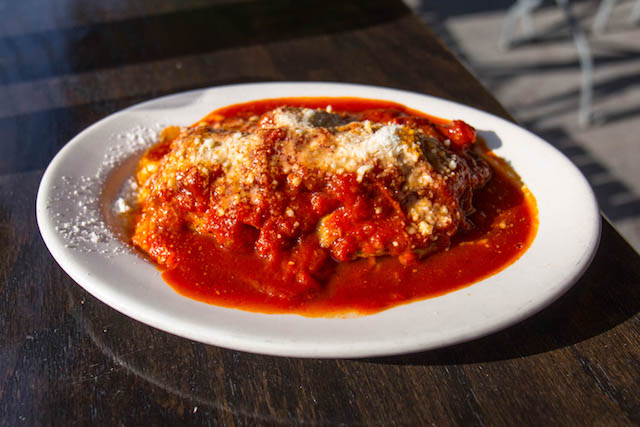 Frankies Sputino (Eggplant Marinara with Pecorino, $15) The cramped, wildly popular Frankies 457 in Carroll Gardens, and the spacious, more modestly popular Frankies 570 in the West Village, both have a ton of very good Italian food on their respective menus. And the Eggplant Marinara with Pecorino, served as a sandwich at lunch and a secondi at dinner, is no exception. At first glance, I admit, this thing looks oversauced, but tuck right into those thin-sliced layers of skillfully cooked eggplant, with that nice sharp pecorino bite, and you'll forget you ever doubted the kitchen. Plus, of course, you can always butter up some bread for dredging. 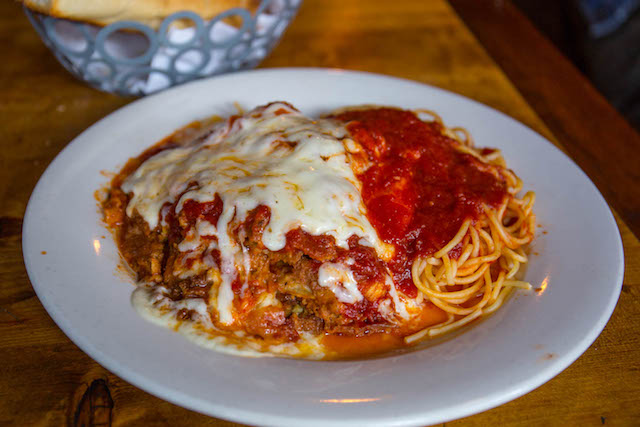 Vinny's, Eggplant Parmigiana with side of Spaghetti, $15. (Scott Lynch / Gothamist)

Vinny's (Eggplant Parmigiana with side of Spaghetti, $15) If you feel like eating just a ridiculous amount of decent red-sauce food for a reasonable amount of money, family spot Vinny's of Carroll Gardens is always a solid bet. Most everything's pre-made and sitting under heat lamps, cafeteria style, but a friendly waitress takes your order, the wooden booths and tables are wide and comfortable, and every dish is like getting two meals in one. They know what they're doing, too! This Eggplant Parmigiana with Spaghetti may look like a mess, but each component was prepared with care, and the eggplant itself remained firm and meaty under all that sauce and cheese. 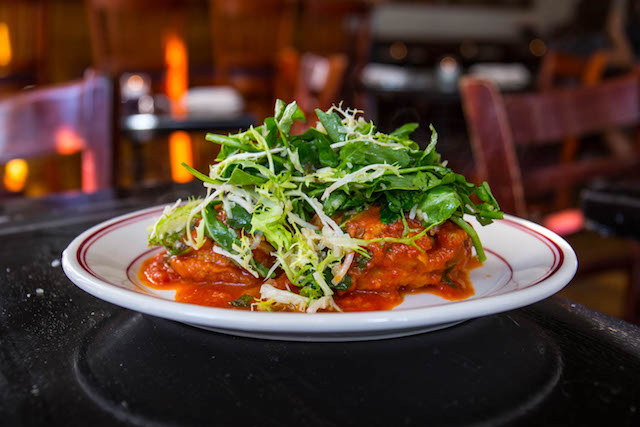 Little Owl (Eggplant Parmigiana, $16) Twelve years in, Joey Campanaro's quintessentially quaint West Village restaurant remains a tough ticket during prime time, but if you're willing to eat early, the evening summer sun streaming in through those big corner windows, a walk-in table can easily be yours. Signature dishes abound—the Pork Chop, the Meatball Sliders, anything that swims—but don't overlook the kitchen's elegant Eggplant Parmigiana, served just on the right side of rare and awash in a lovely sauce. The crisp greens are a nice touch, too. 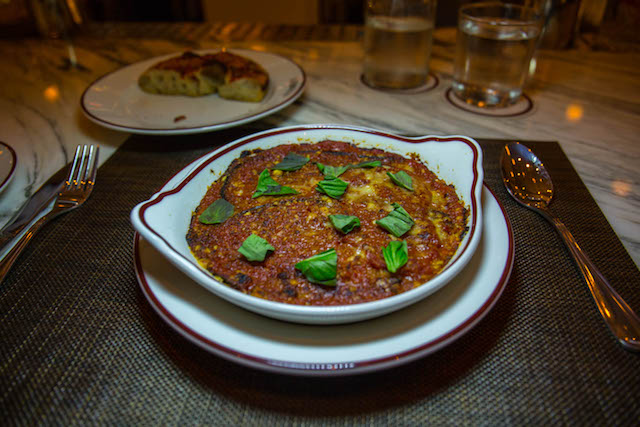 Leonelli Taberna (Eggplant Parmigiana, $14) Superstar chef Jonathan Benno (of Lincoln renown, among others) returned to NYC last month with this hotel-lobby restaurant in Nomad. Like most such beasts it's a bit dim in here, a tad fussy, a little expensive, but the side of Eggplant Parmigiana, made to order and served mouth-scorching hot, is a well-done, almost sophisticated take on the classic. And it comes with enough delicious, tomato-topped foccacio to make a meal. 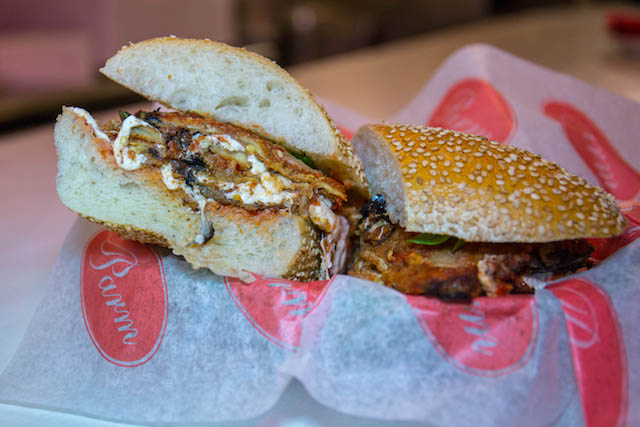 Parm (Eggplant Parm Hero, $12; Platter, $17) Parm is the only Major Food Group restaurant I can afford (other spots include The Grill, Sadelle's, and Carbone), and even there prices seem to keep creeping up at the mini-chain. But since these guys definitely know how to make great food, and serve up a first-rate, thin n' crispy Eggplant Parm Hero, the ingredient triumvirate balanced to perfection inside a soft sesame roll. If you want to loosen the pursestrings, skip the roll and get the platter. 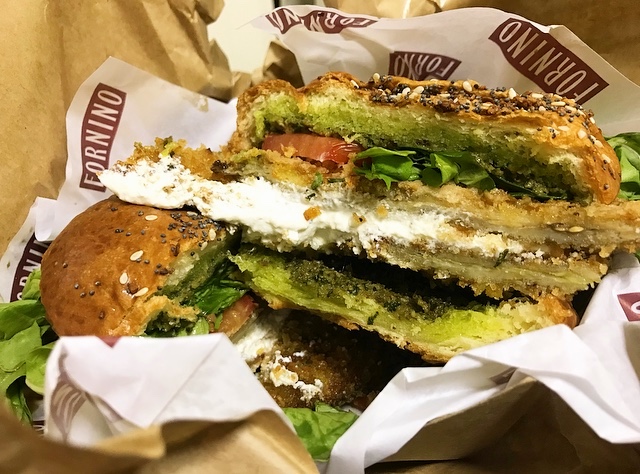 Fornino At Pier 6 (Grandma's Eggplant Sandwich, $8) The price is right and the eggplant is thin, crispy, and stacked on this sandwich. The eggplant cutlets are brought together with plum tomato slices, a fair amount of ricotta, parmesan, basil & pistachio pesto, arugula, and aged balsamic. And that is all served on a house baked “everything” brioche bun. If you don't want to sit with the restaurant crowd, get it to go and have a little picnic in the park. 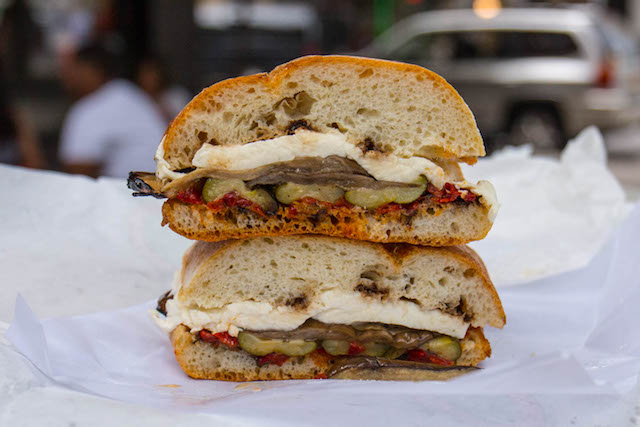 Casa Della Mozzarella (Il Vegetariano $8.50) The city's "real Little Italy," as anyone who's lived here for more than a minute will tell you, is up in the Bronx neighborhood of Belmont, a four-block-or-so area centered on Arthur Avenue and 187th Street. And while everyone has their favorites up here, it's hard to argue that the old-school deli Casa Della Mozzarella isn't one of the most glorious places on the planet. Which is why the Il Vegetariano, featuring soft-roasted eggplant and a slab of their beautiful mozz, is making this list, even though it's cheating a bit. There's no seating inside the Casa, so take your goodies to nearby Ciccarone Park for an al fresco feast. 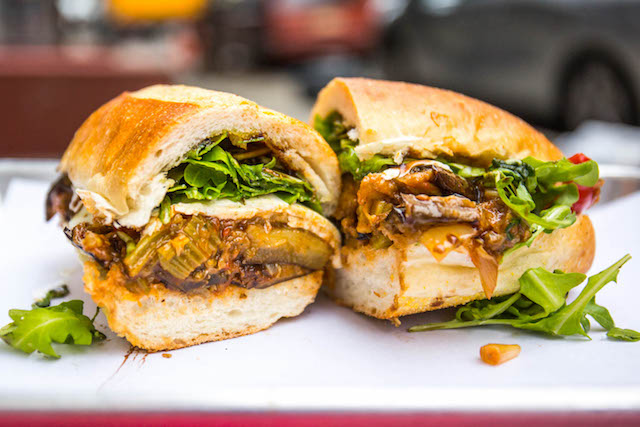 Regina's Grocery (Cousin Steven, $12) Ok I'm cheating again but Regina's on Orchard Street is a great, underappreciated sandwich shop, their "Cousin Stevie" does contain both eggplant (in caponta form) and fresh mozzarella, and I promise you it will satisfy any and all of your nightshade cravings. In addition to being an expertly-built sandwich made with quality ingredients, there are also a lot of them, because your chef hollows out the excellent stirato roll enough to really pile it on. The family-run Regina's also has a booth at Williamsburg's new food hall, the North 3rd Market.