The 11 Best Doughnut Shops In NYC

Is it a luxurious breakfast? A satisfying dessert? The perfect sweet snack with your afternoon coffee? Indeed, a doughnut is all these things (and more!) but though these pastries are easy to find in this beautiful city of ours, some yeasty/cakey treats are much, much better than others. For this list, I ate mountains of doughnuts over the course of a couple of months, revisiting perennial winners and seeking out random neighborhood gems. And although some long-time favorites were caught slipping, there are, thankfully, plenty of newcomers eager to take their place. And so, in no particular order, here are the 11 Best Doughnut Shops In NYC, rated as such for consistent deliciousness across flavors and styles. 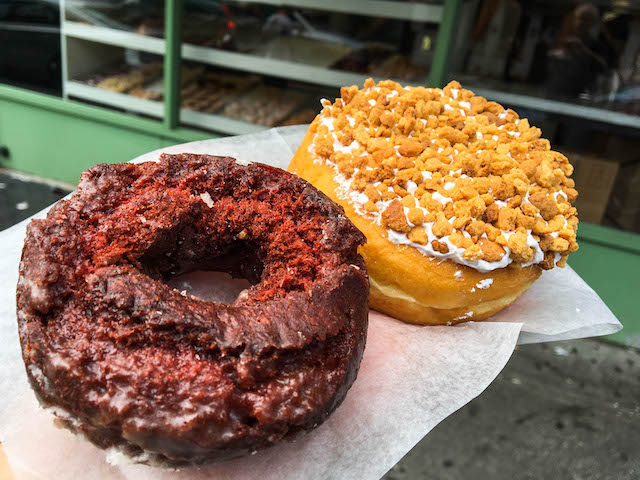 PETER PAN DONUT AND PASTRY SHOP: It's been about 65 years since the Peter Pan began hawking its remarkable donuts on Manhattan Avenue (and half a dozen since Tina Fey articulated what generations of pastry lovers had been thinking), and the wonderfully old-school Greenpoint shop shows no signs of slowing down. The doughnut choices ($1.10 to $1.55 each) are vast, and everything's delicious, from classics like Honey Dip and the Old Fashioned Cruller to the more newfangled S'mores and Tahitian Cream drizzled with chocolate. It's places like Peter Pan that ensure I will never leave New York.

Peter Pan is located at 727 Manhattan Avenue between Meserole and Norman Avenues in Greenpoint, Brooklyn (718-389-3676; peterpandonuts.com). 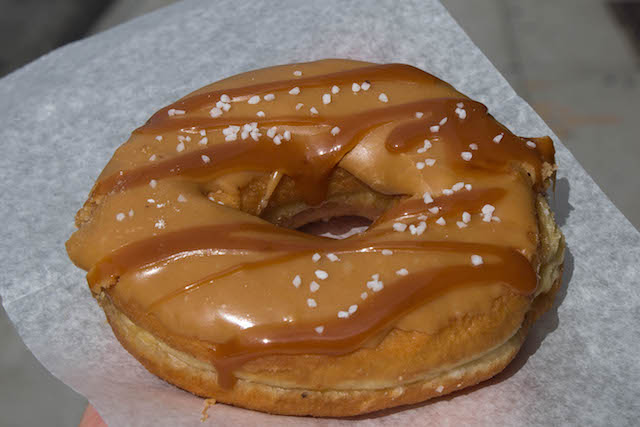 MOE'S DOUGHS DONUT SHOP: It seems unfair that a five-block radius in Greenpoint is home to TWO of the best doughnut shops on the planet, but here we are. Moe's Doughs, of course, is run by a former Peter Pan baker. The quality here is just as good as the original, and maybe sometimes even a tiny bit better. Moe's, which prices its doughnuts at $1.10 to $1.50 each, is not afraid of going gimmicky (there's a Rainbow Cake doughnut, and a Samoa-cookie one), and the candy-colored Strawberry is a bit alarming (though delicious). But the flavors are big, the pastry soft and fresh, and the love evident in each bite.

Moe's Doughs is located at 126 Nassau Avenue between Eckford Street and McGuinness Boulevard in Greenpoint, Brooklyn (718-349-1216; Moe's on Facebook). 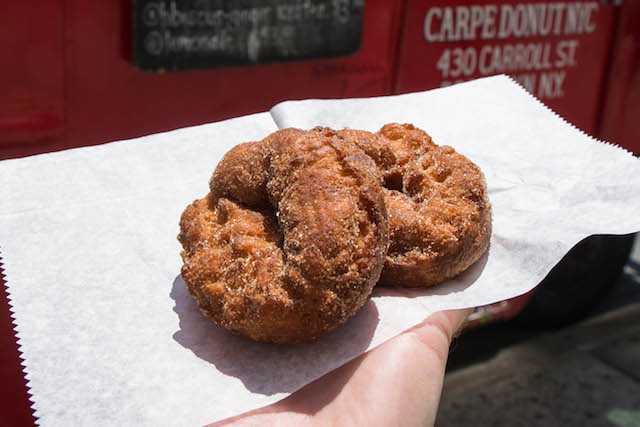 CARPE DONUT: Every coffee cart in town will sell you a breakfast belly bomb, but don't you dare lump the Carpe Donut truck in with those guys. These $2.25 chewy, craggy marvels are as simple as can be—there's only one flavor available, and it's Organic Apple Cider—but the taste and texture is a revelation. I've eaten three in one sitting and enjoyed the last bite as much the first. If this truck is parked anywhere near you on any given day, you owe it to yourself to indulge. 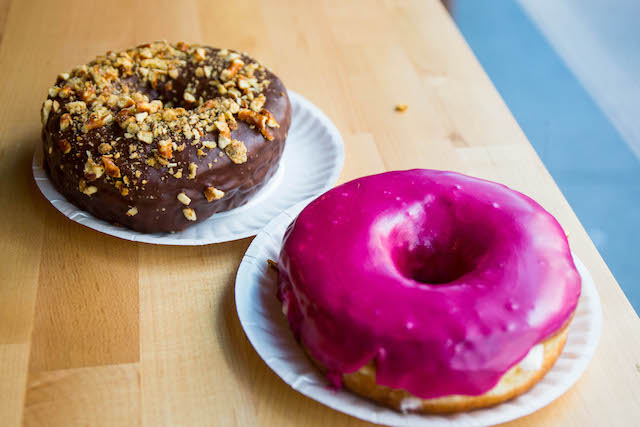 THE DOUGHNUT PROJECT: Though this West Village shop has only been open just shy of a year now, the Doughnut Project has quickly become a leading creative force in the breakfast pastry world. Chef Troy Neal totally pulls off such innovative sweet-and-savory creations as Bone Marrow Chocolate, Pineapple Habanero, and, Gothamist favorite, the Everything Doughnut. The doughnuts run $3.75 to $4.50 each, and less crazy flavors are available as well (the menu changes often), plus the comfortable, low-key vibe of the place, located on a quiet stretch of Morton Street, encourages frequent visits.

The Doughnut Project is located at 10 Morton Street between 7th Avenue South and Bleecker Street in the West Village, with a new outpost in the Gansevoort Market at 353 West 14th (212-691-5000; thedoughnutproject.com). 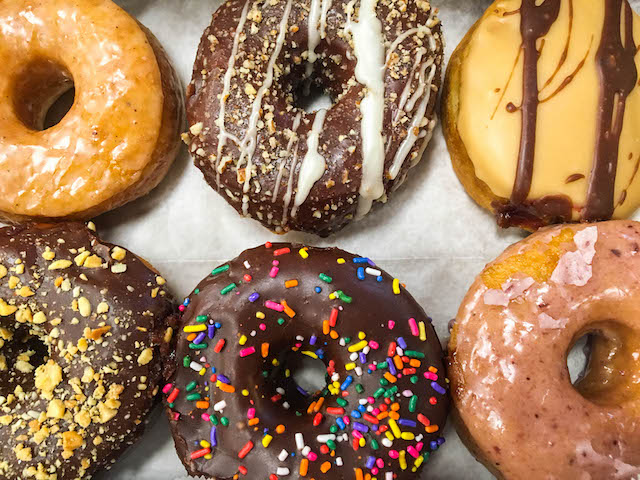 DUN-WELL: If somewhere in the back of your mind you still have any doubt that vegan doughnuts can be as good or, in the case of Dun-Well, much better than your basic animal-product pastry, let this Bushwick shop put it to rest once and for all. Just ignore the oddly surly staffers and dive right in. The $2.50 to $2.75 selection changes all the the time, but my go-tos include anything in the Peanut Butter and Jelly, Chocolate Pretzel Peanut Butter, Maple Glazed, Salted Caramel Glazed family, though the fruity ones are equally good. And thank you for saving the planet by eating vegan.

Dun-Well is located at 222 Montrose Avenue between Bushwick Avenue and Humboldt Street in East Williamsburg, Brooklyn; there's also a newer shop at 102 St. Marks Place in the East Village (917-555-1212; dunwelldoughnuts.com). 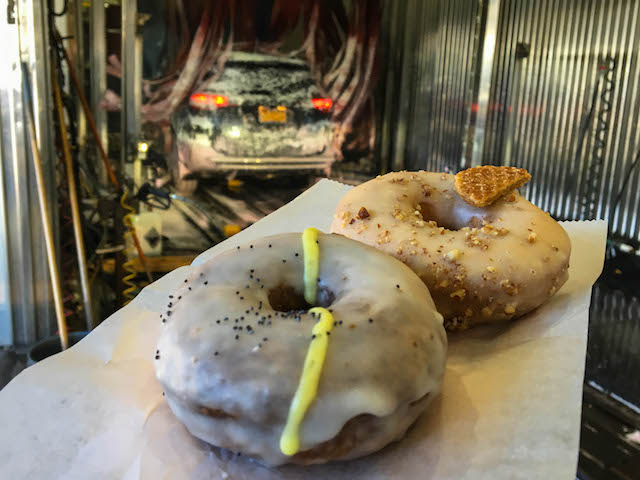 UNDERWEST: At first it seemed weird when Underwest opened, in 2014, inside a busy car wash along the West Side Highway. But chef Scott Levine quickly proved he was serious about the doughnut life by churning out some of the best cake-y pastries, running about $2 to $3 each, in town. The menu's short, but everything's amazing, with moist cake and a glaze that's thick, sweet, and intense—Maple Waffle and the new Lemon Poppyseed are particularly hard to resist. And though you can now get Levine's creations in coffee shops like Everyman Espresso, a trip to the mothership is still really the way to go. 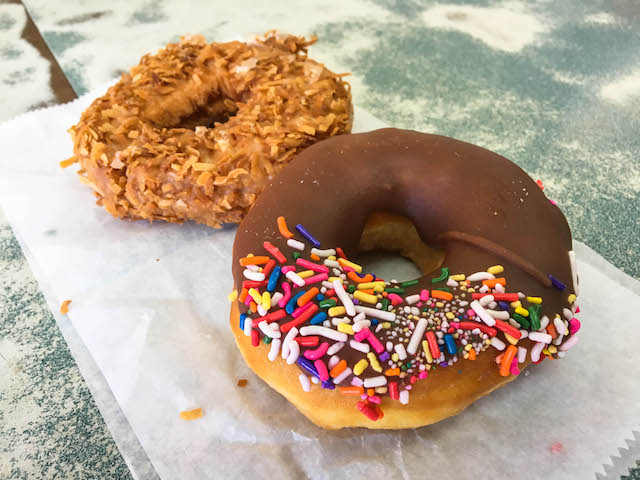 NOSTRAND DONUT SHOP: If only all old-school, breakfast-counter, neighborhood doughnut shops were as good as this one. Located on a bustling corner in Flatbush, Nostrand Donuts serves a solid array of first-rate treats, all of which are dense, sugary, satisfying as hell, and only $1. Toasted Coconut, Chocolate Marble (heavily glazed), and Chocolate Frosted are my favorites, but get a mixed dozen, bring them home, be a hero. 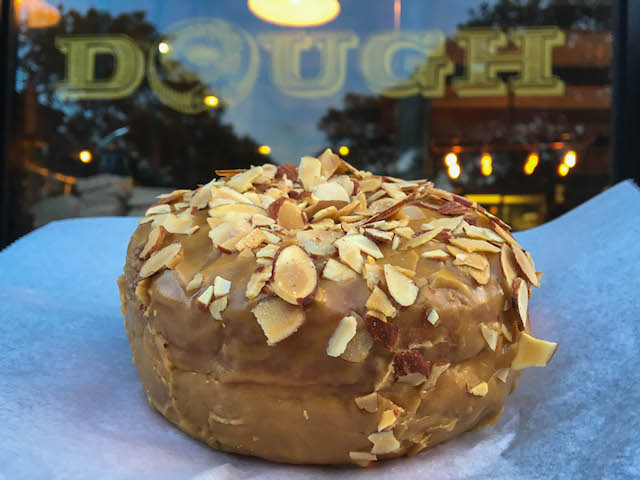 DOUGH: Dough is in danger of feeling played out—you can't swing a stick in this town without hitting one of Fany Gerson's pop-up doughnut booths, usually with a long-ass line attached—but fortunately for us, Gerson's is not one to rest on her Hibiscus-pink laurels. A recent visit to the Bed-Stuy original confirmed that Dough, whose offerings run $2.75 to $3.25 each, is still at the top its game, with both classic yeast and newer cake varieties coming out fresh and packed with flavor. We all have our favorites—I'm a Dulce de Leche with Almonds man... or a Salted Chocolate Caramel one—but you can really order with impunity here and walk away feeling good about life.

Dough is located at 448 Franklin Avenue at Lafayette Avenue in Bedford-Stuyvesant, Brooklyn, and at 14 West 19th Street between 5th and 6th Avenues in Flatiron (347-533-7544; doughdoughnuts.com). 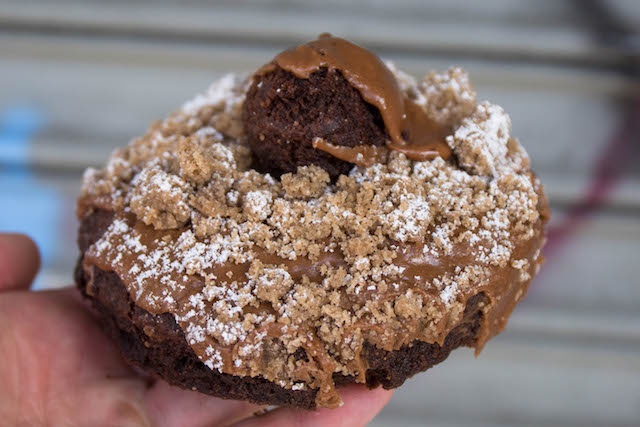 This eclectic diner in Astoria—"never use two ingredients when eight will do" seems to be menu motto—is a crazy popular neighborhood spot, especially for brunch, and especially on Sundays, when Montana D'Alessio Barbieri shows up with one or two of her outrageously sweet and delicious doughnuts. Like everything else here, Montana's $4.50 doughnuts lay it on thick; two recent creations were the crunchy-gooey Chocolate Nutella Crumb Cake and the borderline obscene Banana Chocolate Chip Peanut Butter and Jelly, rolled in Nilla Wafers. Each one counts as a full meal, but don't let that stop you from eating two. 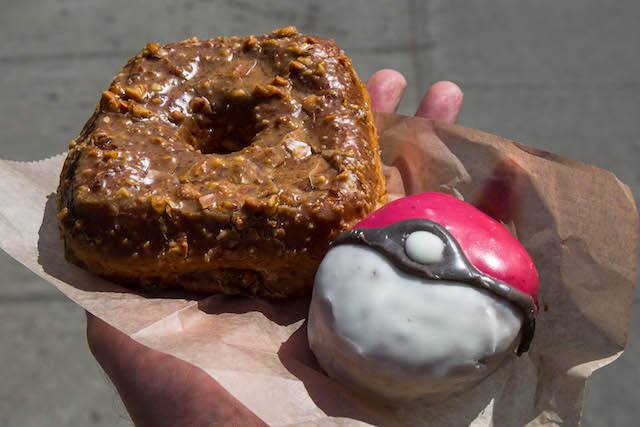 DOUGHNUT PLANT: This venerable Lower East Side institution (well, since 1994... but the basic recipe is from the 1930s, when chef/owner Mark Israel's grandfather ran a bakery in North Carolina) has seen a lot of success, with four shops across three boroughs and countless coffee shop clients. And that success is all earned—Israel's goodies, whether in the yeast, filled, or cake families, are highly creative, dessert-sweet, and still made with love after all these years. Personal favorites include Tres Leches, Peanut Butter and Jam, Creme Brulee, and any of the fun "holiday" ones, but the menu is long and well worth exploring in full.

Doughnut Plant has locations on the Lower East Side, in Chelsea, in Prospect Heights, Brooklyn, and in Long Island City, Queens. (929-373-4997; doughnutplant.com) 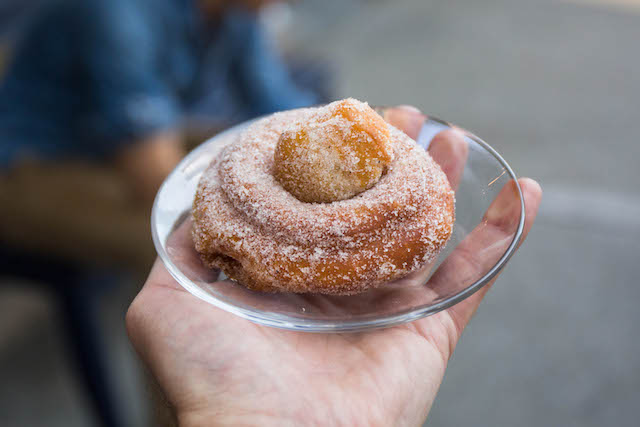 MAH-ZE-DAHR BAKERY: Umber Ahmad and Shelly Barbera's West Village bakery has been open for just a few weeks at this point, and in that time I've only been able to get my hands on their Brioche Donut twice (they sell out quickly). But it's enough to know that these are truly extraordinary doughnuts, perhaps even the very best single doughnut in the city. The dough is both fluffy and dense without being too bread-y, it's generously filled with a thick vanilla custard, and a layer of sugar crystals on top adds both sweetness and crunch. And, as you can see above, you get to eat the hole too. These will make you very happy.

Mah-Ze-Dahr is located at 28 Greenwich Avenue between Charles and 10th Streets in the West Village (212-498-9810; mahzedahrbakery.com).

#best donuts
#best of gothamist
#donuts
#original
Do you know the scoop? Comment below or Send us a Tip