The 10 Shuttered NYC Bars & Restaurants We'll Miss The Most

There's always going to be a lot of turnover in the city's bar and restaurant scene, but sometimes there are closures that really bring us down. This year, we lost a lot of good ones, from genre-defining restaurants to crusty dives. Below, the 10 bars and restaurants we'll miss the most. 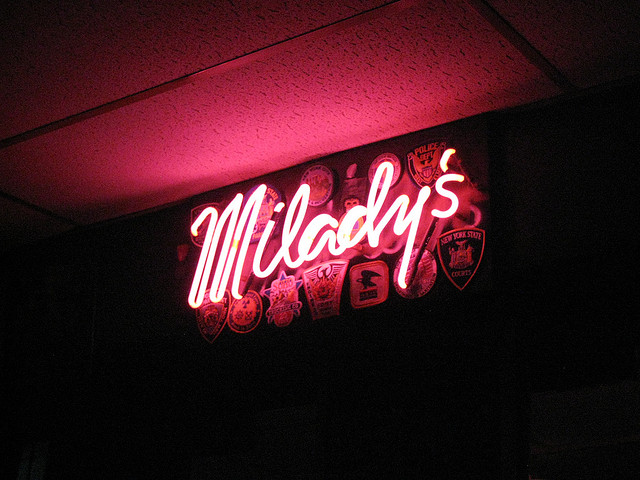 MILADY'S It was a very sad day when this SoHo oasis shuttered at the beginning of the year. In an area overrun with high-end clothiers and chain shops, it was always comforting to know you could pop into Milady's for an unpretentious pint of Budweiser or a few shots of rail whiskey. 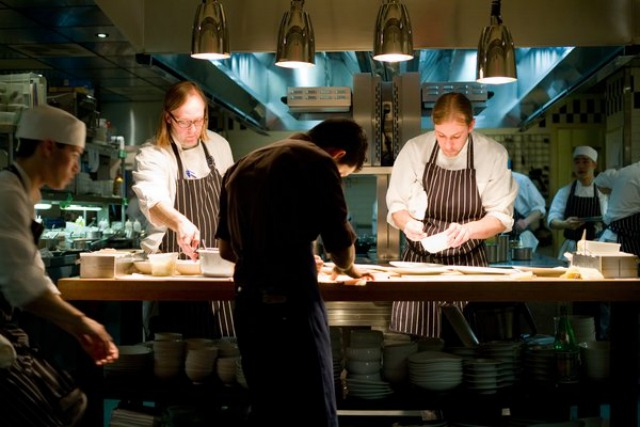 wd~50 Wylie Dufresne closed the doors to his revolutionary Clinton Street eatery after 11 years to (what else?) make room for condos. As much as we'll miss his temple to modernist cuisine, Dufresne's doing some pretty great a la carte dishes over at his newer spot Alder, so at least we have that. 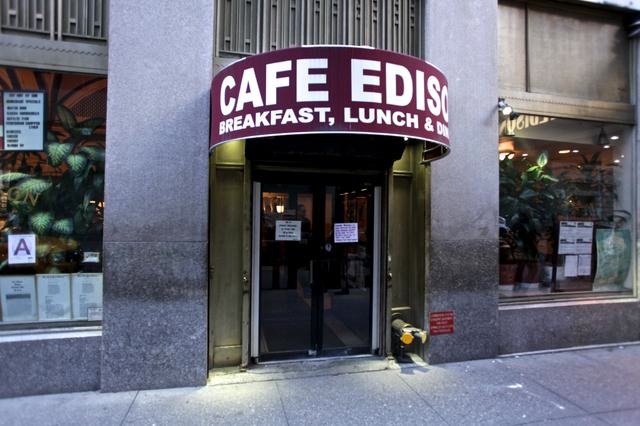 CAFE EDISON Despite an earnest campaign to save it, this beloved Broadway fixture closed just before Christmas. The landlord evicted the 34-year-old eatery, which hopes to find another home for its matzoh balls sometime in the future. 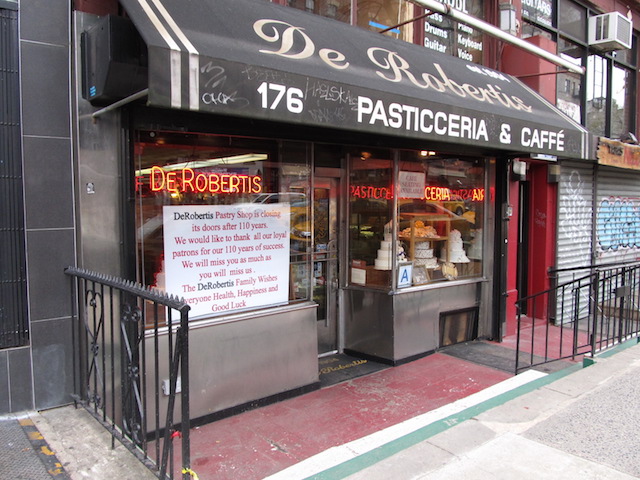 DEROBERTIS The city's old school bakery contingent lost one of its finest when this East Village shop shuttered in early December. The pasticceria—which was run by the DeRobertis family since 1904—was beloved for its delicious cannoli and cookies as much as its welcoming and cozy environment. They just don't make 'em like they used to. 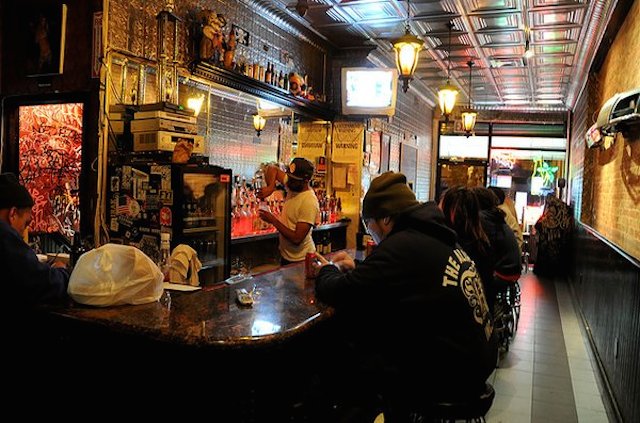 WRECK ROOM Bushwick's "trendy neighborhood" status pushed out this nine-year-old dive with a good old fashioned rent increase. Sure, there are billions of bars in the 'hood these days, but none that "hawked Miller High Life for nothing and sold delicious rice balls just feet from a restroom that smelled like the inside of a week-old diaper." Well said, Ms. Fishbein. 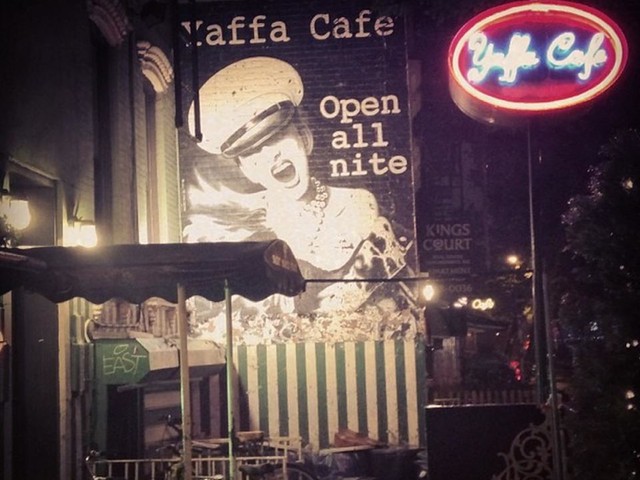 YAFFA CAFE Even if you hadn't visited since college, there was something comforting in knowing this funky East Village hangout was "open all nite" should you ever need it. The cafe bid farewell in October, ending its nearly 32 year run as a late-night destination spot for pancakes and a time warp back to the '80s. 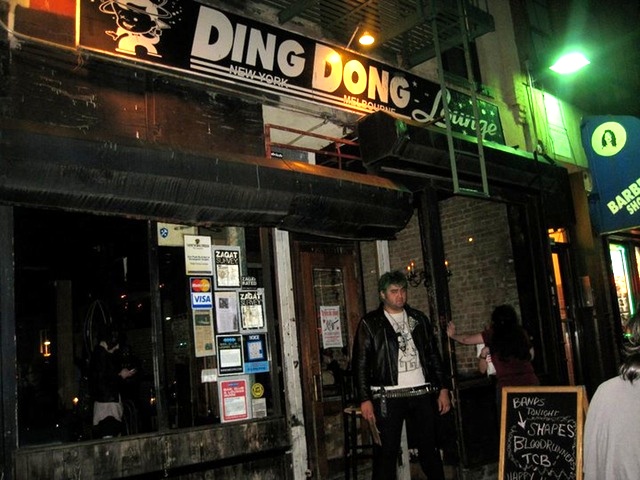 DING DONG LOUNGE This delightfully decrepit UWS bar fell victim to "landlord greed, avarice, and douchebaggery" earlier this year, leaving a big hole in the neighborhood's—and the city's—dive bar scene. We're still looking for a replacement for those late-night benders. 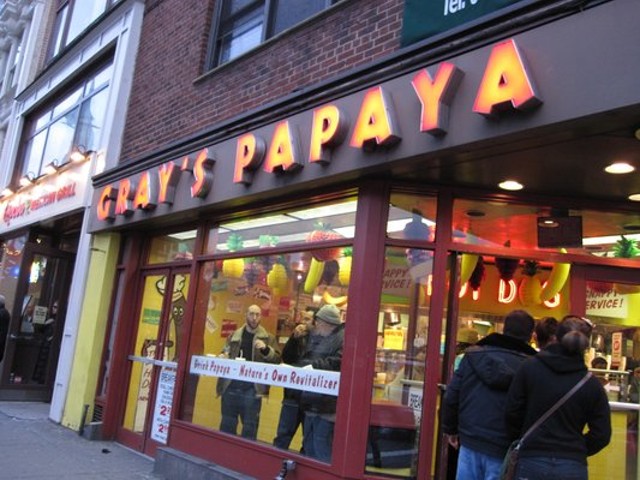 GRAY'S PAPAYA It's pretty ironic that this tube of NYC history made way for a juice bar when it closed its shop in Greenwich Village—it'd take a lot of Recession Specials to survive a $20,000 rent hike, too. There's now only one Gray's left in all of New York City. 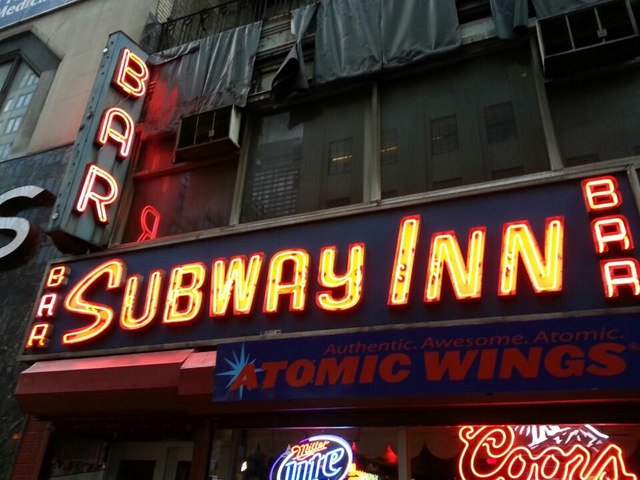 SUBWAY INN Yes, we know it's relocating nearby, but we also know it's never going to be as good as the original creaky dive that leered at Bloomingdale's across 60th Street. All the uproar surrounding its announced closure and multiple stays of eviction give every indication that this treasured spot should have a lovely reincarnation but we're still pouring one out for the OG locale with its pee-soaked bathrooms and ripped up seat cushions. 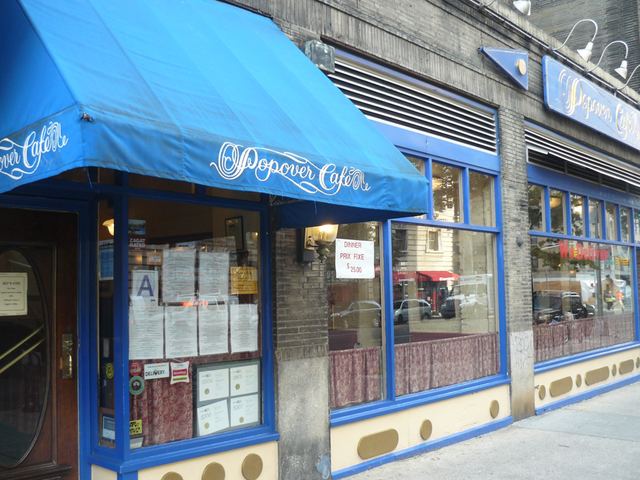 POPOVER CAFE Opened as a tiny eight-table, no-oven operation in 1981 by founder Carol Baer, this UWS restaurant closed in January after 32 years in the neighborhood. Though it was mostly for neighborhood folk looking for a simple meal made with care, the cafe was a holdout in the increasing chain invasion currently unfolding in the neighborhood. And for that, we loved it.

#RIP
#original
Do you know the scoop? Comment below or Send us a Tip