From the pricey Candle 79 to the fast-casual of Blossom Du Jour, New York City has a fine spectrum of vegan restaurants. We don’t want to imagine a world without Champs’ buffalo tempeh wings or MOB’s cashew macaroni and cheese, but some of the best vegan dishes you will find around town are being served at omnivorous restaurants. Rather than condescend to plant-eaters, they offer complex and unexpected flavors that often surpass what the strictly vegan spots are serving. Here are the best restaurants for vegans and the non-vegans who love them. 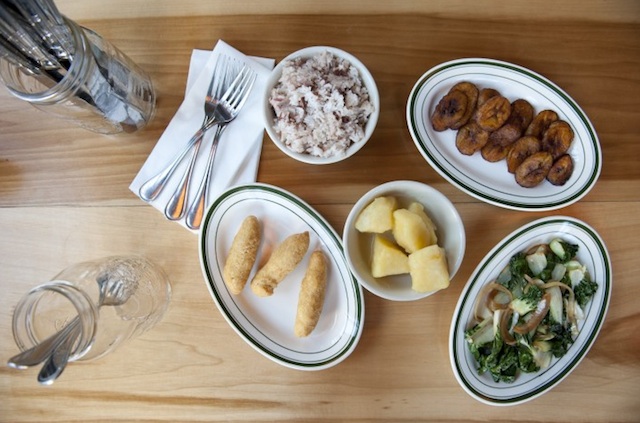 GLADY'S: Glady’s hints toward its vegan-friendliness with jerk seitan listed among their meats, but their Caribbean-inspired menu turns out to be a revelation. Aside from the chicken wings, none of the six other side dishes contain any animal products—even the Jamaican hush puppy-type fritters known as festivals are made with coconut milk. Fried plantains, spicy slaw, succulent bok choy, and rice and peas make for perfect family-style eating, and the extensive rum list warms everyone up. To finish the meal, they bring you a tiny scoop of housemade ice cream. It too is made with coconut milk, and has a rich molasses flavor. 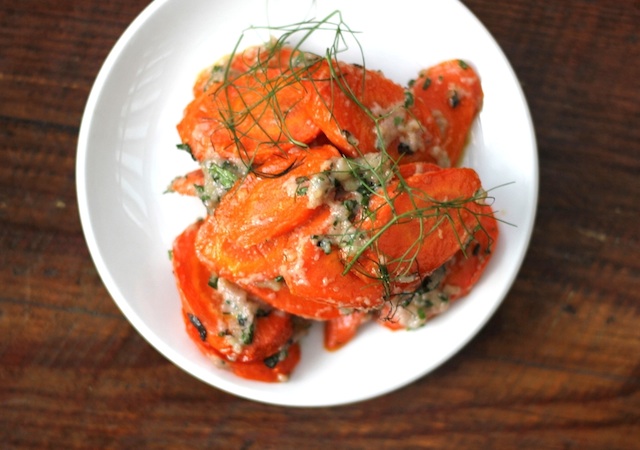 DEAR BUSHWICK: Chef Jessica Wilson follows the seasons closely, so Dear Bushwick's menu changes often. There are always vegan dishes on offer, though, and they’re always made with precision. Fried potato peels with sea salt and vinegar are a take on fries that nods to the restaurant’s English pub influence; the seasonal vegetable soup is always vegan and gluten-free; and roasted carrots in a “medieval nut pesto” are a hearty spin on a ubiquitous ingredient. Last spring, a king oyster mushroom dish with mashed turnips was stunning and meaty—here’s hoping it comes back. 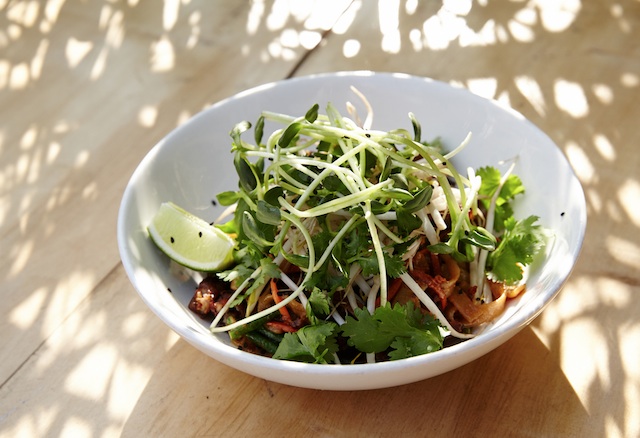 SELAMAT PAGI: Tempeh is an Indonesian protein developed out of necessity by a people who couldn’t afford meat; but even carnivores can appreciate its meaty texture and fermented funk. Selamat Pagi, owned by the folks behind Van Leeuwen Ice Cream, is an Indonesian spot that cooks up locally made tempeh in their Mie Goreng Tempeh dish. Go for a clean and classic take on the protein used in the cuisine in which it was intended. 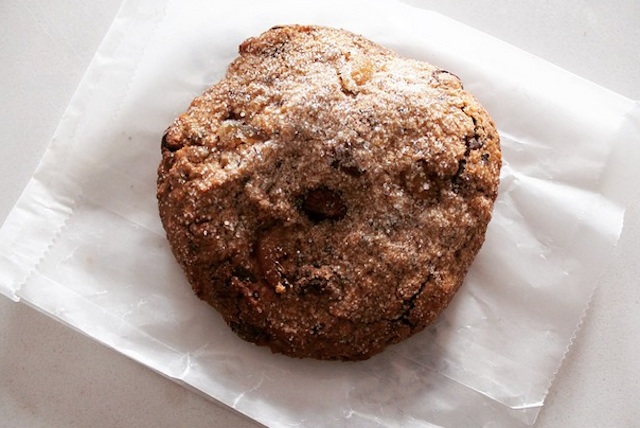 SCRATCHBREAD: Between the veg flat bread, with perfectly tender seasonal vegetables, raw kale, hummus, and a smoked romesco, and the vegan and gluten-free baked goods, Scratchbread is one of the best quick, cheap, and unpretentious breakfast and lunch options around. They make their ginger-glazed hazelnut chocolate chip oat cookie with rice flour, and some sort of magic to get a moist texture that many bakeries fail to match. 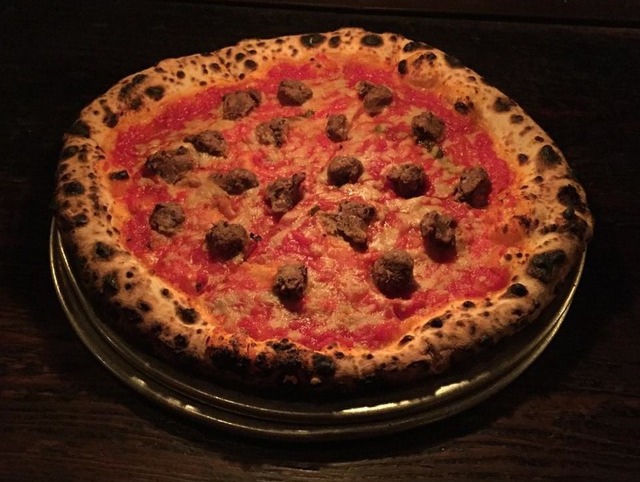 PAULIE GEE'S: Vegan pizza is easy enough to find, you just have to be content to eat bread covered in sauce and whatever canned vegetables are on offer. At Greenpoint’s neapolitan pizzeria, they make their own cashew ricotta, jackfruit meatballs, and vegan fennel sausage, so you’re not even suffering through fake Daiya or Tofurkey sausage. The Jackie Green looks so much like a non-vegan pie that you might be tempted to send it back, but it’s just their almond milk and onion cream which are as gooey as cow’s-milk cheese. 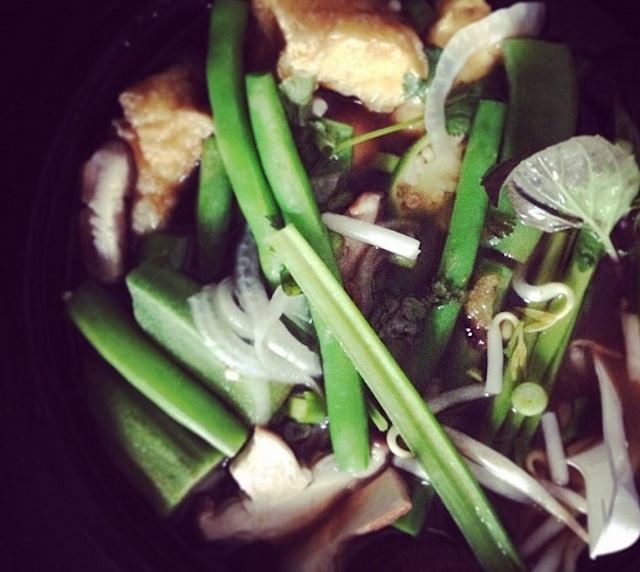 Peering inside some pho (via)

FALANSAI: For lunch in Bushwick, Falansai’s Vietnamese street food menu is unbeatable. The bánh mì has olive pâté, along with fermented mustard greens, green papaya, cucumber, carrot, and daikon, while the pho with snap peas, mushrooms, tofu, and okra hits you with flavorful crunch, meatiness, and heat — a cure-all more substantial than a lot of available veggie ramen. 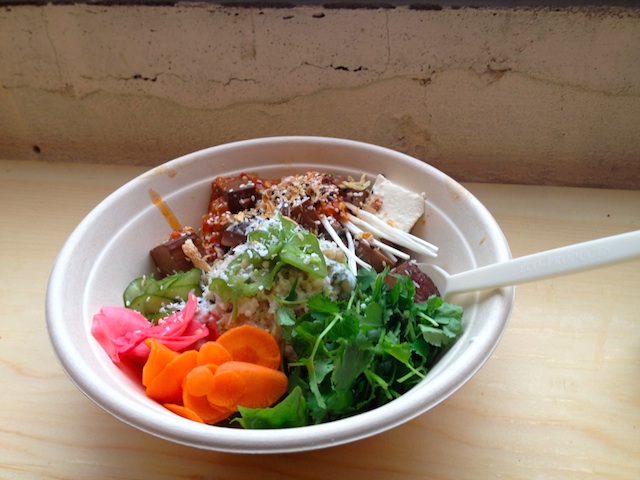 ADOBO SHACK: Lumpia Shack's Smogasburg Adobo Shack serves Filipino adobo bowls of rice, tofu, and mushrooms in a few different styles. The best is the Bicol Express, made with Brooklyn-made Anita's Yogurt—the only coconut-based creamline yogurt. It's spicy, creamy, and tangy, and the tofu and mushrooms are meaty bursts of umami.

Adobo Shack can be found at Smorgasburg on Saturdays and Sundays; check their website for details. 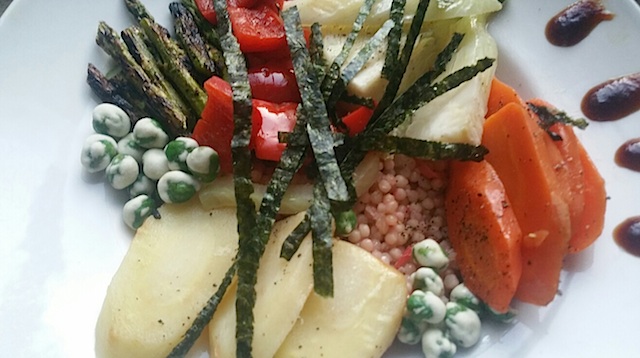 DO OR DINE:  The BBQ Chimichanga stuffed with smoked jackfruit, tofu, kale, and cannellini beans at this fine-dining spot that masquerades as a casual neighborhood joint is immensely satisfying. Alas, it just rotated off the menu. Instead try the Couscous Chirashi with wasabi peas and nutmeg soy gel. The couscous is given a sushi rice treatment with rice vinegar and sugar and cooked with beni shoga to give it a ginger flavor and tint it pink. It's topped with carrot slivers and parsnip, spears of asparagus, and chunks of red bell pepper. Nori strips give the dish a whiff of the sea while a nutmeg-infused soy gel and wasabi peas serve as condiments to the veggies. Mix it all up like bibimbap. 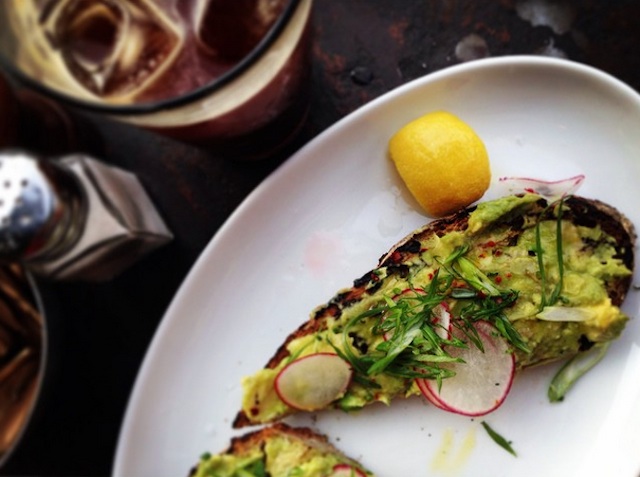 FIVE LEAVES:  This Instagram-friendly spot on a corner in Greenpoint makes a striking and delicious avocado toast from grilled whole-grain bread, garnished with the perfect amount of crunchy radish and green onion. Lemon wedges are there to add the necessary acidity. Also available is a gorgeous spiced chia pudding, served with cardamom poached pear, goji berry, sprouted seeds, and nuts. These dishes are vegan clichés by now, but Five Leaves makes them so well you won't care. 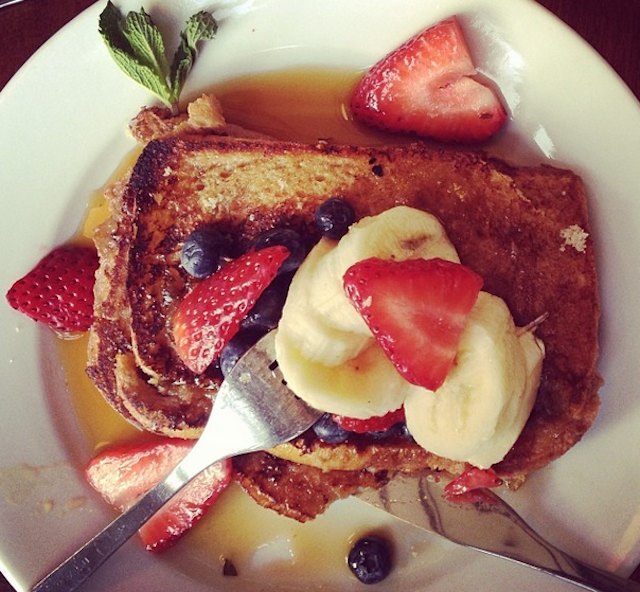 THE ROOKERY: Brunch can be hard on vegans (see: bacon). At The Rookery, it’s easy. They have banana-battered French toast that hits all the Proustian childhood buttons, or you can go for the veggie sammy with avocado instead of eggs for a more savory note. Somehow there’s rarely a wait here, and every non-vegan I bring falls hard for it. If you end up here late at night, you can also try Duncan’s Burgers—the veggie is vegan if you get it wrapped in lettuce, and it’s served with super-crisp waffle-cut chips.

Alicia Kennedy is a food writer, editor at nymag.com, and DJ.

#best of gothamist
#brooklyn
#dear bushwick
#do or dine
#FALANSAI
#five leaves
#glady's
#orleans
#scratchbread
#SELAMAT PAGI
#the rookery
#vegan
#veggie
#original
Do you know the scoop? Comment below or Send us a Tip