The 10 Best Sushi Spots In NYC

Sushi is the kind of cuisine that can straddle the highbrow/lowbrow line. There's nothing quite like dining at an elegant sushi bar that takes pride in the freshness and quality of its luxury fish-and-rice creations, but sometimes a takeout Spicy Tuna roll can suffice just the same, so long as you don't contract some kind of violent parasitic roundworm post-dinner. Here are our favorite sushi joints in the city, broken down by category; as always, leave yours in the comments. 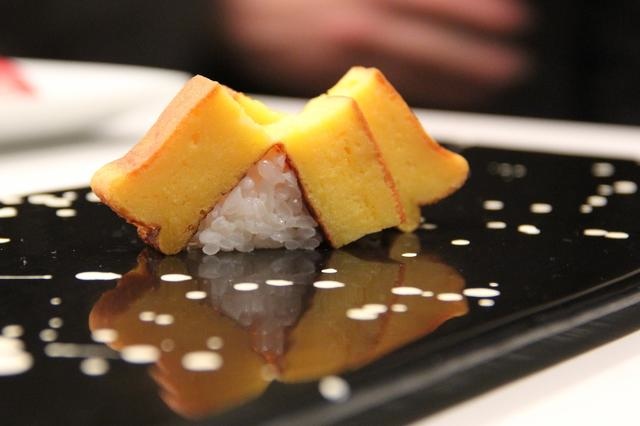 SUSHI NAKAZAWA: This West Village spot blew food critics and diners away when it opened last year, winning rave reviews and a rare four stars from NYT's Pete Wells. Chef and owner Daisuke Nakazawa, featured in the sushi-making 2011 documentary "Jiro Dreams of Sushi", creates exquisite omakase dishes boasting everything from cherry salmon to butterfish to fatty tuna, and each piece of sushi is carefully crafted, designed and impeccably fresh.

A 21-course (yes) meal at the 10-seat sushi bar costs $150-per-person, though you can opt for a slightly cheaper ($120) seat in the back dining room if you choose, and you can pair the meal with sake for an additional $40. Do note that a reservation here must be made 30 days in advance, and they fill up mere minutes after they're made available on OpenTable at midnight.

Sushi Nakazawa is located at 23 Commerce Street between 7th Ave South and Bedford Street in the West Village (212-924-2212, sushianakazawa.com). 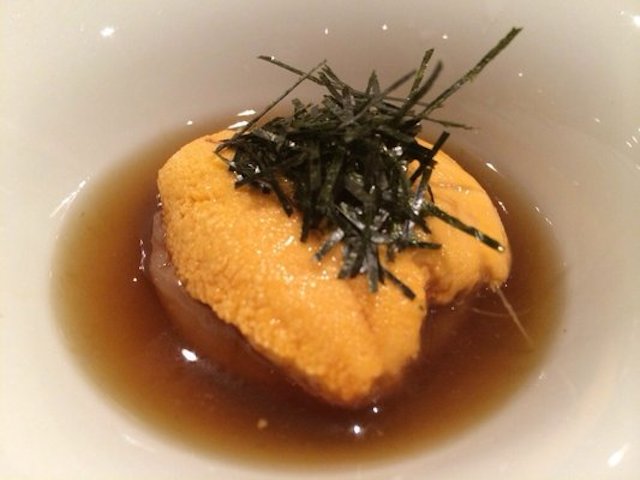 SOTO: If you've got a taste for sea urchin, this West Village spot is your jam. Chef and owner Sotohiro Kosugi's menu focuses on the Japanese delicacy, offering unique uni-centric dishes for prices that are not astronomically-priced, if not quite modest. Highlights include the Uni Murasaki sushi nigiri ($8), the sashimi-and-soy reduction Uni Cocktail-Murasaki ($15) and the decadent Uni Ika Sugomori Zukuri ($26), wrapped in thinly sliced squid with shiso, and served with quail egg and tosa soy reduction. Service can be slow, but the sushi is worth the two Michelin stars Soto's managed to rack up, so don't be too concerned if your dishes take some time to make it to your table. 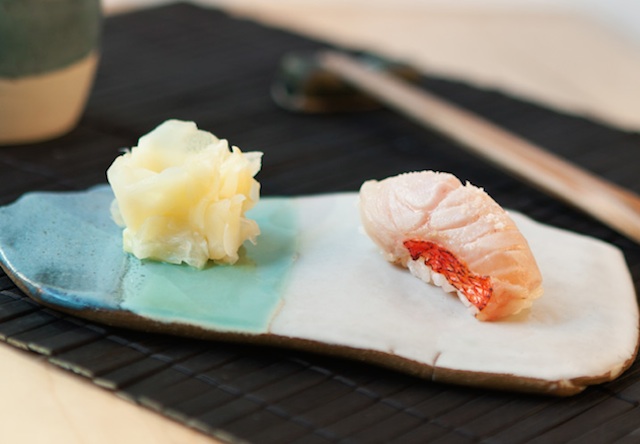 Fresh uni, pulsating scallops and toro caviar come sprinkled with mackerel, sandwiched between bacon and blowtorched, depending on Daley's mood. Pull up a seat at the 11-person sushi bar and dig in; if you're lucky, you might get a chance to hear a story or two from wild-child Daley while he masterfully slices up your dinner.

Sushi Ko is located at 91 Clinton Street between Rivington and Delancey Streets on the Lower East Side (917-734-5857, newyorksushiko.com). 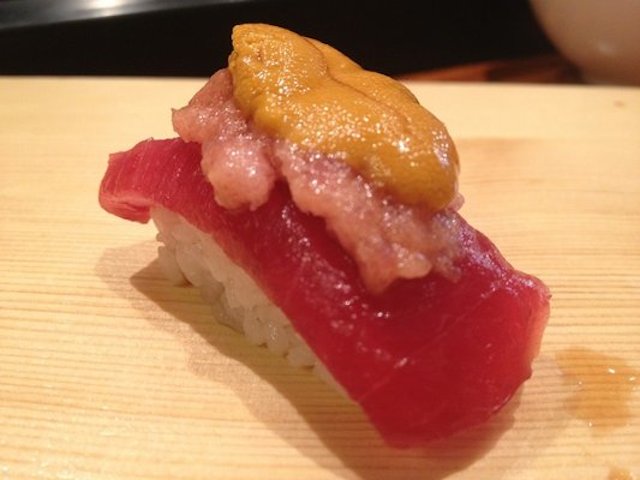 TANOSHI SUSHI SAKE BAR: UES sushi joint Tanoshi isn't much more than a hole-in-the-wall, boasting 10 to 12 seats in a tight, minimalist space. But the mind-blowing omakase meal served there is well worth the cramped quarters. The fresh fish, sushi and sashimi is more than on par with the city's higher-end offerings, and, considering the market price-based omakase menu can come to a mere $60-per-person, at least a third of the price.

Dishes of note include quail egg and uni sushi, marinated salmon roe, monkfish liver (dubbed "the foie gras of the sea" here) and seared king salmon sushi; and as a bonus, Tanoshi is BYOB, and ice buckets sit on your table for some leisurely DIY drinking.

Best Place To Bring The Gang 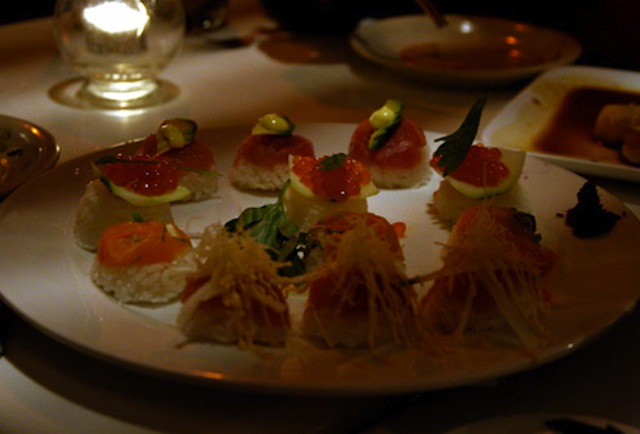 BOZU: Bring your friends to Bozu for the sushi bombs, and stay for the...sushi bombs. This Williamsburg joint might not be the swankiest place on this list, but it's definitely the most fun, serving funky Japanese "tapas," sushi and strong cocktails to an ever-lively clientele. The sushi bombs are the stars here: circular mounds of rice delicately topped with well-paired proteins and vegetables—the Spicy McBomb ($6), for instance, comes with tuna, cucumber, kaitafi and spicy mayo; the Pink Bomb ($4.50) is made with salmon and scallions and the McLow Bomb ($6) is comprised of tuna, avocado and wasabi cream.

You can also opt for the decadent Party Bomb ($24), a 12-piece combination of all three, with your choice of an added Ikura (salmon roe and cucumber) Una (eel, mint leaf and wasabi cream sauce) or Spicy Una bomb. Pair all that rice and roe with some sake-based booze and hang out in the restaurant's lovely back garden for a real dining treat.

Bozu is located at 296 Grand Street between Roebling and Havemeyer Streets in Williamsburg, Brooklyn (718-384-7770, oibozu.com). 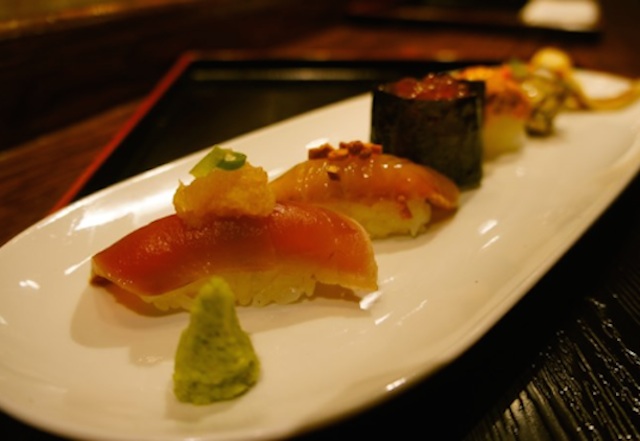 SUSHI YASAKA: We showered praise upon this popular Upper West Side spot for their umi no sachi ($26) last year, and it's still one of our favorites in the city. The low-key eatery draws in neighborhood locals and sushi connoisseurs alike, serving super-fresh rolls at reasonable costs—there's no rococo $200-plus tasting menu to be found here, and that suits Sushi Yasaka just fine.

The aforementioned umi no sachi is still a major draw, featuring plenty of fresh raw fish, shrimp, egg and other goodies on a bed of rice and radish; you can also order as many basic maki rolls and hand rolls as your body can handle, with prices ranging from $4-$7. The a la carte sushi and sashimi rolls, which include speciality fishes like live scallops and Japanese snapper, never disappoint. 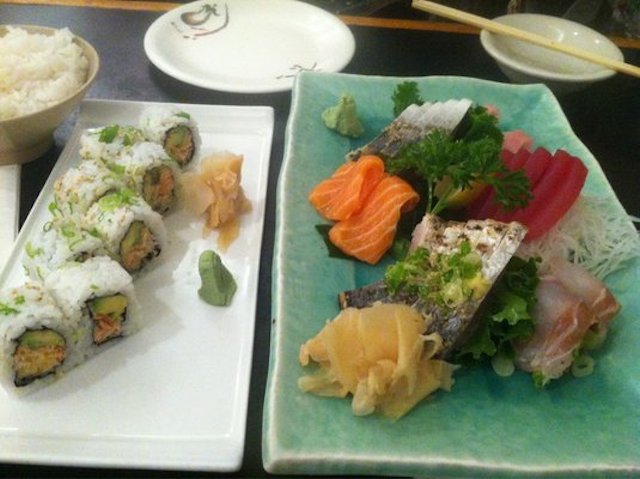 GEIDO: A meal at Geido feels a little more like stumbling into your neighbor's graffitied basement instead of a sushi joint, but the scribbled children's drawings that adorn the walls of this charming Prospect Heights spot just serve to amplify the restaurant's laid-back, local atmosphere. Sushi here is pretty basic—dragon rolls ($10), eel sushi ($2.25 per piece) and spicy tuna rolls ($4) rule the roost here, though specialty items like an "Obama" roll (tuna, salmon and yellowtail topped with crunch) and the Spicy Mexican roll ($4.50) are well worth a try. Do not attempt to visit Geido while hungover—aside from the fact that raw fish is death to the whiskey-battered stomach, the lights in this place are BRIGHT. 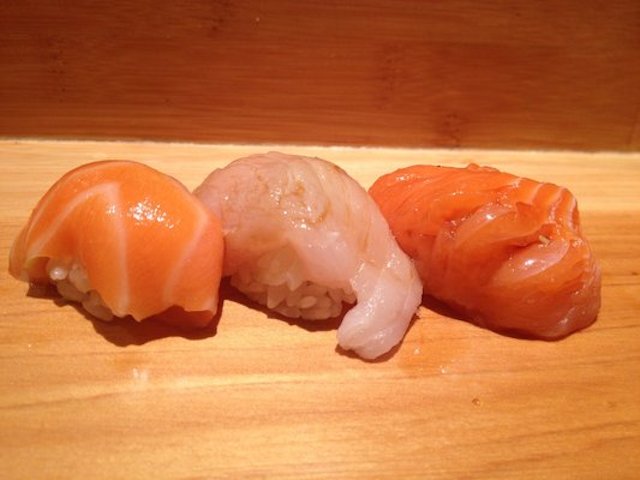 SUSHI YASUDA: Sushi Yasuda is one of the most celebrated sushi restaurants in the city, and for good reason. Since its founding by sushi master chef Naomichi Yasuda in 1999, the Midtown restaurant has created consistently spectacular raw fish dishes, with an outstanding (if, at $200-plus-per-person, pricey) omakase and a dedication to both quality and tradition unsurpassed by other American sushi eateries. Though Chef Yasuda has since left his New York restaurant to open another spot in Japan, Sushi Yasuda is still as sublime as ever. It's also worth noting that the restaurant has eliminated gratuity in favor of compensating waitstaff with higher salaries and benefits. 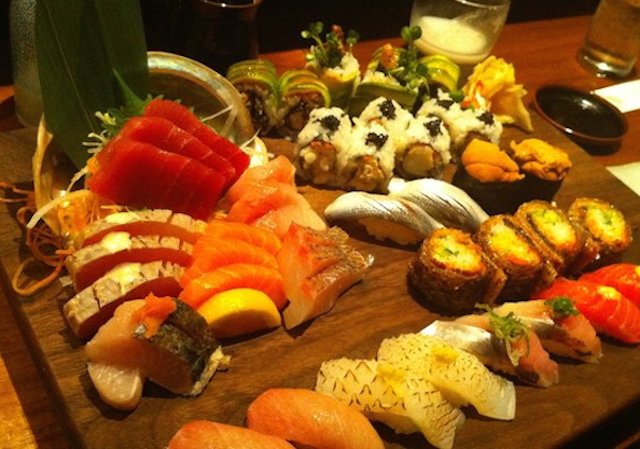 BLUE RIBBON SUSHI: There's more than one Blue Ribbon sushi bar in town, but this SoHo standby is our pick, serving up supreme sushi and sashimi in their stylish, nearly subterranean space. Basic maki rolls like spicy crab ($12), sake ikura ($14) and enochi and hamachi ($10.25) are tasty enough to sate you, but you can't go wrong springing for the higher end sushi and sashimi rolls, which run the gamut from unagi (fresh water eel, $5) to blue crab ($5.75) to jellyfish ($4).

Blue Ribbon Sushi is located at 119 Sullivan Street between Spring and Prince Streets in SoHo (212-343-0404, blueribbonrestaurants.com). 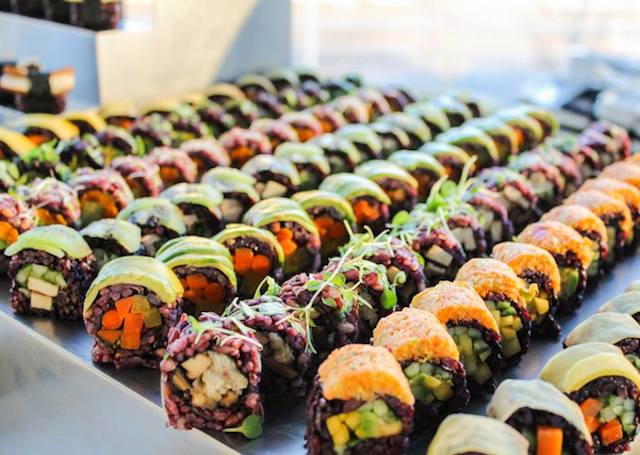 BEYOND SUSHI: It's not easy to get inventive with vegetarian sushi, but the folks at this Gramercy joint have figured out how to jazz up their rolls without the fish. Veggie-friendly options include the Crunch 'n Munch ($6.65), a colorful, black rice-wrapped roll crafted with alfalfa, English cucumber, baked tofu and kiwi; the fiery La Fiesta ($6.65) comes with avocado, pickled jalapeño, chayote and cilantro; and the Sweet Tree ($6.65) is stocked with avocado, sweet potato and alfalfa sprouts. It's also worth checking out their special Roll of the Month, an always inventive combination of vegetables, fruits, fungi and legumes. 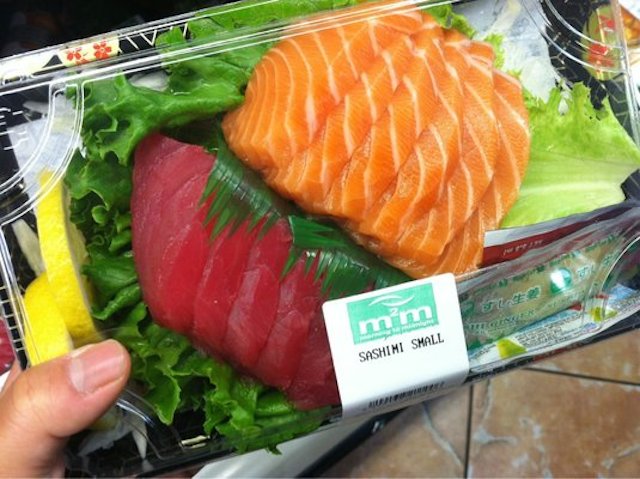 M2M: Sometimes a body just needs to eat California rolls out of a plastic container on a bench outside St. Mark's Church. In our experience, food market M2M—often found where scurvy-afflicted college students roam—sells the best packaged sushi in town, made fresh daily and priced around $5-a-pack. If you're brave enough to make your own sushi, they also sell high-grade tuna and other raw fish ready for you to butcher with your own scalpel, but we'll stick with the pre-made stuff while our refrigerator's still just a wine closet.