The 10 Best Restaurants In NYC For Picky Eaters

There's one in every group. The one who orders their steak "well done" or their eggs "regular." The one who insists that they've eaten sushi because "California rolls count" and won't touch "too exotic" kofta kebabs even though they're essentially well-seasoned hamburgers. We feel your pain, people, and we're here to help.

Sure, you could succumb to the pressure and eat at Shake Shack or the diner whenever you're stuck doing dinner with these people or you could slyly force them out of their comfort zone by taking them to a real restaurant (sorry Danny Meyer) and offering them more gourmet versions of the dishes they're clinging too with their tiny, pudgy baby hands. Below, a few of our favorites for eaters of a particular persuasion; as always, leave your suggestions in the comments. 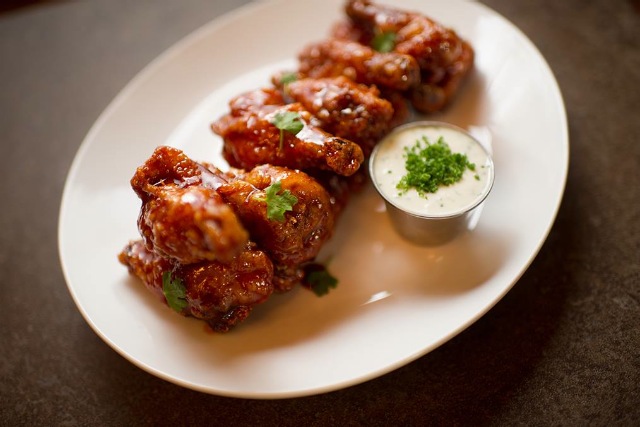 DISTILLED NY Yes, there's a special chef's counter at this buzzy Tribeca restaurant, but you know what's one item you'll seeing flying out of the kitchen the most? Chicken wings. It's this dichotomy that makes chef Shane Lyons' spot a go-to for both gourmands and their meat-and-potatoes friends. While one can sup on Liver Pate, Beef Tongue and Smoked Duck Breast, the other can opt for the Distilled Wings—made gourmet with a Gochujang glaze—homemade Tater Tots and a NY Strip Steak & Potatoes. Another great feature of the gastropub is the bar, which is usually packed with sports-watching suits who give the entire space a convivial atmosphere. 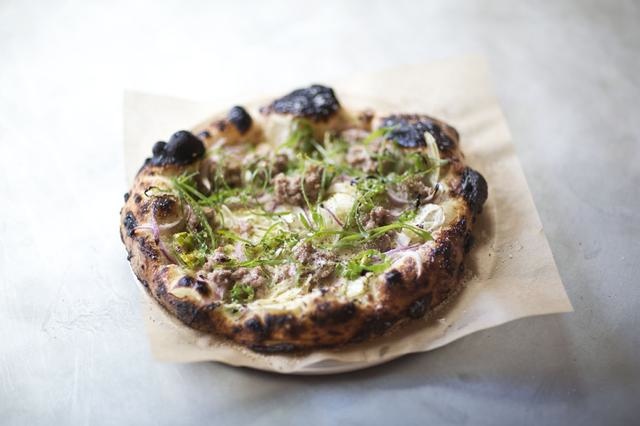 L'AMICO Is there any person on the planet who doesn't like pizza? Possibly, but they should be isolated and possibly shipped off to Mars to prevent spreading their bad taste to other humans. Pizza is the universal crowd pleaser and the pies coming out of Laurent Tourondel's bustling Midtown eatery are familiar enough to entice skeptical diners while giving them a little taste of what life's like on the other side. Safest of all, the Soppressata Picante pie, topped with tomato, mozzarella, Sicilian oregano and the fiery cured meat.

Aside from pizzas, the oven does double duty on the Veal & Pork Meatballs served with buttery garlic focaccia and the pastas here are top-notch, too. Like all Italian food, dishes are comforting and rustic, from a simple Roasted Chicken with greens to steakhouse-style Skirt Steak served with parmesan creamed escarole and mushrooms. 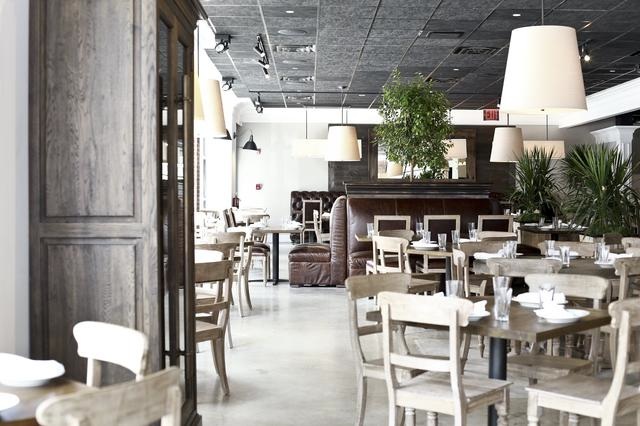 MP TAVERNA Celebrated Greek chef and goatee aficionado Michael Psilakis does fresh, Mediterranean cooking at his quartet of MP Tavernas, two of which are located in New York City. Flavorful dips like hummus and spicy feta aren't so out of the ordinary these days thanks to grocery store brands dipping their toes into the genre and simply grilled fish, chicken and steaks don't take any mental gymnastics to figure out. For the rest, sausage platters, tender octopus, crispy cod and brown butter scallops.

The chef's Williamsburg outpost also boasts The Hall, a live performance venue that offers a seated dinner during the show. The kitchen will also tailor the meal to suit the theme of the evening, so think cajun cuisine for funk groups from New Orleans and biscuits and gravy and pulled pork for an "American Roots" series. 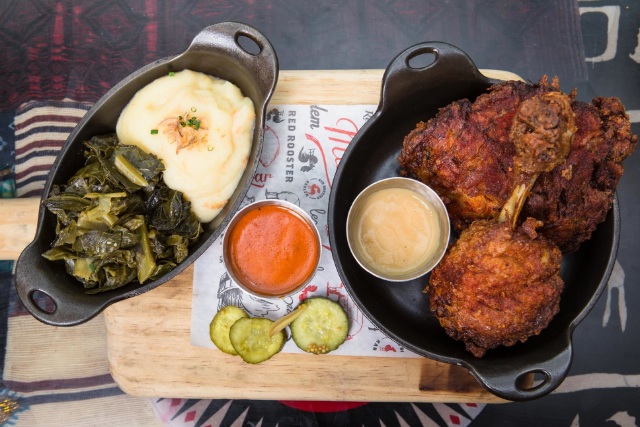 RED ROOSTER Harlem's restaurant home is now home to dozens of old school soul food spots and trendy new American eateries. Marcus Samuelsson's much-talked-about restaurant falls square in the middle of the two, offering soul food staples in a snazzy environment full of life and music. The Fried Yardbird is what most people order here and with good reason; Samuelsson finesses the dark meat to a crunchy exterior and serves his bird with a white mace gravy and mashed potatoes, as he should.

You probably won't get a picky eater near the Gravlax or Funky Fish escabeche, but Wild Wild Wings are usually an easy sell, as is the Triple-Double Burger topped with bacon and Jarlsberg cheese. If nothing else, get your dining partner buzzed on one of the bar's excellent cocktails and spoon feed them Mac & Greens like a baby. 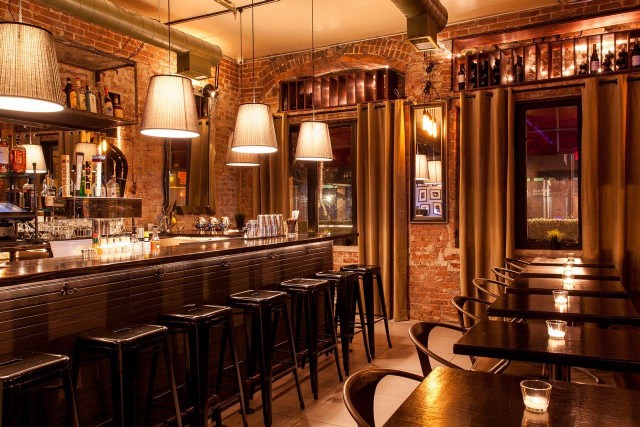 CHARLIES BAR & KITCHEN There's a Texan chef turning out the tasty dishes at this South Bronx cocktail bar and kitchen, meaning there's everything from tacos to fried chicken to steak (of course) on the menu. There are frequent specials to be found, like hearty crocks of chili and Shrimp & Grits, which have previously been served in a cheddar bread bowl, which is how all future iterations should be served. Wings are a big deal here, with special $.50 nights if you time it right; during lunch, the elusive patty melt.

The bar scene is a fun one, especially their cocktail program, which includes a Fall Sangria and The Bronx, made with vodka, blood orange, lemon juice and simple syrup. Happy hour lasts til a respectable 8 p.m. and there are Smoked Chili Pork Rinds and Hushpuppies to keep you upright until then. 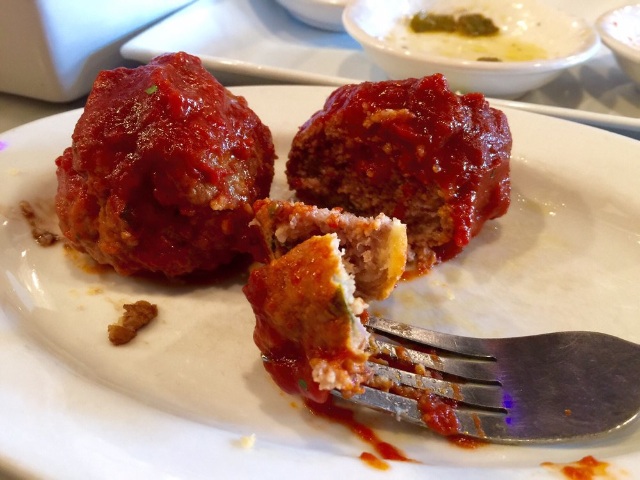 ENOTECA MARIA A different nonna for every night of the week is what you'll find at this darling Staten Island spot, where a grandmother from a different region of Italy takes over the kitchen each night to prepare a homemade meal. Recently, that meant a nonna from Schio, Veneto, who prepared an offal-heavy meal packed with pigs feat, lamb hearts and even beef testicles. If you're wondering why a squeamish eater would dare set foot inside, consider that these women are used to feeding large groups with different palates. That same menu also offered Polpette (homemade meatballs in tomato sauce), imported Burrata, stuffed peppers and even a simple Pizza Margherita.

Grandma just loves you and wants you to be happy. You look thin—have you been eating enough? 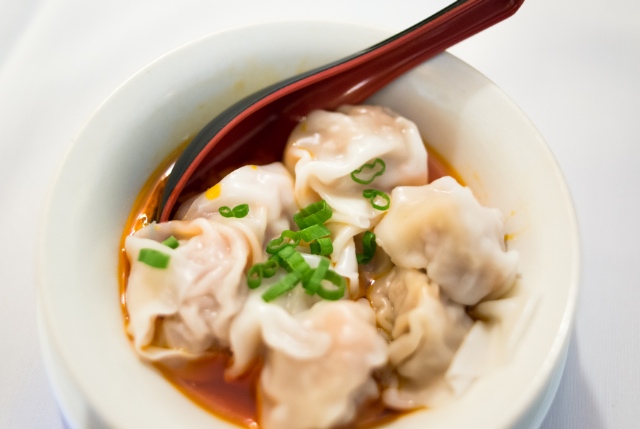 GRAND SICHUAN HOUSE The best thing about this no frills Bay Ridge spot is the food; the second best thing is the variety of food, which goes beyond the flavors of the Sichuan province to encapsulate many other flavors and styles found around China. That means if half of the group wants the tongue numbing affects of sichuan peppercorns they can opt for the Chong Qing Spicy Chicken or the dry fried Sliced Lamb with Cumin Flavor while the other half can stick to their comfort zones of Lo Mein and General Tso's Chicken. Owner David Chan makes his hot red oil every single day to his specifications, so maybe the group can compromise over an order of his excellent Sichuan Wonton with Red Oil. 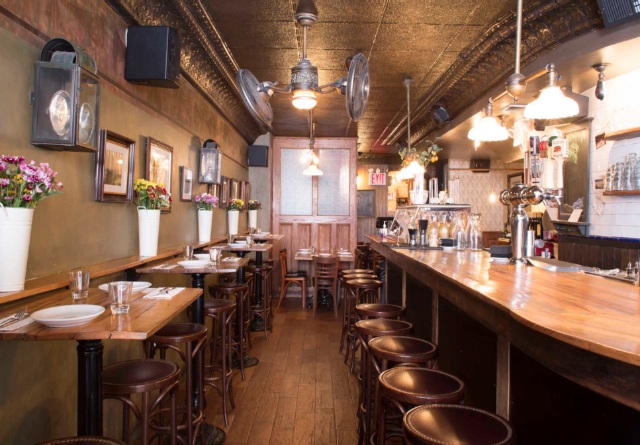 RUBIROSA When in doubt, go big or go home, which is exactly what you'll be doing at this red sauce spot that'll feed a crowd with its hearty pastas and pizzas. Where fussy Neapolitan has become de rigueur for city pizzerias (see L'Amico, above), the kitchen is doing old world style pizzas with a pedigree that traces back to legendary Joe and Pat's on Staten Island. People are always shouting about the Vodka pie here, but the restaurant will accommodate half-and-half pizzas if that's not to everyone's liking. Hefty portions of Ricotta Ravioli, Eggplant Parmigiano and Caesar Salad are fool-proof orders to supplement a few crisp crusted pies. This is also an excellent option for visiting family who insist on eating in Little Italy, despite shake fisting from the natives. 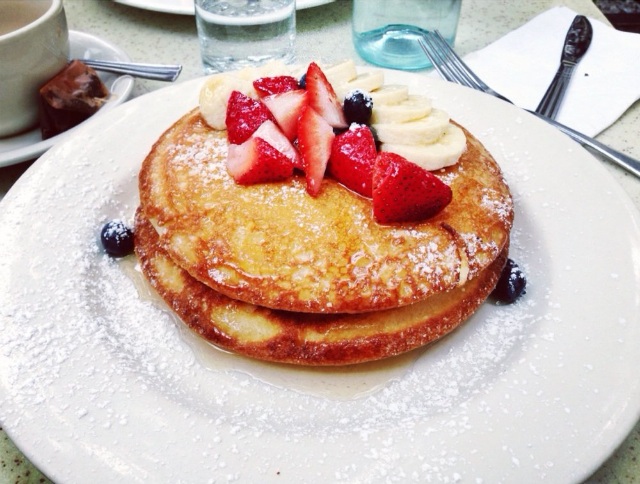 CAFE LULUC Most nights of the week, this French bistro offers a special menu, like their Monday night Pasta Night with bowls of noodles all priced under $10 and their Wednesday night Burger Night, which gets you a beef, turkey, veggie or fish burger for under $9. The regular menu is ample and filled with a variety of salads, sandwiches and entrees that'll take a small lifetime to sort through; more options equals more chances of a happy table. Though brunch can be vexing for a variety of reasons, Cafe Luluc's pancakes can bring people together in the most delicious way possible. 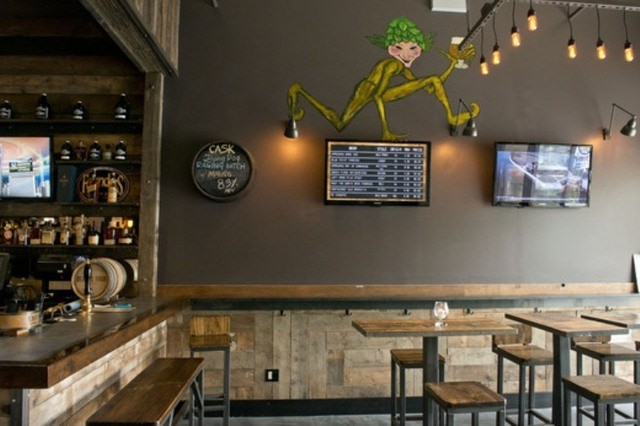 STATION HOUSE Beer, whiskey burgers. That about sums up all you'll need to convince a friend to check out this casual Forest Hills pub, which boasts an impressive beer selection that changes regularly and an even more impressive list of bourbons, ryes and scotches. To accompany all that booze, a Decadent Burger topped with Boursin cheese and wild mushrooms—or a Bacon Cheddar Burger if that's too fancy—plus Steak and Potatoes in two sizes, Smoked Country Pork Ribs in half and full racks and sides of onion rings and house slaw to accompany. For the gourmand, a huge bowl of Fried Chicken Livers out to do the trick, as will Braised Pig Cheek Focaccia, Bourbon Pate, Haddock & Chips and a Lamb Burger Pita.

#best of
#best of gothamist
#picky eaters
#original
Do you know the scoop? Comment below or Send us a Tip