Last week, we celebrated our favorite bars; this week, our favorite new restaurants of the year, from ramen-yas to tasting menus to the best damn pork sandwich in the city. 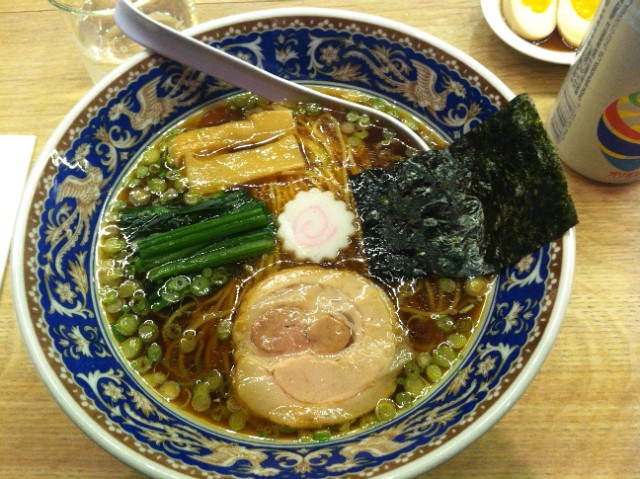 RAMEN LAB Sun Noodle, the venerable makers and distributors of noodles to some of the city's best ramen shops, opened this small, standing-room-only restaurant as an incubator for up-and-coming ramen chefs and as a platform to showcase their many styles of noodles. The schtick: every few months, a different ramen-maker will take over the miniscule kitchen space inside ramen lab, offering their distinctive interpretations of Japan's famous fast comfort food. The result: an ever-changing and evolving ramen experience unbound by anything other than the mind of the chef behind the counter. 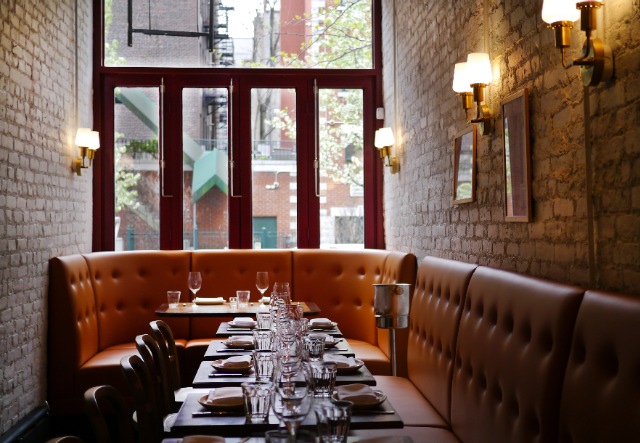 VIRGINIA'S A Per Se vet and a Loconda Verde alum are making a walk to the farther reaches of Alphabet City a very desirable dinnertime activity. In a neighborhood that's a draw for its dive bars and casual bistros, Virginia's is a beacon of unfussy fine dining at a price point that's cognizant of its surroundings. Beautifully composed plates are made up of market-driven ingredients, expertly finessed by chefs Christian Ramos and Reed Adelson, to form delicious but approachable fare.

On Monday nights, the restaurant transforms with a Bistro Menu geared towards a more casual dining experience, including a Grilled Ham & Swiss sandwich and a succulent burger topped with Cabot cheddar and a vidalia onion marmalade. 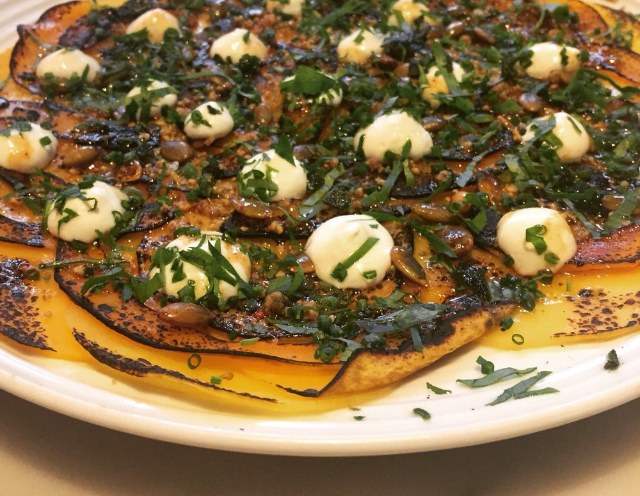 SANTINA The perpetual hype-makers at Major Food Group have a knack for opening splashy places that have both professional food critics and their voracious readers clamoring for a table—and they open a lot of restaurants. Of the two newcomers this year, I'd spend my money on this Meatpacking District charmer again in a second. Coastal Italian's the theme here and it's reproduced not only in the flavorful, seafood-heavy dishes but in the staff's resort-chic uniforms and the kitschy but fun decor, with its over-the-top chandeliers and tropical plants.

I never had Squash Carpaccio when I visited the Amalfi Coast, but I'll be damned if it wasn't one of the better things I put in my mouth this year. Buttery, crunchy, earthy and comforting, it's a collection of humble ingredients elevated to mouthgasm level. One of the Cecina are a must-order as well, like the Calabrian tuna, served with an enormous, griddled pancake for DIY scooping. Spoon on one of the fiery, homemade sauces to complete the perfect bite. 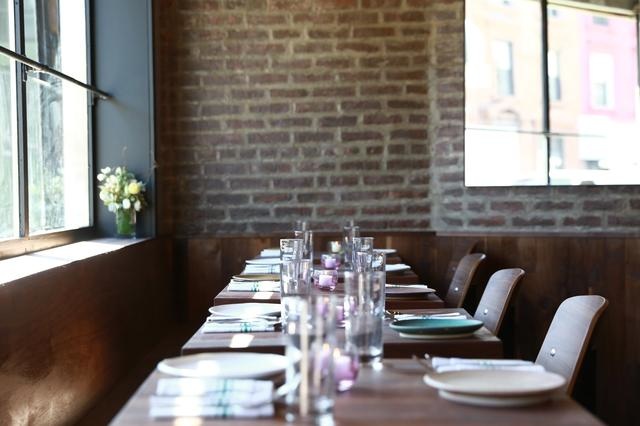 WILLOW Beneath the rumble of the A train and the bustling Fulton Street traffic, it's east to miss Willow, an understated new offering from the team behind Gowanus restaurant The Pines. The dining room eschews flash for cozy comfort, which in turns makes the elegantly composed dishes stand out even more. The menu isn't likely to be the same between return visits, but steadfast is chef John Poiarkoff's attention to details, from textural elements like nuts popping up in unexpected place, to contrasting flavor notes, to the occasional novelty item. 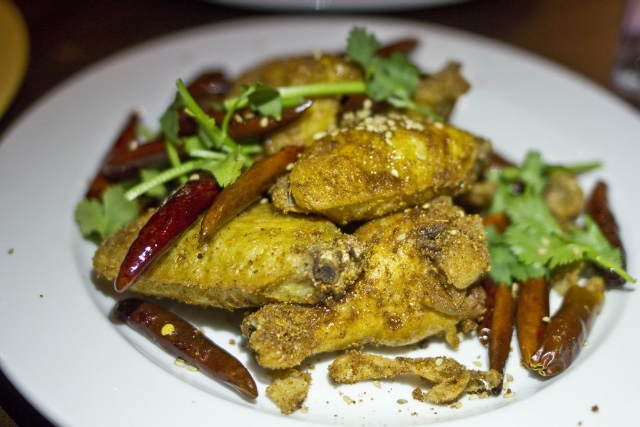 MISSION CHINESE Following a critically-lauded—but structurally troubled—first run on Orchard Street, Danny Bowien moved his Mission Chinese operation over to a new spot on East Broadway, along the way, transforming the humble party spot into a lavish dining destination. The transformation was dramatic enough to warrant an inclusion as a new eatery here, as the menu has been almost completely overhauled and the general focus of the restaurant tighter and yet more ambitious than at the outset.

More focused, sure, but also keeping the playful spirit that made the original so popular. The opening menu offered a cheese pizza mixed in with the restaurant's popular Kung Pao Pastrami; Chongqing Chicken Wings, which are fried in beef tripe batter, flew out of the kitchen at a fervent pace; and the Chewy Green Tea Noodles were likely one of the restaurant's most Instagrammed dishes of the new operation, if not one of the eatery's most delicious. 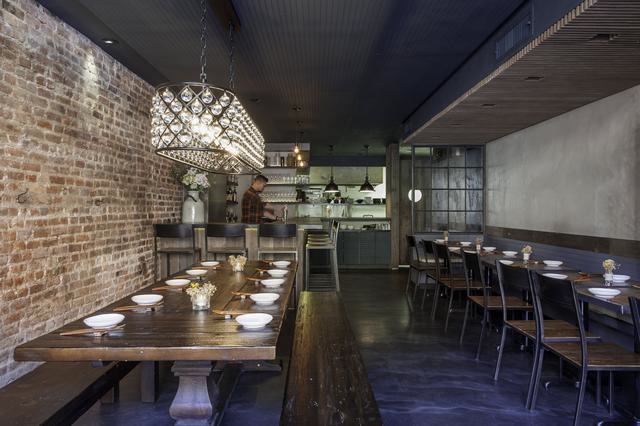 OIJI Oiji's take on Korean food elevated the comfort food game to the stratosphere, toppling the dominant burger-and-fried-chicken reign in its path. The "Jang-jo-rim," which at its most basic is a bowl of heavily buttered rice topped with beef and a soft boiled egg, is a warm sweater from grandma, while the Truffle Seafood Broth with Sizzling Crispy Rice is an elegant cashmere to stave off winter's chill. Their version of fried chicken isn't the crust-heavy affair we're accustomed to with Southern-minded cuisines. Instead, it's dredged in tapioca flour, lending the resulting batter an ethereal quality. And finally, a bowl of Honey Butter Chips is one of the year's most addictive snacks and the only "dessert" on the menu. 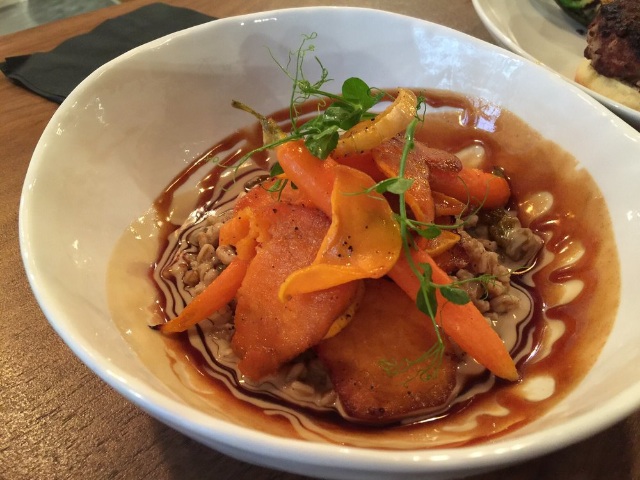 TIMNA If at the beginning of the year you'd told me two of the best dishes I'd eat this year were going to be what essentially boiled down to vegetable salads, I would have laughed into my Nacho Helmet. And yet, here I am 12 months later going gaga over a plate of cauliflower and another of farro and vegetables from Timna, a romantic Modern Israeli spot with chef Nir Mesika in the kitchen. It's hard to resist the Kubaneh bread, which arrives flowering out of a clay pot with crocks of tangy labaneh and a crushed tomato dip; the bread is buttery and flaky, with a crisp top studded with sesame seeds.

The call of the carb is strong, but exercise some temperance and save room for Mesika's entrees, like the tender Bedouin Octopus with eggplant puree and the East-West Duck, with crunchy petals of bok choy and puffed rice pieces that pop in your mouth. 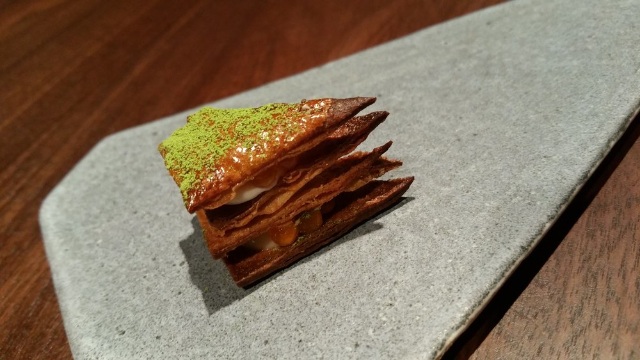 MOMOFUKU KO Has it really been seven years since David Chang forcefully tried to rewrite fine dining with the original incarnation of Momofuku Ko? The tiny, impossible to get into tasting menu pioneer moved out of its First Avenue digs late in 2014, taking up a new residence and a new feeling on Extra Place. The new Ko features a U-shaped dining counter that somehow feels both spacious and intimate, as well as tables for larger parties. You'll still get a top-notch tasting menu full of well executed food, but there's also now an excellent wine list and polished service to match the price tag ($175/pp for dinner). Adventurous without being unpolished, pleasurable without being stuffy, Momofuku Ko has grown up without losing its edge. (Dan Dickinson) 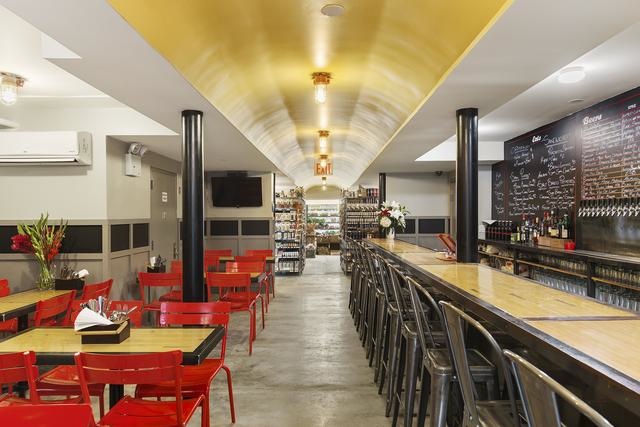 MEKELBURG'S I could write an entire ode just to the porchetta sandwich at this hybrid gourmet grocer, bar and restaurant—oh wait, I did—but that's just one component to what makes this Clinton Hill space so special. First, there's husband-and-wife duo Daniel and Alicia Mekelburg, who began their culinary journey operating a clandestine supper club and have translated that intimate dining experience into a casual, neighborhood restaurant that elicits warm feelings and eager returns. Then there's the carefully curated front market, which carries springy loaves of babka, oozing crocks of Jasper Hill Farm's Harbison cheese and private label olive oils.

And finally the house-made dishes honed over years cooking intimate dishes for relative strangers. Fall in love with their porchetta sandwich, as I did, piled high with broccoli rabe, parmigiano and that signature crackling pork skin. Or be seduced by a wanton orb of creamy burrata, lasciviously draped over a hunk of roasted acorn squash. Or be knocked on your rear by a salt baked potato stuffed with smoked black cod and topped with a dollop of creme fraiche, a scatter of dill and a generous spoonful of caviar. Here, take my hankie—you've got some drool on your desk. 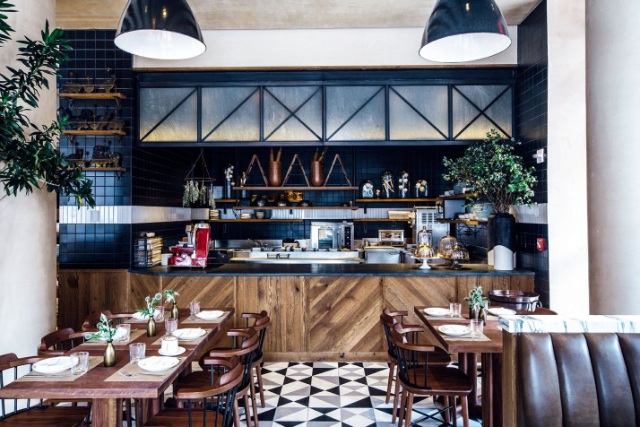 L'AMICO New York City could use more crowd-pleasing restaurants, where the food is good, the atmosphere cheerful and relaxed and you can bring parents, guests or even a date with equal confidence. Laurent Tourondel's buzzy new pizza spot in Midtown fits all of that criteria, turning out blistered pizzas, piping hot meatballs served with buttery focaccia, giant bowls of pasta and succulent roasted meats. Like all Italian food, dishes are comforting and rustic, from a simple Roasted Chicken with greens to steakhouse-style Skirt Steak served with parmesan creamed escarole and mushrooms. It's not reinventing the wheel, but why mess with a perfect design?

Honorable Mention: The funky grains of Faro in Bushwick, the gourmet Brazilian at Cozinha Latina in Greenpoint, the superlative shrimp and grits at The Heyward in Williamsburg, the new wave French at Rebelle in Nolita, Danny Meyer masters the museum at Untitled at the Whitney and wine comes down to earth at Wildair on the LES.