For today's Quick Bites, we're taking a look back at the best of 2016!

I ate in approximately 150 different restaurants, cafes, bakeries, ice cream parlors, slice joints, pop-ups, food trucks, and kiosks this year, most of them new in 2016. Here's a look at some of my favorites. 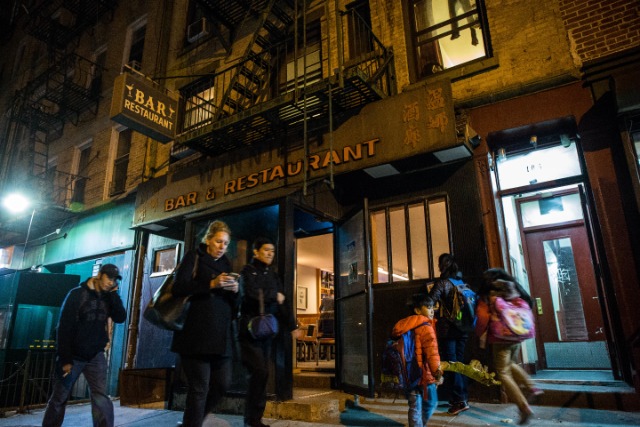 Best New Restaurant: Lalo
Chef Gerardo Gonzalez moved this year from a laughably tiny "kitchen" at El Rey to comparably palatial digs at Lalo, and oh man does his cooking soar in the bigger space. I've eaten just about the entire Lalo menu at this point and there are winners all over the place, from the spicy, snack-y riff on a PB&J to a feta salad thick with green mole to the impossibly tender octopus made hearty with hominy. Gonzalez's best dishes hit you with an unexpected twist—fiery pomegranate seeds! nutty cow!—and he's a genius at staying just on the right side of chaos. The music here is good, the room lively but not too loud, the food exciting and satisfying. Every time I leave I can't wait to eat here again. 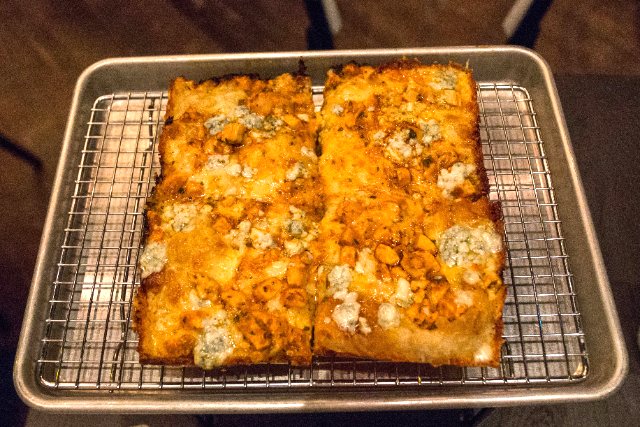 Best New Pizza: Emmy Squared and Massoni (tie)
Williamsburg's Emmy Squared, a sequel of sorts to the beloved Emily of Clinton Hill, had this category won in a walk for most of 2016, their Detroit-style rectangle pies—the crust is thick, chewy, crispy, and cheesy; the sauce and toppings ladled and piled on with glorious abandon—instant classics in a city already flush with great pizza. Then it was almost as if chef Dale Talde, of Park Slope's Talde renown, ate at Emmy a few times and thought "Hey I want to do this square-pie stuff" and so developed a half-dozen reeeeeally similar pies for his Midtown hotel-restaurant Massoni, which opened in November. And Talde nailed it too! The crust at Massoni maybe packs a bit more punch, the toppings at Emmy maybe a bit more balanced, but really, they're equally fantastic, and we are lucky to live in a city with plenty of room for both. 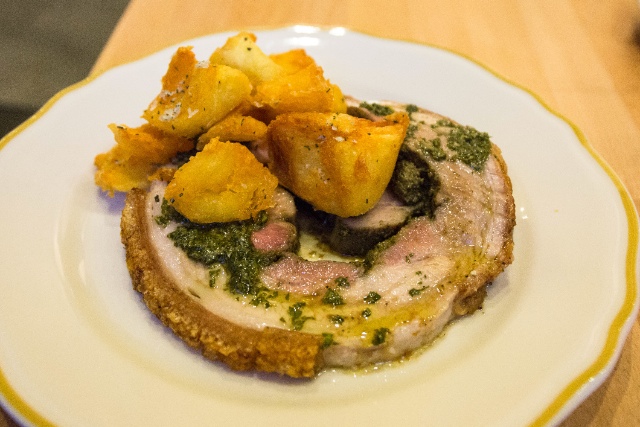 There are lots of very good things to eat at White Gold, April Bloomfield's Upper West Side butcher shop, lunchtime counter-service cafe, dinnertime table-service restaurant. The Chopped Cheese sandwich, the Rotisserie Chicken, the Sourdough Toast soaked in meat droppings, the Beef Heart, served nice and rare: all highly recommended dishes. But the single best plate of food I ate all year might have been Bloomfield's magnificent Porchetta, with its layers of sweet fat, tender meat, and crackling skin brought together by a lovely strong green sauce. Pure porcine perfection. When I had the dish at lunch Bloomfield threw on some triple-fried potatoes which, if you've ever had her fries at the Breslin, you know are a magical combination of flavors and textures. What a huge win for the neighborhood. 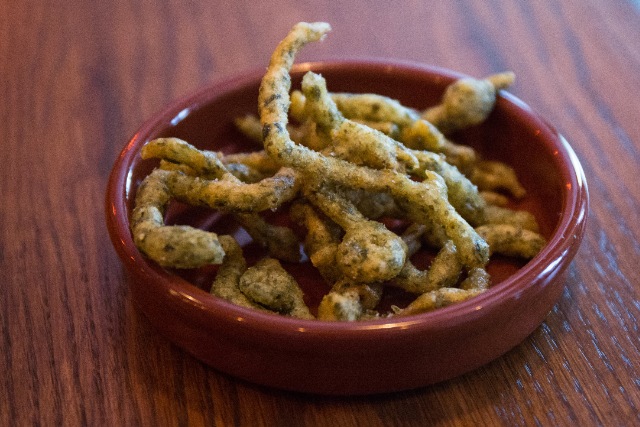 Best New Free Snack: Sourdough Seaweed Puffs at Sunken Hundred
Will Welsh gastropub Sunken Hundred, which opened late summer in Cobble Hill, conquer the Smith Street Curse? If this freebie snack your charming server places on your table while you await an array of mostly fishy delights is any indication, the answer, we hope, is a resounding "ydw!" The craggy deep-fried bits of sourdough bread here are, like many things on the menu, laced with laver seaweed imported from the shores of the homeland, adding an intensely oceanic undertow to the crisp and chewy treats. 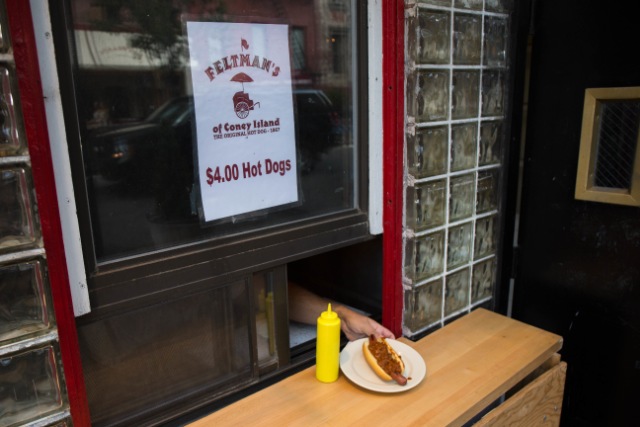 Best New Sandwich: Feltman's of Coney Island
Is a hot dog a sandwich? [Ed. Note: Yes?] Can said hot dog be considered "new" if it's been around since 1867? Tough questions, these, which I will now totally duck. Because over the summer a tiny sliding window opened on St. Marks, through which exuberant historian Michael Quinn will pass to you the absolute best hot dog, new or otherwise, in the city. The Feltman's red hot is a reboot of the Coney Island classic, considered the first-ever served in the country, and it is crisp and juicy, all-beef and uncured, slightly charred and snappy-skinned. Topping choices are minimal—kraut, grilled onions, chili, mustard—but that's fine, because this beauty doesn't need any tricks or gimmicks to satisfy. 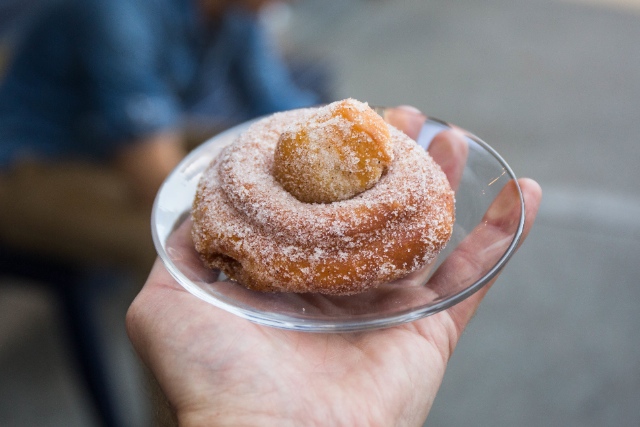 Best New Bakery: Mah-Ze-Dahr
When I stopped by the sublime Mah-Ze-Dahr Bakery last week for a couple of cookies to bring to the movies, bakers Umber Ahmad and Shelly Barbera were busy in the back packing up a mountain of holiday orders, to be shipped all over the world. And not for the first time, and presumably not for the last, did I marvel at how lucky I am to live right here, the best city on the planet, home to all the wonders and riches you could hope for. Anyway, everything at Mah-Ze-Dahr is special and delicious, including the savory offerings, but a good starter kit would include a Chocolate Explosion cookie, with its magically crispy, chewy, melt-on-your-tongue texture and deep cocoa flavor; a Brioche Doughnut, speckled with sugar crystals and filled with custard; and a gooey Mah-Ze-Bahr bar, packed with chocolate chips, salted caramel, toasted pecans, and seemingly six pounds of butter. 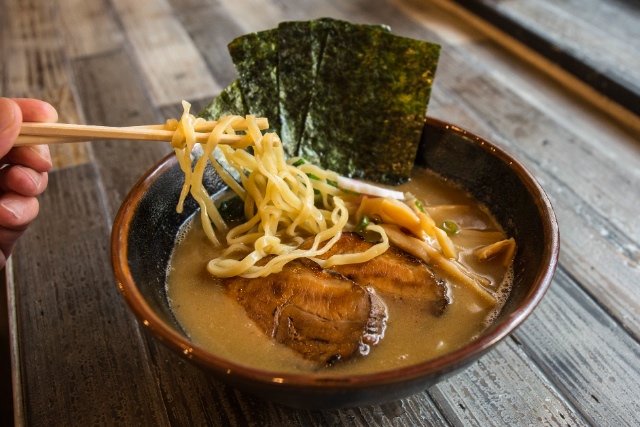 Best New Noodles: Quiet Storm at Ramen Shack
Keizo Shimamoto may be best known for his Ramen Burger—three-plus years later and his booth at Smorgasburg still drew massive lines every week—but he's also one of the great straight-up ramen chefs working in NYC today, so when he transformed the front part of his Long Island City commissary into a noodle counter, we were there on day one. The menu here is ever-evolving as Shimamoto experiments with new techniques and ingredients, but the signature Quiet Storm, a nod to Mobb Deep's Havoc, who grew up in the Queensbridge Houses across the street, is the first bowl you should get, with its insanely rich (though somehow not overwhelming) broth, tender and fatty chasu, and a generous tangle of flat Sun Noodles. 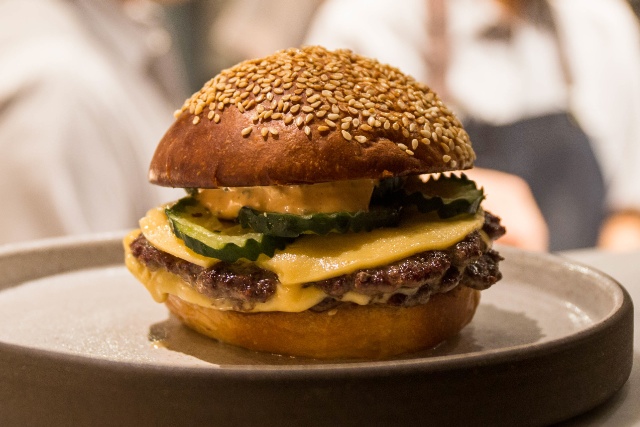 Best New Burger: The Classic at Salvation Burger
More April Bloomfield! Salvation Burger, unfortunately located in a hotel in the East 50s, and even more unfortunately closed for much of the year due to a fire, finally reopened earlier this month to much rejoicing. The reason for the renewed excitement: Bloomfield's Classic Burger, a double-patty meaty monster, dripping with a robust "special sauce," oozing housemade American cheese, with plenty of pickles on top for added bite. And the sesame seed bun is superb. Yes, at $17 it costs more than four times as much as its fast-food counterpart, but it's also about ten times as good. 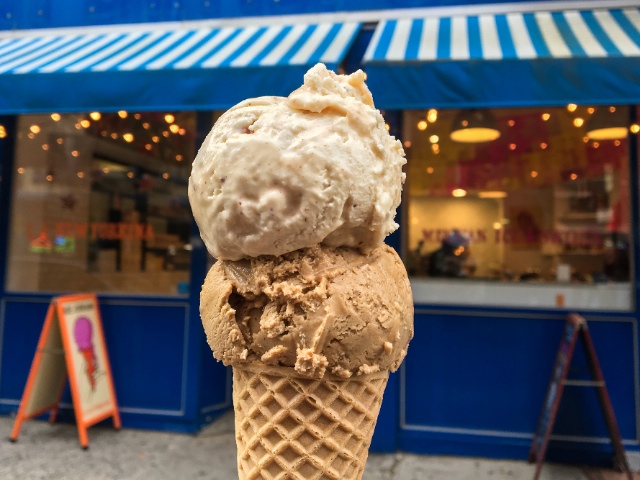 Best New Ice Cream Parlor: La Newyorkina
Two months after opening her first La Newyorkina storefront, Fany Gerson's Greenwich Village ice cream parlor has really hit its stride. There are paletas here, of course, and Gerson's popular popsicles are, no question, an excellent summertime refreshment. But it's her new ice cream operation that really makes this a destination-worthy dessert spot. Wonderfully smooth and loaded with big, Mexican-style flavors—a recent selection included Oaxacan Chocolate Chunk, Tres Leches Cake, Horchata, and Rompope (which is like egg nog)—everything here is terrific. Get a scoop or three on a cone or create a sundae with lively sauces like Chipotle Hot Fudge and Cajeta (sweetened caramelized goat's milk), and Gerson's homemade baked goods and candies as toppings. 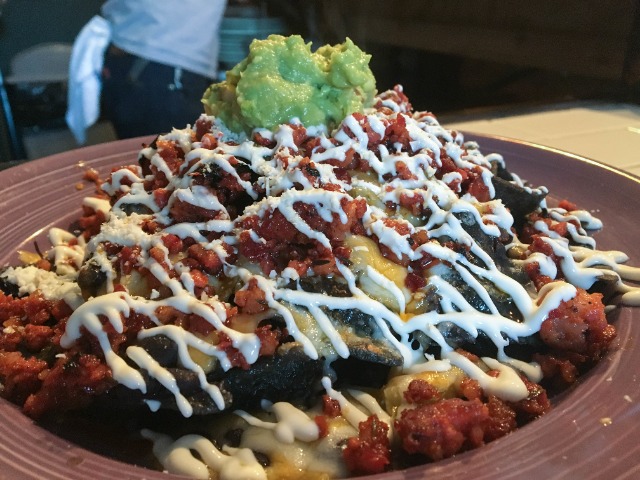 Best New Nachos: El Altoradero
To be honest, El Altoadero, Denisse Lina Chavez's stellar Prospect Heights Mexican restaurant, probably also wins Best New Tacos, Burritos, and Quesadillas, but it's her nachos that I most crave between visits. The chips are thick and fried to a crisp, and more than hold their own under a miraculous barrage of melted cheese and creamy, fiery sauces. Get them loaded up with your choice of carne, of course (my favorites are the chorizo, or the tongue), and be prepared to battle with your tablemates to see who can wolf down the most.

#best bites 2016
#best of gothamist
#quick bites
#original
Do you know the scoop? Comment below or Send us a Tip