The 10 Best New Bars In NYC

We sipped cocktails, shot bourbon and chugged beers—all in the name of journalism—and have determined the best of the city's new bars that opened this year. The cocktail trend kept on at a feverish pace, but throwback Budweiser-touting dives also crept into the mix. All in all, it was a great year to leap off the wagon and embrace tipsiness with reckless abandon. Below, our favorite new watering holes from 2014; leave your favorite tippling joints in the comments. 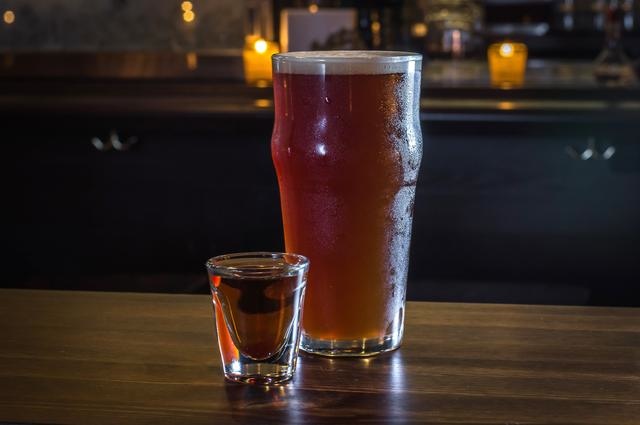 BOILERMAKER Before we lay it to rest, we should thank Williamsburg for its important resurrection of the shot-and-beer combo known as the boilermaker. That legacy has been streamlined and played with at this East Village bar, which takes the classic drink combo beyond a Tecate and tequila and into something less akin to a college bender. There are still $6 versions on the menu—a blessing for those of us still on college budgets—plus updates like Beer Eye On The Straight Rye ($10), an imperial pint of Two Brothers Cain & Able Red Rye Ale with a sidecar of Sazerac 6 Year Rye.

But there are other factors that set this bar apart from the hundreds of others luring patrons in with cheap deals, namely their excellent on-tap cocktail menu, an outstanding (and reasonably inexpensive) pub burger and some out-of-sight, off-menu wings doused in curry sauce. That the bar opts for low lighting and dark corners makes it ideal to down basket upon basket in relative anonymity, and a blessing for the bleary eyes you'll receive after round three of boilermakers. 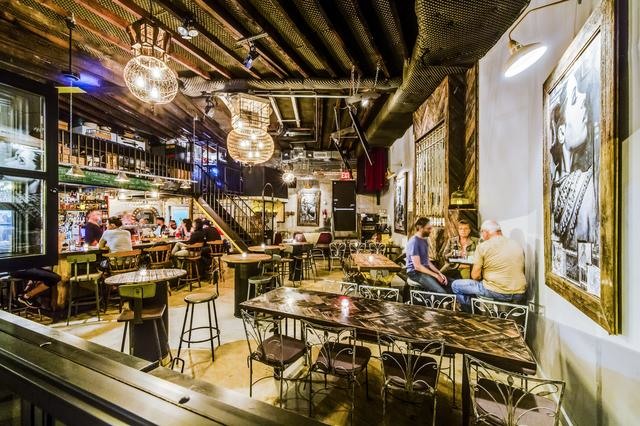 FORREST POINT This Bushwick newcomer could be on the list for its incredible outdoor space alone, boasting fruit trees, swinging seats and a beautiful, twinkling twilight atmosphere. But the bar has proven to be much more than its verdant exterior, offering incredible cocktails and delicious, unusual pub grub on top of that. Mixologist Dustin Olson wowed us with his excellent milk punches, especially the Fancy Pants ($9), made with rum, bourbon, sherry all fused together with pineapple, lemon, tea, spices and sugar. They're also making one of the borough's best new burgers, seared in a cast iron skillet and topped with pickles and a house-made sauce. 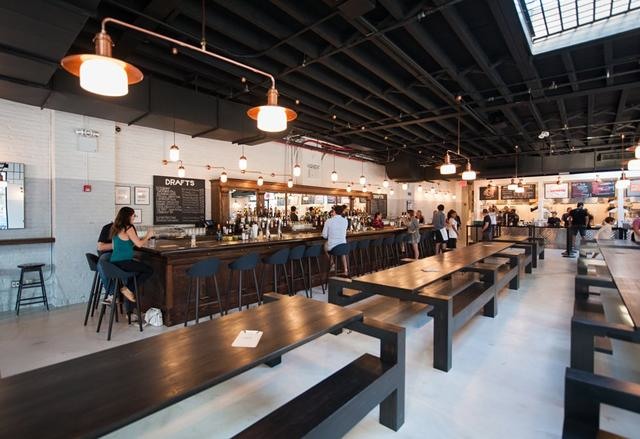 BERG'N It's a tiny bit of a stretch to classify this giant beer-booze-food hall a "bar," but then again, it's not quite a restaurant either. Labels aside, it's definitely a whole lot of fun, boasting huge picnic-style tables for drinking, carousing and card game-playing, as we witnessed on visits to its Crown Heights home. That this space is up for anything is just part of what makes it such a great place to drink away an afternoon.

The Brooklyn Flea team knows how to please a crowd. Carefully curated craft beers and cocktails? Check. Plenty of seating for enjoying said beverages? Check. Delicious Smorgasburg-approved food vendors to keep the party going? Hell yes. Housing a Ramen Burger before ingesting too many Sweet Actions is only slightly less enjoyable than enjoying another one when the drinking's concluded.

THE GILROY The Upper East Side has been slowly transcending its frat boy reputation with drinking dens like Penrose, Jones Wood Foundry and The Gilroy. Bespoke cocktails are the name of the game here, with irreverent twists on classics like the Phils Collins ($14) made with green tea-infused gin, raspberry, lemon, mint and seltzer and Nobody Expects the Spanish Inquisition, with rum, sherry, espresso and a "cardamom tincture." The bar has also carved out a name for itself with the special barrel-aged Negroni program on offer, from a traditional Gilroy Negroni ($14) with gin, Pune e Mes and Campari to a versions made with rye, mezcal and bourbon. 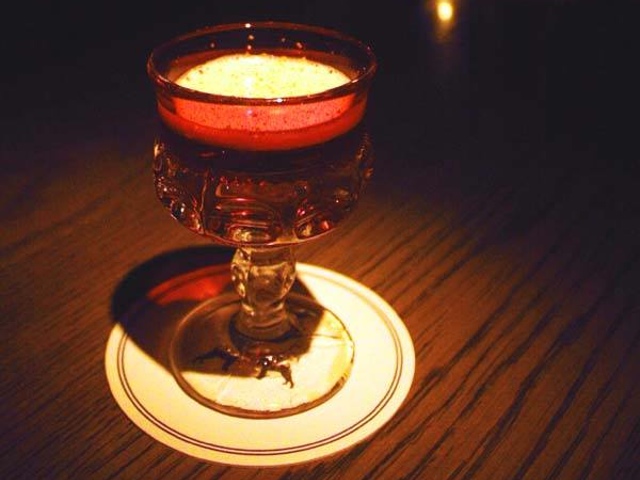 UNDERDOG Nestled in the basement of The Growler on Stone Street, the Underdog has devoted itself to "a collection of cocktails that play second fiddle to their more famous and storied classics". Bartender Derek Brown's menu features 14 lesser known cocktails, like the Matador (tequila, cointreau, pineapple syrup, and lime juice) and the Old Cuban (rum, mint syrup, lime, prosecco, and bitters), as well as three different types of milk punch. The Underdog follows the seasons, with a summer tiki menu (we're still dreaming about the Bal-Boa) giving way to the current apple-themed fall menu that features two legitimately good takes on the typically painful apple martini. (Dan Dickinson) 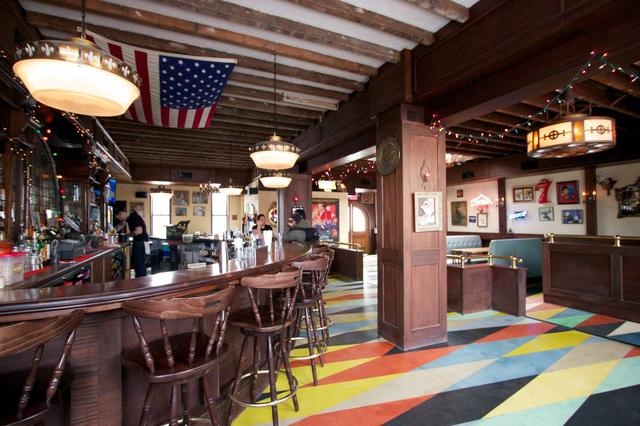 OLD STANLEY'S Bushwick's been at the epicenter of a barsplosion recently, with new drinking holes and fancy gastropubs popping up left and right in the neighborhood. Old Stanley's, which opened up off the Myrtle-Wyckoff L/M stop last spring, is one such new saloon in town. But unlike many of its compatriots, this spot eschews the gimmicks and fancy cocktails, choosing instead to serve its patrons basic beer and peanuts. You know, like a bar.

Stop by for $3-$7 Bronx Pale Ale, Victory Prima and cans of Labatt Blue. Stick around for Pinball, Big Buck Hunter and local sports on TV. No one will try to serve you a $6 dish of olives or a $12 cocktail, though you can score cheap pretzels and hot dogs if you need something to soak up the booze. You will definitely need something to soak up the booze. God bless you, Old Stanley's, even if you won't take plastic. (Rebecca Fishbein)

Old Stanley's is located at 226 Wyckoff Avenue between Menahan and Grove Streets in Bushwick. Cash only. 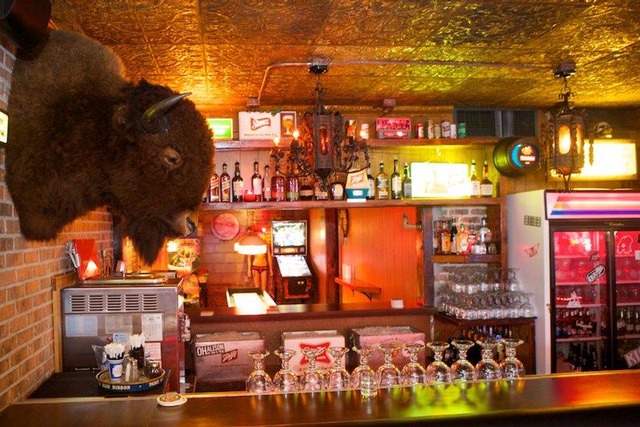 ROCKA ROLLA Stepping into Rocka Rolla is like slipping into your old RATT jean jacket you haven't seen since high school. AC/DC is on the jukebox, vintage illuminated Breweriana signs twirl above your head, and everyone's drinking from Schooner glasses—giant 18 oz goblets that make you feel like the king of beers. You can fill them up with Bud for just $3, or if you're in the market for something more snooty, choose from a heavy-hitting selection of quality craft beers. Rocka Rolla is, after all, brought to you by the beer nerds behind Lucky Dog and Skinny Dennis; the dive aesthetic doesn't mean you have to drink swill from a dirty tap line. They've got Sixpoint and Old Speckled Hen and more obscure craft suds on draught, as well as a concise cocktail menu, but you can also get a 16 oz. Tecate for $5.

"Hair metal is priceless and everyone loves it but no one wants to admit," co-owner Bill Mack told us when he opened the spacious bar in the shadow of the BQE in August. "Let's get back to the real shit. Do a rock bar. AC/DC. Judas Priest. Motley Crue. I wanna open the bar I grew up with." It's also one of the best bars to open in NYC this year. Be sure to check out the back patio, where, come spring, you can line your stomach with burgers and other snacks from a disembodied food truck. (John Del Signore)

Rocka Rolla is located at 486 Metropolitan Avenue in Williamsburg 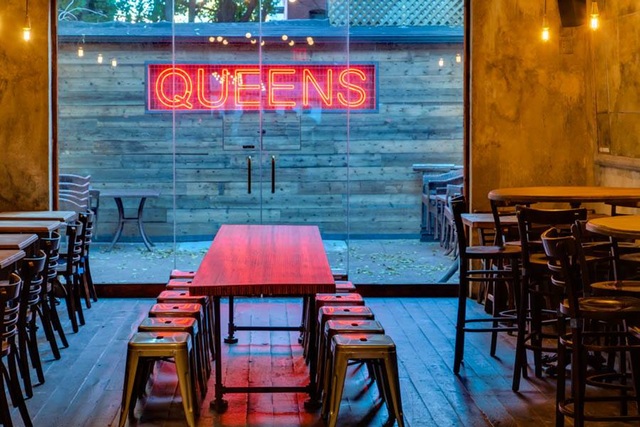 SEKEND SUN If for a moment you should forget where you are, the giant neon sign adorning the back garden of this Astoria cocktail bar will remind you—though you'd be forgiven for thinking you were still in some kind of haute barn. Everywhere you look has been covered in gnarled, unfinished wood, lending a casual vibe to a place shaking up craft cocktails like the Mickey's Late Night Reviver made with gin, fernet branca, lime, ginger. Perhaps best of all, their cocktails are all a very reasonable $10 each. Score one for Queens! 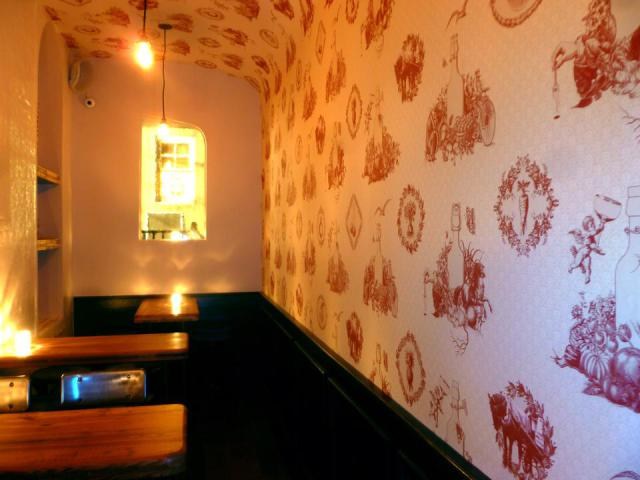 The best, quietest seats in the house.

CONGRESS BAR Congress opened on Court Street in late 2013, a tiny, well-designed bar mostly made of wood and fancy wallpaper. Their cocktails and wine hover around the $10 mark, they've got an impressive Bloody Mary menu ($9), and an even more impressive happy hour (2 to 7 p.m.!). The bar can get loud when it's crowded, but usually the smaller back room (pictured) will offer a quieter setting. Also: this place consistently plays the best music that we've ever heard at a bar. Their one year anniversary party is happening on the 19th, but if you want to check it out, keep in mind that this place is best when it's not packed. (Jen Carlson) 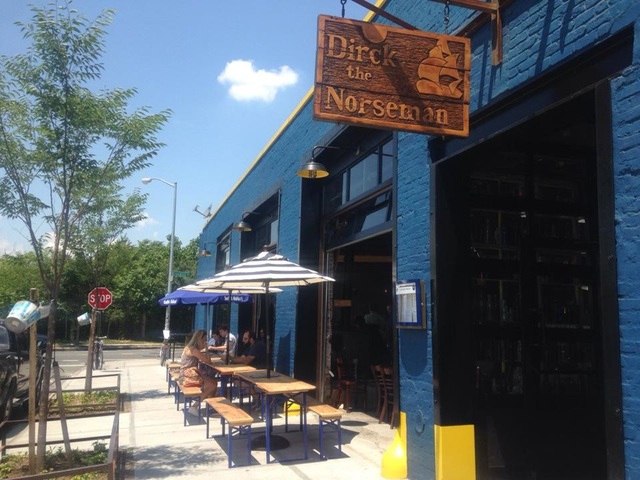 DIRCK THE NORSEMAN Tucked away amidst a sea of red brick warehouses, this Greenpoint brewpub offers a welcome respite from the cold in the winter—that fireplace helps—and a breeze-filled oasis during the summer, making it an exceptional year-round spot for beer drinking and schnitzel-eating. Of their 16 varieties of beer, they offer nine from on-site brewery Greenpoint Beer & Ale Company, like the delicious Polar Opposite session American black ale, an ideal winter warmer. Prices are reasonable, too, starting with a half pint for $3 all the way up to a full liter for $13, making it too easy to try as many beers as possible.

The brewery offers tours on Sundays, which are also an excellent time to bone up on your brews, plus weekly events like trivia and live music. After (or before!) all that beer, fortify yourself with some vaguely German eats, with dishes like Chicken Schnitzel ($12), Dirck Sausage ($10) and Goosefat-Dill Mini Potatoes ($7).

Ed. Note: Because we want to give new bars time to find their footing, we haven't included establishments that opened in the past month on this list. As you saw above with Congress Bar, bars opening in late November/early December will be eligible for inclusion on the following year's list.