The 10 Best Hotel Bars In NYC

Not many stand-alone bars can match the luxuriant sophistication found in a fancy hotel bar, traditionally a glamorous mingling spot for well-heeled travelers and high-end locals (and, of course, hookers!). Pricey cocktails, chic decor, affluent men and prowling cougars are often found in this exotic environment, and though afternoons are generally reserved for quiet, elegant drinking, nights can give way to an electric, Martini-swilling crowd. Here are our favorite hotel bars in the city; as always, leave yours in the comments. 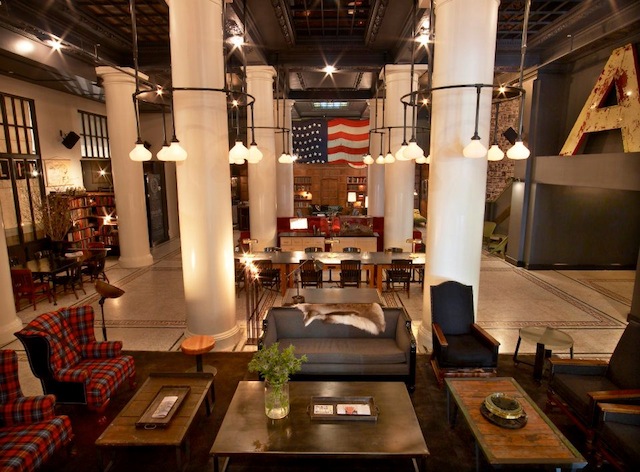 ACE HOTEL: The Ace Hotel is notoriously hip, having turned its strip of 29th Street into a sea of swanky stores, bespoke subs and Stumptown. But the lobby bar is surprisingly unpretentious, catering to a fairly casual Midtown post-work crowd in the rear of the room. Friendly bartenders whip up a number of tasty specialty cocktails; try the citrusy Lust For Life ($14) made with gin, lavender syrup, lemon juice, fresh mint and club soda, or the zesty Pablo Honey ($14), made with tequila, agave nectar and fresh lime juice, grab a seat on one of the bar's plush leather couches and keep your eyes peeled for rock stars and poseurs heading in and out of the hotel. 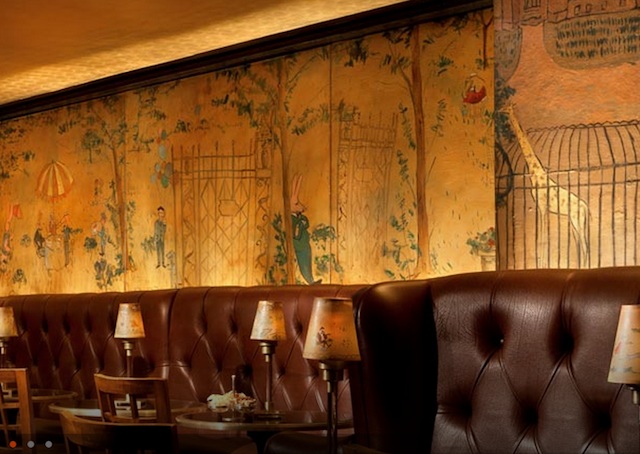 BEMELMANS BAR AT THE CARLYLE: The Carlyle's upscale lounge is one of the city's most celebrated classic spots, with its old-fashioned white-coated waiters, sophisticated cognac drinks and elegant tinkling piano music. Named after Ludwig Bemelmans, a children's author and illustrator known best for his famed Madeline books, the bar boasts beautiful artwork by the man himself on its walls, with parasol-wielding rabbits and strolling giraffes craftily offsetting any hint of self-important stuffiness.

As for the drinks, Bemelmans' menu is all class, from the savory Pisco Sours (Pisco 100, egg white, lemon juice, Angostura bitters and simple syrup) to the heavy Whiskey Smash (Makers Mark bourbon whiskey, muddled mint, muddled lemons, simple syrup). And do be prepared to shell out for the experience: cocktails run about $21 each, with per-person cover charges running $15-$25 on weeknights, and $15-$30 on the weekends.

ANDAZ FIFTH AVE: With its dimly-lit subterranean ambiance, tasty tapas and laid-back crowd, the bar at the Andaz Hotel's Fifth Ave outpost is one of our favorites in midtown (the Wall Street location is also estimable). The bar itself feels more like a very upscale household kitchen than a hotel bar, outfitted with bowls of fruit and funky hanging lights. Bartenders serve up a variety of cocktails ($10-$15) and fine wines, but the real specialties here are the shareable Latin-style small plates. Try the cured meats, with offerings including chorizo and salchichon running $9 a plate, seafood dishes like rock shrimpajillo ($15); also of note are the chorizo-and-manchego cheese croquetas ($9), the empanadas ($13) and the tender house-smoked pork belly ($15). 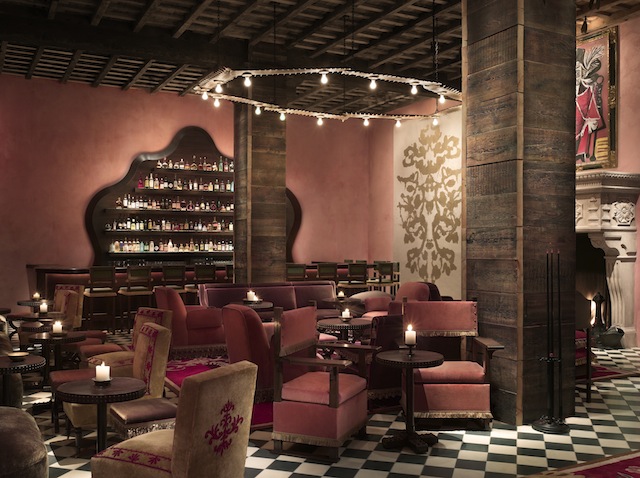 ROSE BAR AT THE GRAMERCY PARK HOTEL: The Gramercy Park Hotel's bar has it all—sumptuous cocktails, attractive waitstaff, a fireplace and hello, pool table. Challenge one of stylish patrons to a billiards match, and sip on a Ginger Fig Martini or Elderflower Smash so smooth not even the $20 price tag will throw you. And if that's not enough to tempt you, artist Julian Schabel had a hand in the bar's creation, and his works adorn the walls, along with a smattering of Warhol, Twombly and Basquiat. Dress to impress, or you won't be allowed to join in on the fun. 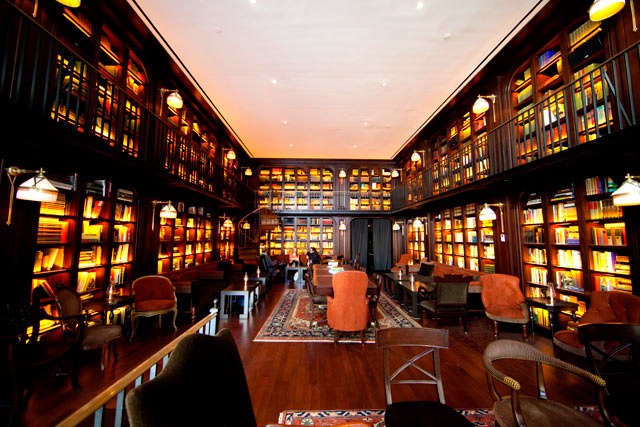 THE LIBRARY BAR AT THE NOMAD HOTEL: You don't have to be a bibliophile to appreciate the NoMad Hotel's spectacular library bar, but if you happen to be one of those people who wander through The Strand just to smell the old books (it's not weird) you might as well just pour yourself a sherry and move in for good. Two levels of bookshelves stacked with real books and journals line the bar from floor-to-ceiling, and leather chairs, small tables, plush couches, Persian carpets and spiraling staircases get the library look down to a T. 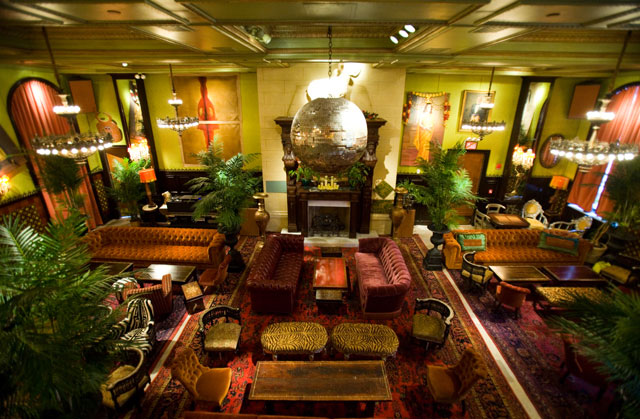 THE JANE HOTEL BALLROOM: Yeah, the Jane is super scene-ey, the bouncers working the door can be pretty unreasonable and the chances of enjoying a high-class cocktail in peace and quiet here are very, very slim. But, hey, sometimes you want to dress up, get sneered at by hot models and jump around on furniture to some Britney Spears tunes and Mo-town hits. And this bar's got everything: big couches and chairs, a disco ball, a giant stuffed ram that stares you down while you get weird, a mezzanine level for dancing and all the inebriated pretty young things you can handle. There's always the chance of a celebrity sighting, and we've heard tell even Harry Styles of One Direction fame has stopped by for a party or two (NO SCREAMING TWEENS ALLOWED). At the Jane, almost anything goes, though don't fall asleep on the furniture—the bouncers will bounce you out, and you won't get to finish that $12 gin-and-tonic you almost spilled on a palm tree by the DJ booth.

The Jane Hotel is located at 113 Jane Street between West Street and Washington Street in the West Village (212-924-6700, thejanenyc.com).

FOURTY FOUR AT THE ROYALTON: This block-long Midtown spot is a sexy throwback to the city's old-school speakeasies and hotel bars, complete with mustached, vest-wearing bartenders serving up your drinks. The bar is dark and quiet (though you may find it slammed on some weeknights), so you can repair to an elegant leather couch by the fireplace and drink in peace.

The cocktail menu has been curated by some of the country's finest mixologists, including Dutch Kills' Richard Boccato and visionaries from Boston, Los Angeles and Miami; try the Eden's Elyxir ($16), made with Absolut Elyx, muddled cucumber, cocchi Americano, yellow chartreuse and celery bitters, or go for the zesty El Maya Verde ($16) made with tequila, house-made cilantro-mint syrup, Cointreau and lime and served in a glass rimmed with brown sugar. 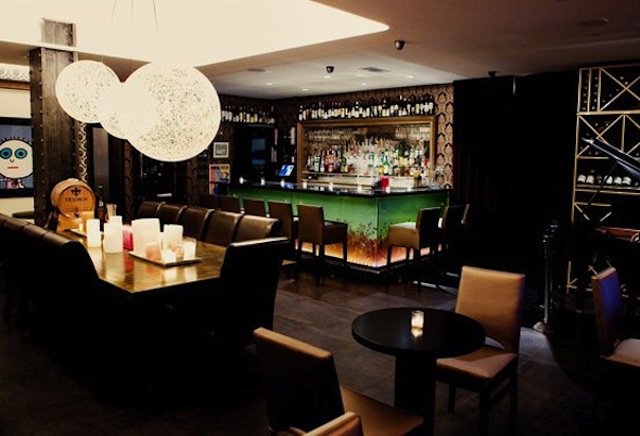 EST. 1986: The shabby Hotel Stanford isn't much to look at, unassumingly squelched in the middle of a busy Koreatown block. But there's no karaoke or ramen cafeteria to be had here: instead, the hotel shelters a surreptitious gem in the form of Est. 1986, a semi-speakeasy wine bar. The bar is small, with only a handful of tables and quiet booths for patrons. But what it lacks in spaciousness it makes up for in selection, with a hefty wine list and solid collection of cocktails. It can get a little cramped around happy hour, where select drinks are 50 percent off from 6 p.m. to 8 p.m., but the crowd thins as the night wears on, leaving lingering drinkers to enjoy their Malbecs in peace. 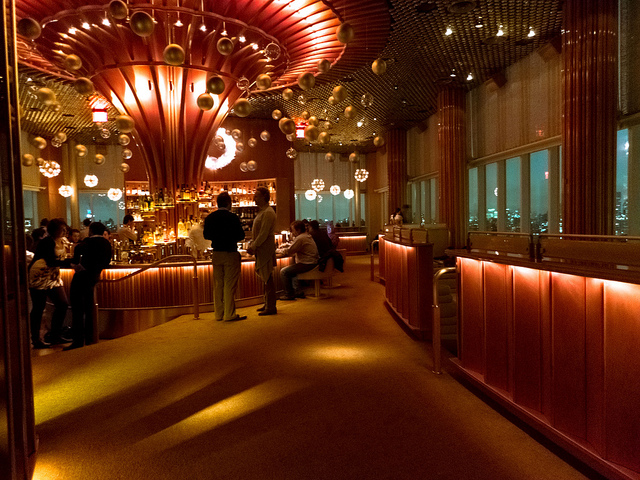 THE TOP OF THE STANDARD Designed by brilliant husband-and-wife design firm Roman and Williams, the top floor of The Standard High Line (formerly known as The Boom Boom Room until an objection from a Las Vegas club with the same name) is a stunning space age lounge with a unique sunken bar and seating areas that offer commanding views of the city. Cocktails, while very good, soar upwards of $15, and the lounge is much more difficult to get into than the funkier Le Bain across the hall. But it's worth trying; the vibe up there is sort of surreal and unworldly. It's usually not a problem getting in if you make a reservation close to when the club opens (check the hotel for times), and it obviously doesn't hurt to dress sharp.

The Standard High Line is located at 848 Washington Street between 13th Street and Little West 12th Street in the Meatpacking District (212-645-4646, standardhotels.com). 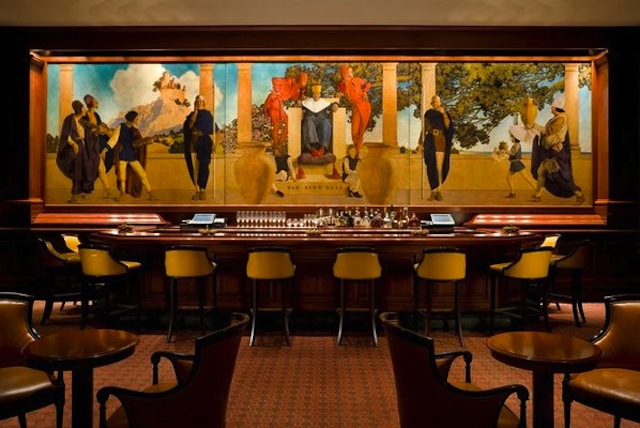 Of course, all this New York hotel finery comes at a hefty price, with signature cocktails running upwards of $20-a-pop. On the bright side, though, you get what you pay for: in addition to the famed, lengthy Bloody Mary list, the bar makes a killer classic martini ($22), has a large collection of high end cognac and serves an assortment of small plates to offset all that schmancy booze. Unfortunately, you'll have to wait a bit to max out your credit card here, since the bar is closed through the end of October for renovations.