Summer is here, the heat is on and the greatest eating competition of the year is almost upon us. So what better time to talk about one of those quintessential New York foods, the hot dog. From street carts to fancy restaurants, New York has quite a few dogs in buns to choose from, but we've narrowed those down to our ten favorites (one of which, yeah, is not in NYC). Take a bite and see if you agree!

Gray's Papaya: One of the granddaddys of NYC cheap eats, both the 72nd Street and the West 8th Street locations of this New York institution are worth the very few pennies it'll cost you for a bit of their fare: Simple, all-beef dogs that won't do you wrong. And the papaya drinks ain't bad, either. We wish the UWS location still had frieds though. [Editor's note: Some people prefer the similar dogs at Papaya King, and that is their prerogative—we just always end up picking Gray's]
Multiple Locations

Crif Dogs: The two locations of this funky wiener hut can serve you a regular old hot dog, sure. But they can also serve you a dog wrapped in bacon with chili, cole slaw and jalapenos (the Spicy Red Neck) or a dog with thinly sliced half-sour pickles and melted cheese (the Sour Cheese Dog) among many options (you know you want sour cream and avocado on your pup). And for that, we are grateful.
Multiple Locations

Asia Dog: Not only does this shop (which also has stands that pop up all over) serve delicious Asian-influenced dogs like the Ginny (kimchi and seaweed flakes, anyone?) but they have beef, chicken and veggie dogs for you to choose from. It isn't the only spot on the list to offer vegetarian dogs, but we'd say they're the best on that front.
66 Kenmare Street // various pop-ups 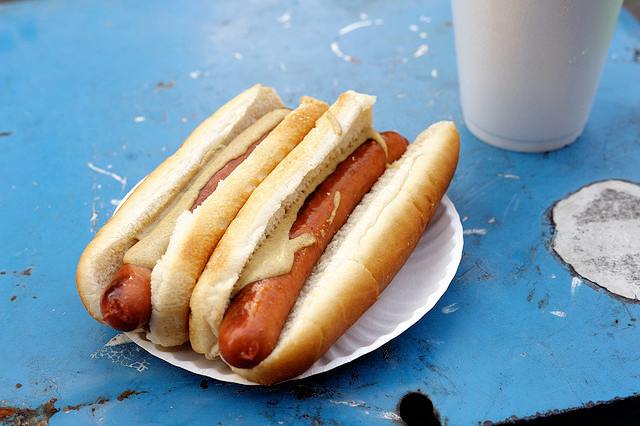 Dogmatic: If a fancy hot dog is what you want, you won't be disappointed at this Union Square joint where the sausage dogs come stuffed in a baguette rather than wrapped in a bun. Don't like beef? Well, they also have turkey, pork, chicken and lamb options. And for the veggies, they're happy to replace the dog with some asparagus. Also, the non-fried baked waffle fries ain't bad!
26 East 17th Street // 212-414-0600

Bark: This fancy dog spot started in Park Slope and now has locations on Pier 6 and the High Line—and with good reason. It advertises itself as "just good food" and that's the truth. The options don't really go too cah-razy, but sometimes basic is all you want. Oh, and the onion rings are great. Plus, beer!
Multiple Locations

Shake Shack: Though the USHG chain is justifiably famous for its burgers (and lines), Shake Shack actually also offers one of the best hot dogs in town, too. Specifically, they offer one of the best Chicago-style hot dogs in town. A Vienna Beef hot dog, poppy seed bun, add some Rick's Picks relish, onion, cucumber, pickle, tomato, sport pepper, celery salt and mustard and there you go. Lunch.
Multiple Locations

Nathan's: For various reasons Nathan's franchised hot dogs just don't hold a candle to the real deal in Coney Island. And that location, which offers up delicious dogs in natural casing, is what we're talking about here. Head to the boardwalk for a bite, stick around for the fun of Coney Island.
1310 Surf Ave // 718-946-2202

Bonus Dog!
Walters Hot Dogs: For nearly a hundred years this quirky shop in Mamaroneck has been serving up delicious dogs in a funky former Chinese restaurant space of the side of a road. The hot dogs are split down the middle here and then are grilled to perfection. Yup, there is often a line, but for good reason! 937 Palmer Avenue, Mamaroneck