The 10 Best Food Trucks In NYC

Though experts warn that the Great Food Truck Bubble of 2011-'13 may have already burst, long lines at lunchtime suggest that vehicular grub is still going strong. And while the Halal Guys will always be the first to win our hearts and stomachs with that mysterious white sauce, there are so many tasty mobile options these days, you could probably go weeks surviving on different food truck fare for each meal. Here are our favorite food trucks in the city; as always, tell us why we're wrong in the comments. 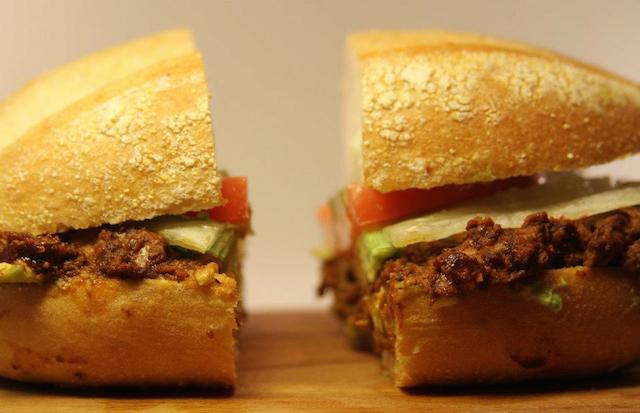 MEXICO BLVD: For a fiery midday meal, this roving restaurant doles out delectable tacos, quesadillas and other Mexican fare. The crispy flautas—three for $7.50, 4 for $8.50—are particularly good, made with your choice of black beans or potato and drenched in three kinds of salsa, cheese and sour cream. The crispy cheese vegetarian quesadillas ($3) are also worth a try, as are the plump tortas ($8), which come with your choice of meat (slow roasted pork, pork tenderloin, chicken or steak) and are loaded with fried cheese, jalapenos and sour cream. Get everything extra-spicy and force the rest of your officemates to suffer. 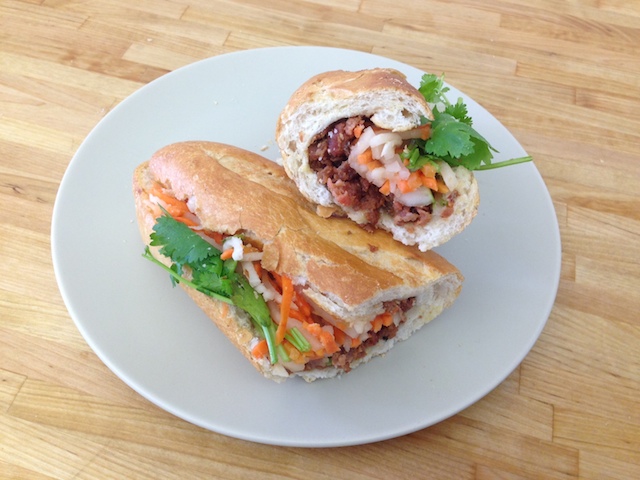 PARIS SANDWICH ON TOUR: Gothamist HQ started feasting on banh mi from this LES Vietnamese bakery's truck earlier this year, and it's since become an office favorite. Thick baguettes baked fresh by the hour ($8) are snugly stuffed with hearty chicken (IT'S THE BEST), pork, meatballs, fried fish or tofu and a large helping of shredded vegetables, all sautéed in a sweet garlicky soy sauce.

You can also score platters of grilled chicken over rice, pork or crispy fish served with pineapple slices and garlic chips ($8-$9), shrimp summer rolls ($5.50) and Vietnamese iced coffee, made with sweetened condensed milk ($4.50), among other goodies. These days the Paris Sandwich truck (okay, technically it's a cart) mostly hangs out under the Manhattan bridge in DUMBO, though they do make weekly journeys to Citigroup to feed Midtown bankers. 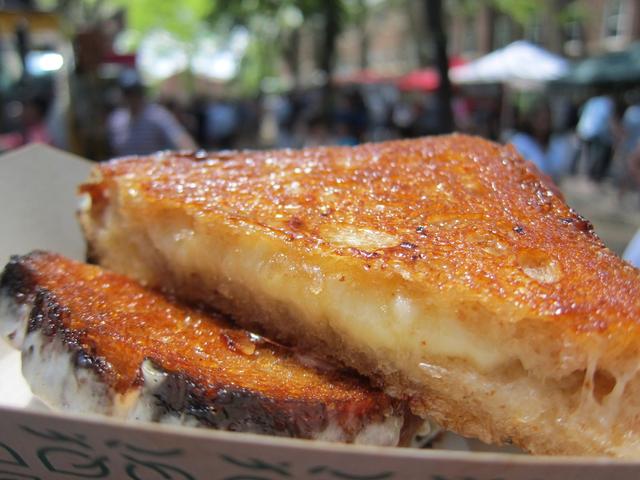 SNOW DAY FOOD TRUCK: This is a food truck with a purpose. First, the Snow Day crew is dedicated to serving maple syrup-themed foods made with ingredients sourced from local farms, like Kinderhook Farm in the Hudson Valley and Red Jacket Orchards in the Finger Lakes region. But beyond the whole sustainable food angle, the truck is run by Drive Change, a New York-based organization that trains and employs formerly incarcerated youth in hopes of helping them find work and keeping them out of prison, elevating Snow Day from a mere mobile eatery to a "vehicle for social justice." 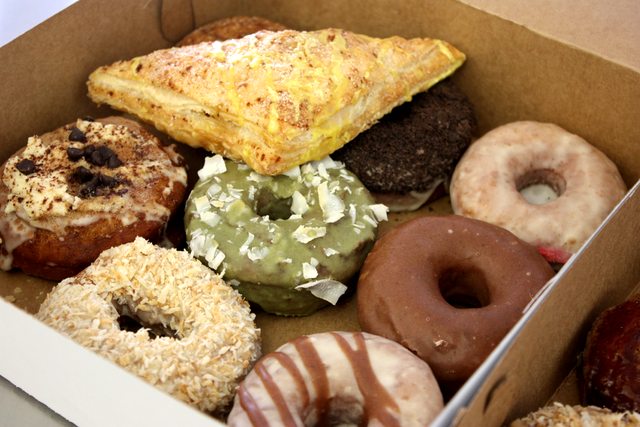 Why do you taunt us so cruelly? (Photo by Jen Carlson/Gothamist)

THE CINNAMON SNAIL: This is a painful one. Though we here at Gothamist HQ adore Cinnamon Snail's vegan fare as much as anyone with functional tastebuds, it has been MONTHS since the truck's deigned to visit us in DUMBO. MONTHS. Every so often, they dangle the fruit in front of us, promising to stop in the neighborhood. But something always goes wrong, leaving us with nary a signature cinnamon bun ($3), organic vegan donut ($2), Seitan al Pastor ($11) or Korean barbeque seitan ($9) in sight. For shame, Cinnamon Snail. For shame. You are delicious, and we want to feast on you every day. Come to DUMBO at once or we start slaughtering goats.

Check out Cinnamon Snail's website or follow them on Twitter to find out when they're in your area next (but they'll never be in DUMBO, don't believe their LIES). 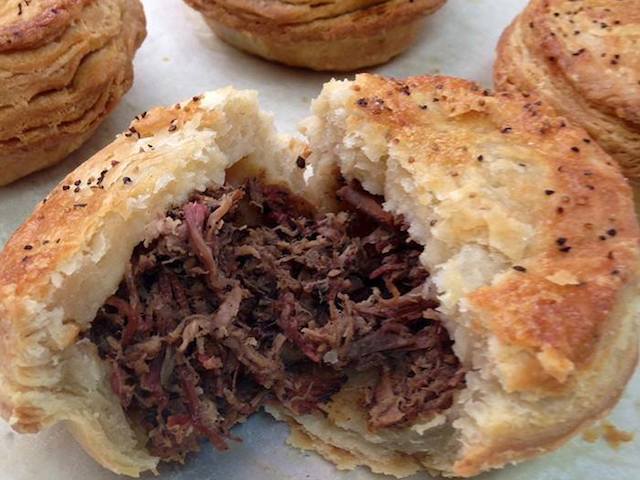 DUB PIES: This Australian/New Zealander (are they not enemies?) transplant doles out savory gourmet meat pies, which sound gross to my uneducated American ears, but they're scrumptious! Rotating pie selections include steak mince & cheese, made with vermont sharp cheddar ($7), Shephard's pie (mince meat and mashed potato, $7.50) and Thai curry chicken pie ($7.50). The pies are small, but dense enough to fill you up in one go, though we won't blame you for stuffing three or twelve of them down your gullet.

If you prefer your meat pie to be a little less mobile, DUB has a brick-and-mortar storefront in Windsor-Terrace. You can also score a flat white—a latte-esque coffee drink from Australia and New Zealand—at both the truck and storefront if you're in need of a jolt. 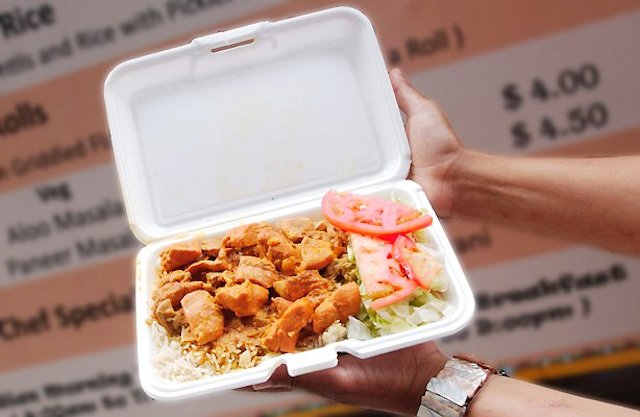 THE DESI FOOD TRUCK: For a healthy dose of midday Indian food, head to SoHo Square Park and clean out the Desi Food Truck. Here, the kati rolls—Calcutta street delicacies comprised of meat, starch and/or vegetables wrapped in a thin stick-shaped paratha—are the real delight, flavorful, grilled and running $5-$6 a pop. You can also score piping hot plates of chicken tikka masala over basmati rice for $6, lentil "dal" stew over rice for $4.50, Haleem meat stew for $4, $6 for a large, and an assortment of daily specials. Douse generiosly with hot sauce if you like your food with a kick.

The Desi Food Truck is located in SoHo Square Park, at 6th Avenue and Spring Street. They've also got a roving truck that shows up to parties and events; follow them on Twitter to find the moving food. 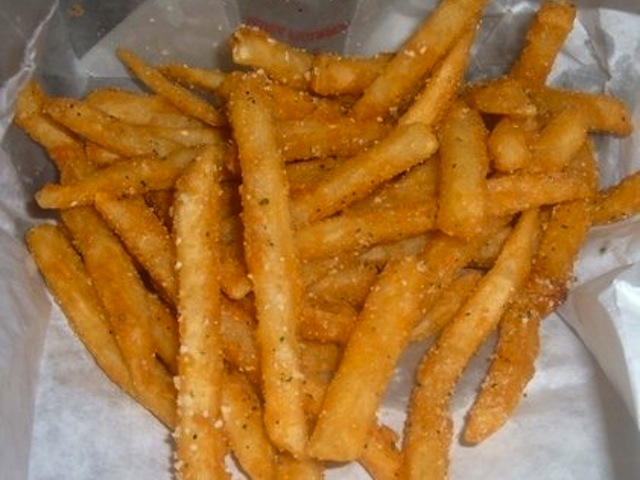 SHORTY'S ON WHEELS: We'll never stop praising this mobile cheesesteak purveyor, which doles out delectably greasy sandwiches (Hoagies? Help us, Philadelphians) stuffed with strips of meat, onions and American cheese whiz. Basic cheesesteaks run $10, but you can spice up your meal with some tasty additions—a $12 steak special, for instance, comes with homemade broccoli rabe and provolone, while a $12.50 Chicken Pizza Steak fills you up with added marinara sauce, pepperoni and provolone. But of course, the best deal at Shorty's is an order of their Italian fries. The $5 fries are double-fried and sprinkled with Romano cheese and Italian herbs, and they will haunt your alcohol-induced fever dreams forever and all time. 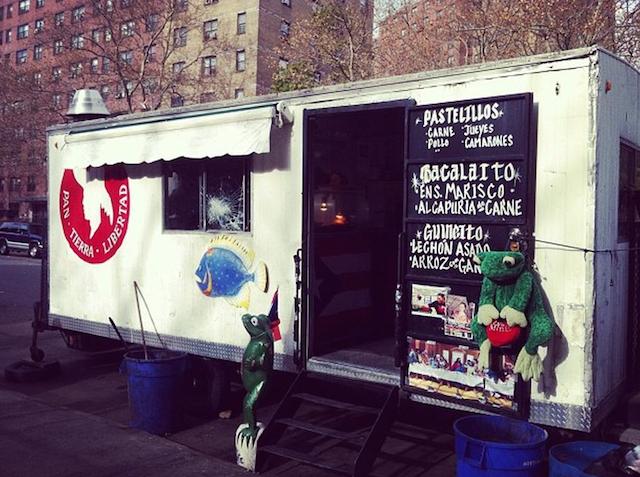 LECHONERA LA PIRAÑA: As the name suggests, this Melrose food truck serves some fierce lechon asado, a Puerto Rican-style roast suckling pig dish. Proprietor and chef Angel only blesses The Bronx with this dish on Saturdays and Sundays, but when he does, it makes for a sumptuous $8 feast—he slices the slow-roasted pork with a machete and sticks the dry-rubbed meat, skin still intact, on a bed of rice and peas. Pork aside, you can sample Angel's pastelillos, or fried empanadas, along with some super-cheap alcapurrias, plantain-based dumplings stuffed with meats.

Lechonera La Piraña is located at East 152nd St. near Wales Ave in The Bronx on Saturdays and Sundays. 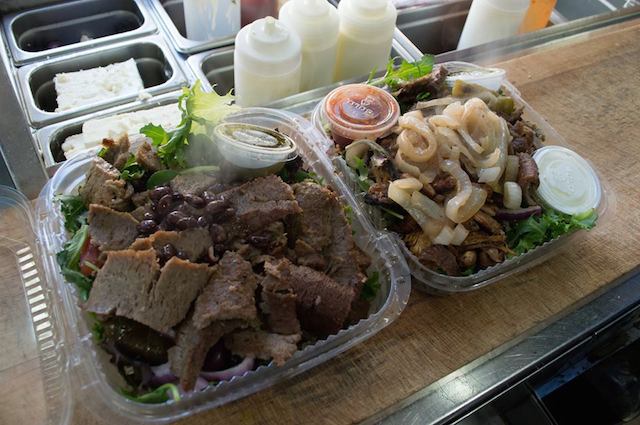 UNCLE GUSSY'S: Though the Halal Guys seem to have cornered the market on midtown lamb lunches, do not overlook this divine Greek food truck, which serves up gyros, meat platters and crispy seasoned fries for a Park Ave crowd. The combo platter ($7) is a particular favorite, boasting big chunks of chicken and lamb gyro over rice; douse with tzatziki and hot sauce and a side of pita ($1.50) for a full, very full, OH GOD I'm too full, meal.

You can also stick with standard pita-wrapped gyros for about $6, and there's a fresh $7 Greek salad on hand if you're someone who eats salad for lunch FOR SHAME. If the meat hasn't done you in, add a side of fries for $3.50 and run up and down Lexington for the rest of your lunch break.

Uncle Gussy's is located at 51st Street and Park Ave in Midtown on weekdays from 10 a.m. to 4 p.m. 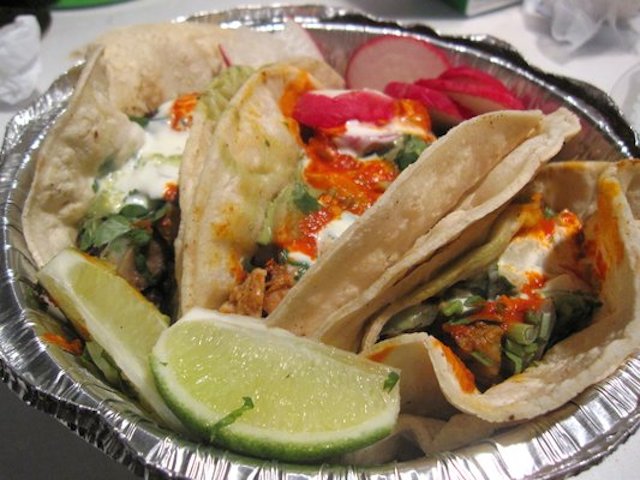 EL REY DEL TACO: This Astoria taco truck earned accolades from us for its stellar burritos last year, but now it's time for us to applaud the whole package. Yes, plump $7 burritos make for ideal late-night drunk food, but ne'er forget the very tacos upon which this spectacular food machine has been founded. The $2 tacos are bursting with meat—chorizo, roast pork, chicken, steak, tongue—cheese, salsas and all the other fixings, and the truck's open until 3 a.m. nightly, so you can stuff food in your mouth all night long. They've also got nachos and huaraches if you're looking for something a little crunchy.