New York has more than its fair share of fine dining establishments, but sometimes nothing heals the soul better than the cheap sandwiches, fries, omelets and around-the-clock banana pancakes served up at a classic NYC greasy spoon. Of course, diners are more than just 24-hour griddle factories; the best ones double as a fading oasis of atavistic 1950s ambiance—one that's being drowned out by chain sub shops and artisanal vegan cheeseburger bistros. We simply don't want to live in a world without old-school staples like rounded coffee counters, shiny stools, leather booths, jukeboxes, prefabricated stone or steel exteriors and black-and-white photos of "famous clientele" hanging on the walls. Luckily, we don't have to (yet). New York's got too many classic diners to account for them all. Here are ten of ours; we know you'll share yours in the comments. 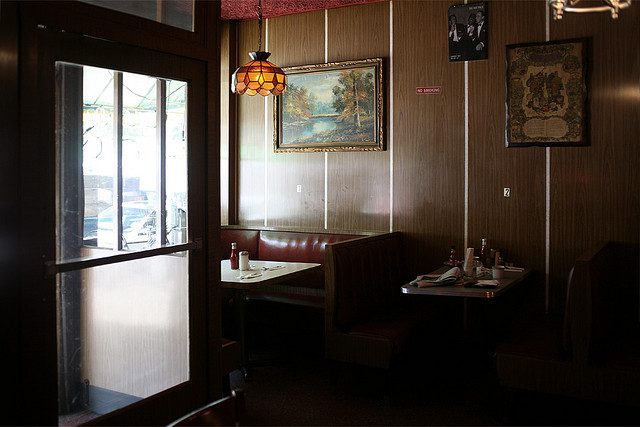 ODESSA: Odessa isn't the sort of place you'd stop by in, say, daylight. But since nothing soaks up $10 for 5 vodka shots at Continental Bar like a plate of cheap pierogi, this East Village eatery is a prime 1 a.m. dining experience. It seems unjust to plug anything other than the dough-ey balls of potato and cheese wonder they serve at all hours—try the sweet potato, meat, cheese, mushroom or spinach for $6.50, a combination of any for $7—but they've also got buttery, greasy omelets and slightly-charred challah french toast sure to satisfy any late-night cholesterol craving. 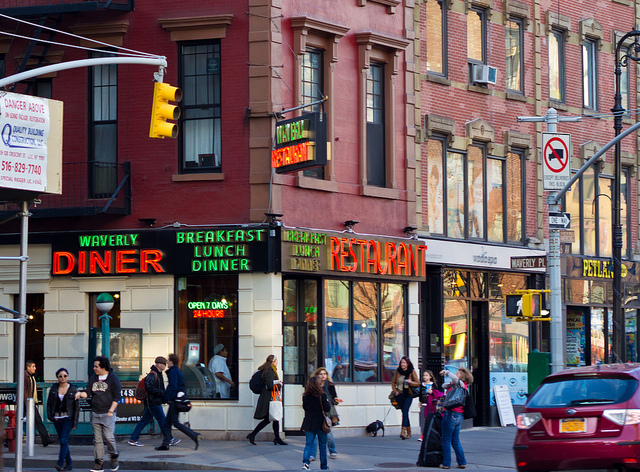 WAVERLY RESTAURANT: Waverly's been a Greenwich Village staple since the '70s, and although a major renovation in 2011 stripped it of some of its rundown charm, the classic slick vinyl booths, yellowed ceiling lights and neon outdoor sign still remain. Waverly's food has never been mind-blowing, but it's still a fun throwback if you find yourself on Sixth Avenue looking for a tuna sandwich and side of fries at an odd hour. Stick with their classic and double-decker sandwiches or a basic omelet with hash-browns, and be sure to take advantage of that bottomless $1.50 coffee, day or night. 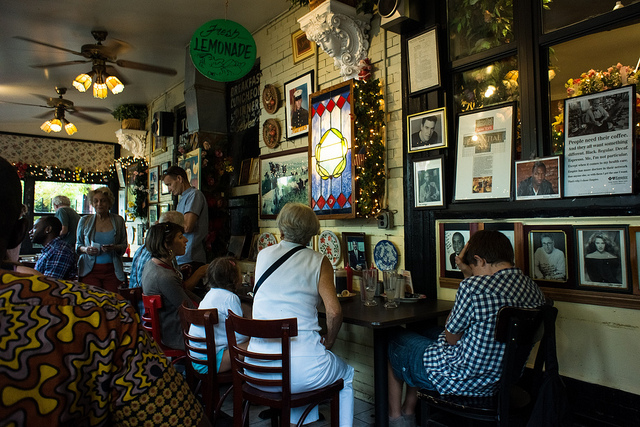 TOM'S: This little faux-flower and Christmas light-filled eatery located right on the Prospect/Crown Heights cusp isn't the place for procuring post bar-crawl curly fries at 3 a.m. The decor and menu are a little more refined than those of its greasy-spooned peers, and it's only open through the early afternoon. But Tom's has earned its reputation as the neighborhood's go-to breakfast spot, serving up fluffy pancakes, creamy milkshakes, eggs and other mouthwatering morning delicacies to hoards of hungry locals daily. Be forewarned: breakfast lines are loooong, especially on weekend mornings. But the food is worth the wait, plus Tom's' employees will feed you free coffee and snacks to keep you from shanking the guy in front of you during a starvation-induced rage blackout.

Tom's is located at 782 Washington Avenue between Sterling and Lincoln Place in Prospect Heights/Crown Heights in Brooklyn (718-636-9738).

VIAND CAFE: The Upper East Side Viand outpost is apparently Mayor Bloomberg's favorite diner, and though it's a little ritzier than some of the late-night pancake and corned beef dives we frequent, it's a clean, comfortable little spot to grab a quick turkey sandwich and some waffle fries. They serve fancier daily specials like Pollo Francese ($19) and veal sorentina ($21), but it's best to stick with the basics. If you're lucky, you might even catch Hizzoner discussing styrofoam's evils with a City Council person over a plate of mozzarella sticks. 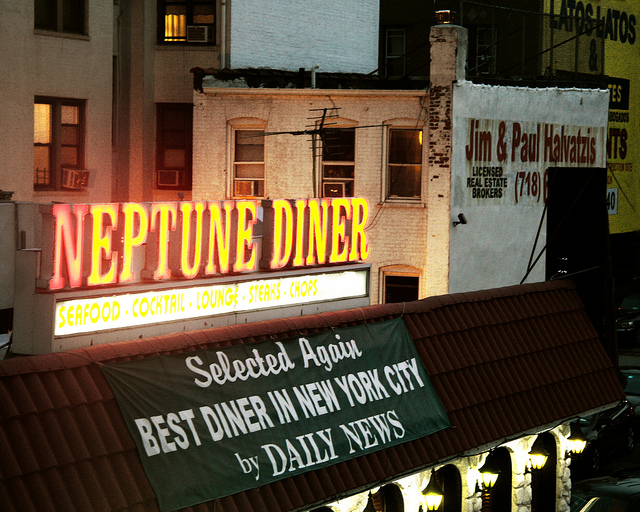 NEPTUNE DINER: Queens is the motherland for good Greek diners, and Neptune is one of the best of the bunch. The Astoria eatery has all the classic diner fixings like a menu that could double as a novella, display cases filled with cakes and pies, old-school clientele and a bowl of hygienically-questionable self-serve soft mints by the register. They serve all the usual diner goods, but they do Greek food best. Try a chicken or lamb gyro for $6 or spring for a big $10 gyro platter with fries, and maybe consider walking home to burn off some of that tzatziki.

MARKET DINER: For the Hells Kitchen crew, this midtown diner serves eggs, hash browns and other greasy-spoon fare around the clock. Market Diner boasts speedy service and engaging, wise-cracking waiters, along with massive hamburgers, fluffy stuffed french toast and no lines to get seated. It's a refuge for neighborhood folks looking for a late-night meal or Midtown office workers who've been released after hours. 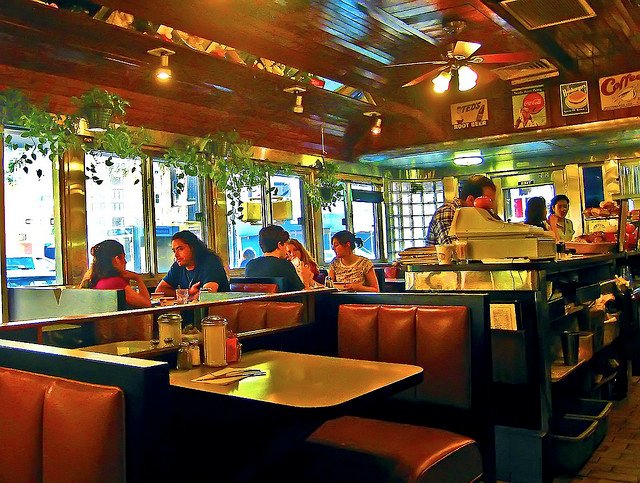 SQUARE DINER: The triangle-shaped Square Diner is an oasis amongst the luxury high-rises and nouveau restaurants of TriBeCa—the '50s greasy spoon vibe, complete with wooden boards inside and the old school sign outside, is the platonic ideal of diners. The burgers are fantastic, their corn beef hash is delectable, the portions are plentiful, and the service is both friendlier and more surly than you'd expect. For a moment, we could imagine we were somewhere near Hyde Park, and not down the block from the Holland Tunnel.—Ben Yakas

TOM'S RESTAURANT: If we're being honest, Tom's Restaurant is not the best diner in the city—the food is edible enough, but isn't particularly exceptional in any way. But Tom's has two or three things going for it over every other establishment on this list. They have the best goddamn thick and creamy milkshakes of any diner in the city—we stop by once every few weeks just to pick up one. Tom's has been around since the 1940's—which means it's one of the longest running family-owned diners still around. Most importantly, Tom's is Monk's Cafe from Seinfeld. Every New Yorker owes it to themselves to visit it at least once just to see the hallowed portrait of Kramer. It's a place Barack Obama and John McCain could agree on.—Ben Yakas 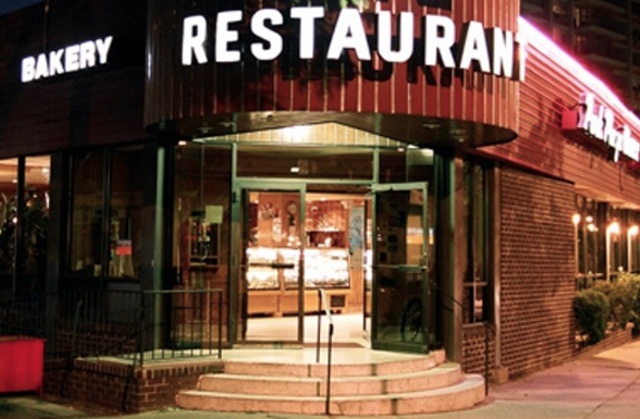 PARK PLAZA: Park Plaza is like the diner you'd find in a suburban strip mall—which is pretty much what you want a diner to be like. The Brooklyn Heights establishment is family owned and operated, and just survived a recent fire. They serve up a huge array of food, 24 hours a day, which you can get delivered, but then you'd miss out on the diner experience. They've got the classic diner bar chairs where you can order up a cup of coffee and a slice of pie, solo style... but they've also got large booths that you and your hangover can disappear right into. If you like your grilled cheese buttered to the perfect level of saturation, and a cheap side of crispy onion rings to go with it, then this is your place. But they've also got seven pages of other items, from soups and salads to grilled chicken to breakfast all day long.—Jen Carlson 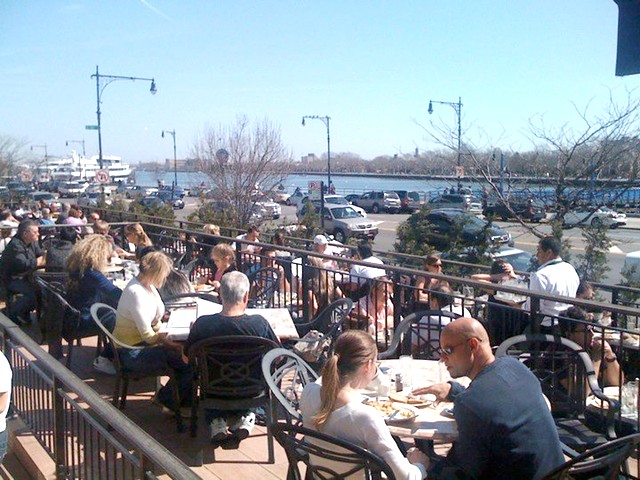 El Greco Diner: Sheepshead Bay's El Greco, open 24/7, has mastered the art of going big. Everything from the menus to the portions to the layout of the restaurant is gigantic, and the prices ain't exactly tiny either. It's not a fancy place, but it's no greasy spoon—El Greco serves a seemingly infinite variety of wraps, deli sandwiches, deluxe sandwiches (try the Fried Jumbo Shrimp sandwich), as well as the traditional diner fare, including a million salads, pastas, Mediterranean specialties and fresh seafood. Seriously, this menu is insane.

The locals (mostly Russian) love it for its variety and reliability, but we've become fond of it for its ample outdoor seating—pleasantly situated by the water—and its ideal summertime location. El Greco, you see, is perfectly situated for hungry cyclists headed back from Fort Tilden or the Rockaways. We're not ambitious enough to bike the entire way home from the beach, but El Greco happens to be just a few blocks away from the B/Q Sheepshead Bay stop. This makes it an ideal dinner pit-stop after a day at the beach—it's about a 20-30 minute ride from Fort Tilden, along bike paths most of the way. Here, we even mapped it for you! Remember to tip your blogger. —John Del Signore

#astoria
#best of gothamist
#brooklyn
#east village
#hell's kitchen
#manhattan
#prospect heights
#queens
#upper east side
#original
Do you know the scoop? Comment below or Send us a Tip