The 10 Best Chocolate Shops In NYC

It's almost Valentine's Day, a holiday meant to shame the single, stress out the committed, and send the plush stuffed bear industry into the black. But it's also a day meant for chocolate, whether you're purchasing a box for a loved one or consuming it whole on your couch while watching Mother, May I Sleep With Danger. Here are the best places to purchase chocolate in the city; as always, leave yours in the comments. 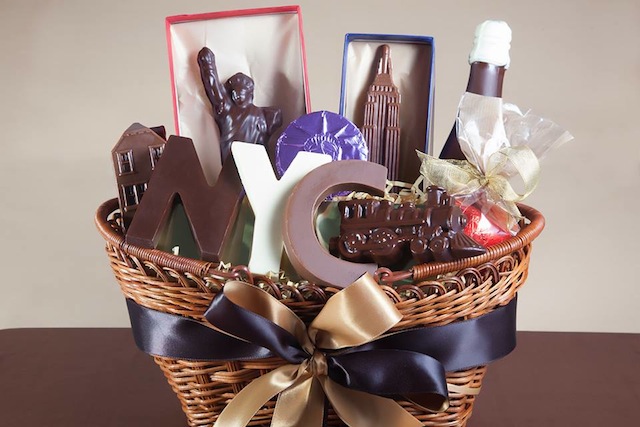 LI-LAC: This 100-year-old chocolate company relocated to the West Village about a decade ago, having been pushed from its old Christopher Street location—they've also since opened factory space in Industry City in Sunset Park. Not that all this shuffling around has done anything to lessen the quality of Li-Lac's tasty confections, with standouts including truffles, fudge, almond bark, and butter crunch candies. Note that chocolate here will cost you a bit more than a box of Russell Stovers, but you're paying for fresh sweets and supporting a New York native to boot.

Li-Lac Chocolates is located at 40 8th Avenue between Jane and West 4th Streets in the West Village (212-924-2280, li-lachocolates.com). They've also got a stall at Grand Central Market and a showroom at their factory in Industry City. 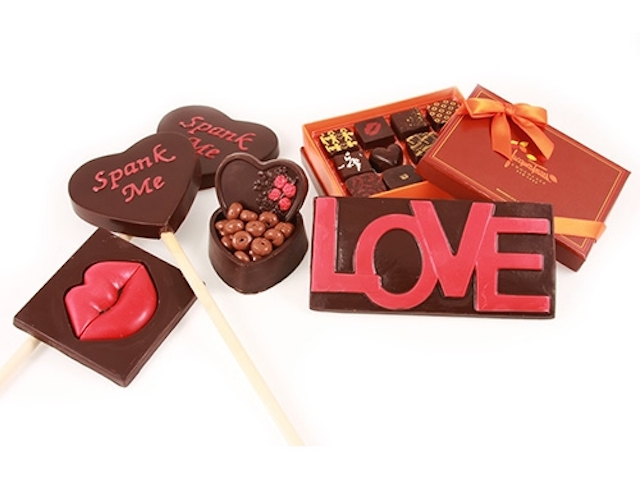 JACQUES TORRES: It's been fifteen years since Jacques Torres opened his first chocolate workshop and boutique in DUMBO, long before Shake Shack moved in. Now, he's got shops in high-and-mighty spots like Rockefeller Center and the Upper West Side, and a DUMBO outpost that doles out scoops of ice cream. Sweet Corn sorbet aside, though, the chocolate's still the real draw here—the champagne truffles, creme brûlée chocolate bar and chocolate-covered macadamia nuts are particularly good, as is the delectable (but very rich!) hot chocolate.

Jacques Torres has a number of locations in Manhattan and one in Brooklyn. Visit their website for details. 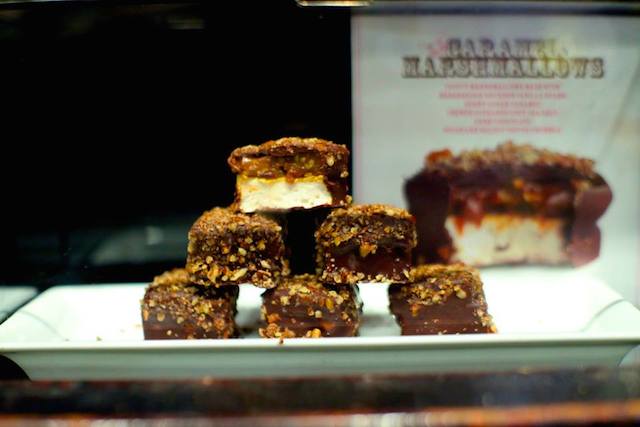 VOSGES HAUT CHOCOLAT: Vosges, which has locations in Chicago, Las Vegas, and Los Angeles in addition to La Belle NYC, is known for creating quirky flavor combinations that work surprisingly well, considering their "exotic" mixology. Take, for example, their Black Pearl truffle, made with ginger, wasabi, dark chocolate, and black sesame seeds; the Budapest truffle is made with Sweet Hungarian paprika and dark chocolate; and the Funk & Disco offering is a combination of banana pudding, vanilla power and milk chocolate. You can also score normal sweets (and bacon bars!) if you prefer to keep things a little simpler. 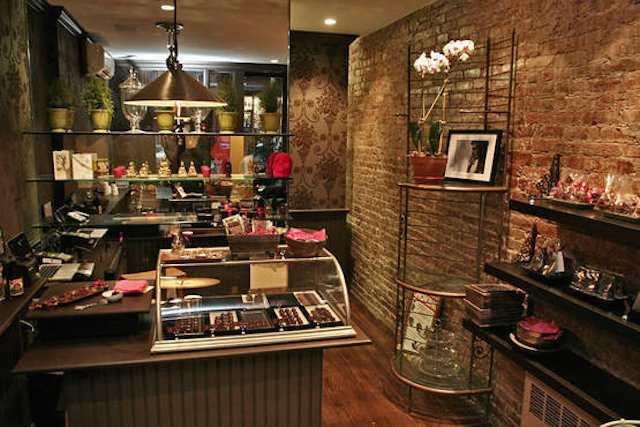 BOND STREET CHOCOLATE: The bon bons whipped up at this adorable little East Village shop—one fashioned more like a tiny, lush jewelry store than a sweet shop—is something to experience, with flavors ranging from typical chocolate and vanilla to elderflower liquer, bourbon, rooibos tea and tequila. Other offerings of note include a spectacular chocolate almond sea salt bar and milk chocolate tiles spiced up with tongue numbing Szechuan peppercorn. If you feel like conflating chocolate with religion, you can also purchase chocolate statuettes of religious figures like Ganesh, Jesus, and Buddha. 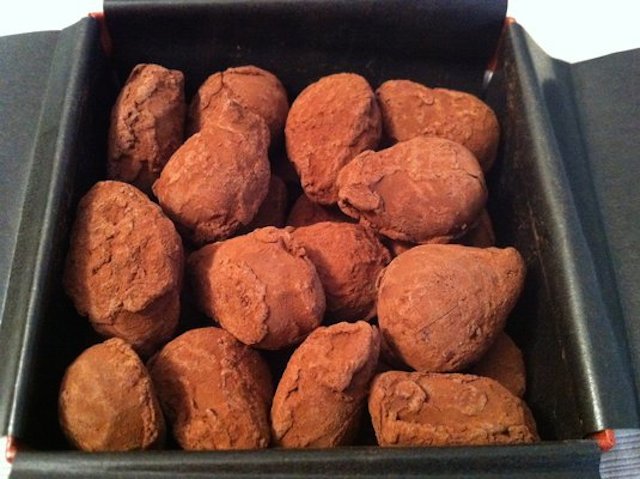 LA MAISON DU CHOCOLAT: This French-based chocolatier is the tippy-tops in fancy dark and milkstuffs, dubbing itself the "creator of legendary chocolates," as it were. Lack of humility aside, Maison du Chocolat is a wonder, whipping up premium sweets in Rockefeller Center and beyond. Champagne cognac truffles, hot chocolate, Bouchée Noix de Coco, chocolate-covered coffee beans, pralines, and macarons are just a sampling of the madness here, though prices will kill you faster than the calories—individual truffles here can run as high as $4, so...be careful when picking out an assortment box.

La Maison du Chocolat has a number of locations in Manhattan. Visit their website for details. 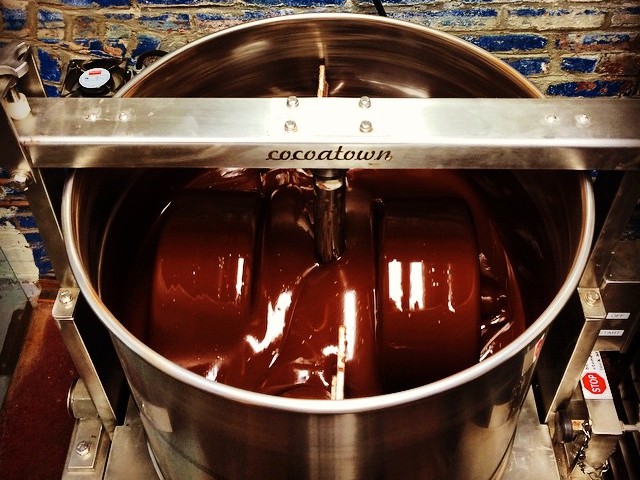 FINE & RAW: It was just another day in Ol' Gentrification Town when this fancy organic chocolate factory opened in disputed East Williamsburg/Bushwick territory, but it turns out Fine & Raw makes a pretty mean chocolate bar. As its name suggests, the chocolate here is raw and toxin free, with cocoa beans sourced from sustainable farmers all over the world. And though chocolate here can tend toward the bitter side, the bars are pretty damn good if you're into your sweets with a bit of a kick—sea salt, ginger, and smoked salt are just a few favorites.

Fine & Raw's factory and store is located at 288 Seigel Street between White and Bogart Streets in East Williamsburshwick, Brooklyn (718-366-3633, fineandraw.com). 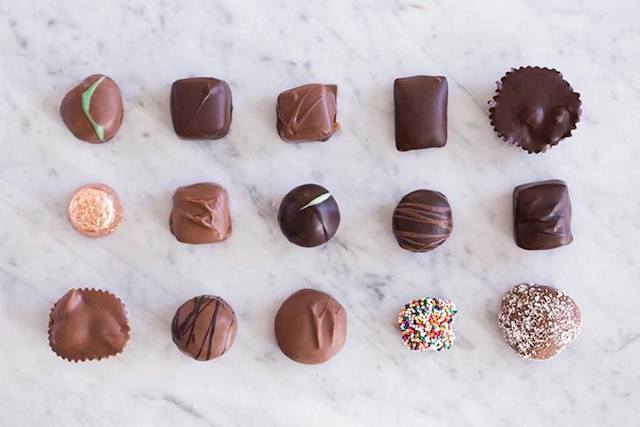 AIGNER CHOCOLATES: 85-year-old Aigner Chocolates is still run by the descendants of John Aigner, who came to the States from Austria and opened a German/Austrian chocolate shop in the 1950s/60s. And they still whip up old-fashioned Saxon sweets, offering everything from Viennese truffles to foiled hens to pistachio marzipan. Aigner doesn't just do chocolate—you can score gummies, coffee and sugar-free goodies too. 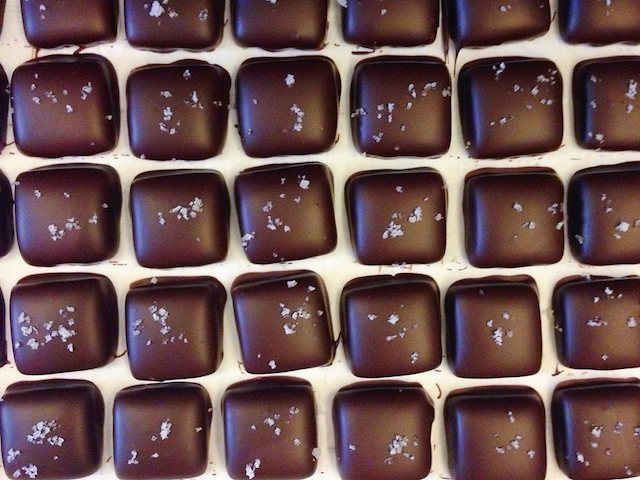 NUNU CHOCOLATES: Justine Pringle named her Boerum Hill shop after a term of endearment for children in her native South Africa, which is appropriate, since the chocolates she and her husband churn up here are indeed little darlings. Chocolate here is all handmade, with cocoa beans imported from a local Colombian farm. They've also got a cafe and "tap room" in Park Slope if you prefer to have your chocolate paired with charcuterie and beer. 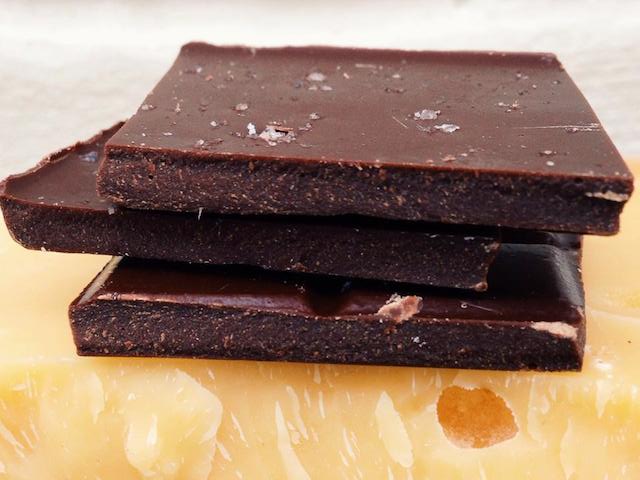 MAST BROTHERS: Mast Brothers is, sadly, the creator of a very expensive chocolate bar, the likes of which you can find in boutique grocery stores with $15/lb salad bars. But, at the very least, these pricey bars are quite delectable, and they're crafted out of the company's factory in Williamsburg. Offerings of note include chocolate sourced from farmers in Peru, Bolivia, and Papua New Guinea, sea salt, cacao nib, and vanilla & smoke; you can also book a tour of the chocolate-making facility for an extra price. 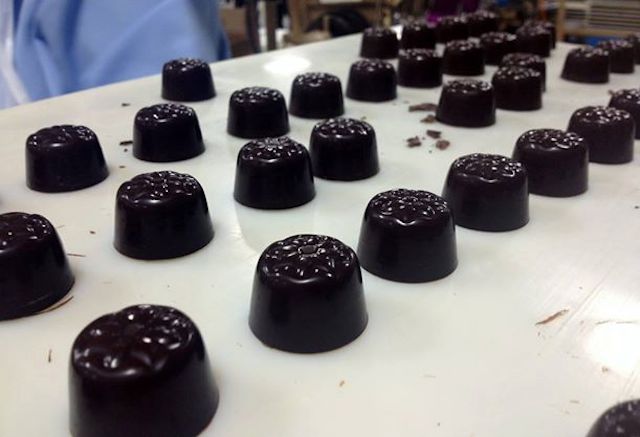 MADELAINE CHOCOLATE COMPANY: We almost lost this Far Rockaway chocolate company when it took a serious beating during Hurricane Sandy, forcing it to consider moving out of the city. But thankfully, Mayor de Blasio supplied it with $13.2 million in recovery funds earlier this year, meaning the Madelaine crew can continue churning out tasty sweets by the beach. Though Madelaine is primarily a factory facility, they do have a shop open at Beach 95th Street, where you can score foil-wrapped butterflies, chocolate cigars, holiday treats, malt balls and more.