That Three-Eyed Catfish From The Gowanus? You'd Better Sit Down

A slimy mutant emerging from the Gowanus canal seems more likely to be real than a "sun-drenched junior one-bedroom no broker fee." But the thing about Blinky is—are you sitting down? That three-eyed catfish seen in a 30-second, contextless video clip sent by a tipster from an AOL email account is almost certainly not real.

The debunking comes from Queens College biology professor Dr. John Waldman, who commented on the original article we ran on Sunday under the headline: "Video: Man Claims He Caught Three-Eyed Fish In Gowanus Canal." 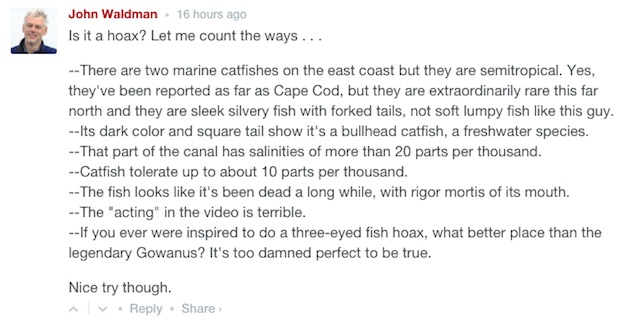 An insightful, expert internet comment on a viral video is a "three-eyed fish," in a way.

Dr. Donald Stewart, who teaches ichthyology at the New York College of Environmental Science and Forestry, tells us that "a mutation to put an eye there is highly unlikely."

Dr. Jeremy Wright, the curator of ichthyology at the New York State Museum, wrote in an email that he believes "it's a hoax, given that the fish in the picture is a Brown Bullhead, which is a freshwater species and thus not something that you’d naturally find in the Gowanus Canal."

The fish in the photograph has obviously been dead for quite some time. The sidewalk underneath it doesn’t even appear to be wet, the barbels (whiskers) have shriveled up, and you can see features of the skull protruding from underneath the skin, which is something that you see in animals that have begun to dry out. While I can’t say for sure what caused the mark on the head of this fish, I’d say it looks artificial - outside of being circular (suspiciously, perfectly so), it doesn’t even really resemble an eye.

The cadre of other ichthyologists contacted for comment on this followup have yet to stop teaching, working, living, to offer their analysis of this viral video clip; other ichthyological exigencies require attention.

The tipster who sent the video (ABC identifies him as Greg Hunter) has yet to respond to our request for comment.

Update: Editor's note: Today, a former blogger for the now-defunct City Room website published a 645-word NY Times article questioning the speed at which this follow-up report was produced by Gothamist. Asked for a response, Gothamist publisher Jake Dobkin said, "I think this guy might have a Troy McClure kind of thing for fish—it’s a little weird."

Update November 11th: Editor's note: The aforementioned NY Times article has been significantly rewritten without explanation, quietly deleting commentary on the sad state of viral video internet journalism, as well as all quotes from Dobkin, including, "I'm glad the NY Times has the resources to investigate the story behind the three-eyed-fish story. We eagerly await their Virtual Reality exposé on the origins of the Pizza Rat video."

The Times also interviewed the man who took the video, who insists, "If it’s a hoax, it’s a hoax on me...I poked it to see if it was real. It looked kind of glossy, kind of like a cataract eye. But it felt like an eye."

#blinky
#ethics in ichthyology journalism
#gowanus canal
#why god
Do you know the scoop? Comment below or Send us a Tip