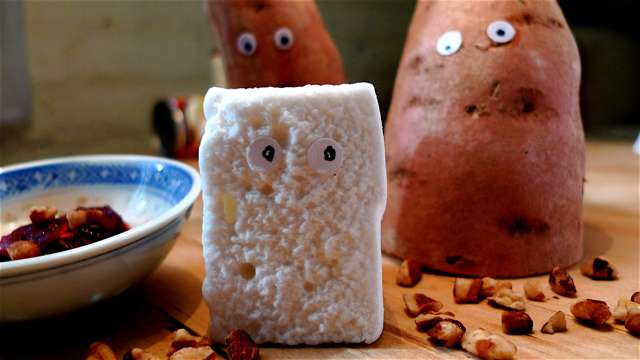 Marshmallow knew what he was getting into when he met the sweet potatoes... for Thanksgiving dinner.
For our second Thanksgiving recipe, we hand you over to Doug Crowell and Ryan Angulo, owner and chef (respectively) of the soon to open Buttermilk Channel in Carroll Gardens. Angulo was most recently chef de cuisine at The Stanton Social and is accustomed to tinkering with American standards— Stanton Social executive chef Chris Santos famously makes Chinese soup dumplings out of French onion soup, and corn dogs out of crab cakes. Ryan Angulo’s recipe included here is a variation on the time-tested and traditional baked-yam-and-marshmallow casserole extravaganza. He says the inclusion coconut milk, chestnuts and cranberries only add depth to the dish.

When Buttermilk Channel opens in a few more weeks, the 60-seat restaurant will feature sausage from G. Esposito & Sons just down the block and an all-American wine list. Angulo will cook bistro food and make charcuterie. Daily specials will include fried chicken and waffles, and bluefish served with cranberry beans and garlic sausage, so don’t expect to see this recipe on the menu. For the finishing touch, Angulo says that making a smiley face with the mini marshmallows on top of the pudding is optional, but very strongly suggested. 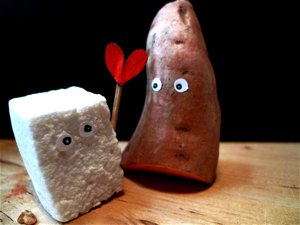 Roast sweet potatoes in their skins until soft. Let cool slightly, peel off skin and whip sweet potato with the coconut milk and salt. Let cool to room temperature. Place chestnuts, orange juice and dried cranberries in a pot and bring to a boil; let cool.

Spread marshmallows in a single layer on a cookie sheet and toast quickly under broiler. Use a silcone baking mat (such as a Silpat) in order to prevent the marshmallows from sticking to the tray. Place alternating layers of sweet potato puree, cranberry/chestnut mixture, crème fraiche, and toasted marshmallows in your favorite glass serving dish. Heat in 375 degree oven until warm, add marshmallows, and broil for 5 minutes at 400 degrees until marshmallows start to brown. Top with orange segments and serve immediately.