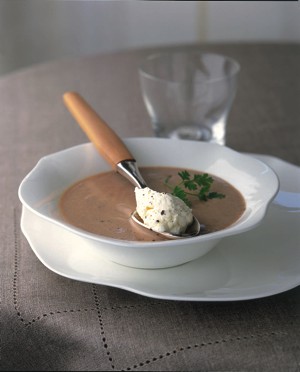 Each day this week we’ll present a different Thanksgiving recipe—the first is for a seasonal chestnut bouillon. It comes from Ducasse Made Simple, a one-two punch cookbook written by a French television chef Sophie Dudemaine, along with French cooking’s main dude, Alain Ducasse, chef-owner of Benoit and Adour.

Much has been written about the seemingly odd theme of this book, which doesn’t so much simplify the Ducasse’s Michelin-starred food as much as radically change its preparations and presentations. No matter, though: in the book you’ll still see a lot of artfully cut small vegetables, plate presentations tricked out with zest or tiny herb petals, and more concentrically symmetric food on the plates than a Busby Berkeley routine.

Ducasse Made Simple also contains a lot of cold weather recipes, like a ham and potato gratin topped with tomato confit, and something called ‘Uncle John’s Fried Pumpkin Purse,’ which is a sort of empanada, Monaco-style. For Thanksgiving, halving the bouillon recipe below will still turn out enough soup for six as long as you cut the serving size down. Serve it in small ceramic mugs or teacups as a pint-sized starter; leave out the chicken if you want. Leave out the whipped cream and substitute homemade ricotta. Just make sure you season to taste.

Fairway sells 15 oz. jars of chestnuts from France for $11.99. Contrary to what you might imagine, the spirit of Ducasse Made Simple is like that of all other cookbooks— you never have to take any recipe literally, though perhaps you should try at least once. The danger of having a master chef plan your menu is that it’s too tempting to take his recipes as exact specifications for happiness of a sort. But gospel doesn’t work too well in the way of food instruction, and recipes are meant to inspire and engage old food memories, and that is how Ducasse Made Simple works best. Otherwise you’ll end up with French chestnuts of a different sort.

In a large stockpot over medium-high heat, combine the butter with the olive oil and heat until the butter is melted and bubbling. Add the chicken and sauté, stirring frequently, until browned, about 10 minutes. Add the shallots, garlic, and chestnuts, stir to combine, then season with a pinch of salt and pepper. Reduce the heat to low, and cook for about 3 minutes, stirring occasionally. Add the cognac and stir well to combine. Add the chicken broth and 1 cup of the cream, and stir to combine. Bring to a boil over high heat, then reduce the heat to low and simmer for 40 minutes. Add the remaining 1 cup of cream, stir to combine, and cook for 20 minutes. Transfer the mixture to a food processor and puree until smooth, working in batches if necessary. Strain through a fine-mesh strainer into a saucepan and keep warm over medium-low heat. Taste and adjust the seasoning.

Pour the hot soup into warmed bowls and add a dollop of the whipped cream in the center of each bowl. Decorate with a few leaves of chervil and serve immediately.