Embrace your inner food snob and hop aboard Yelp's International Food Crawl on Friday night. Starting at 7 p.m., join a group of intrepid diners out in Jackson Heights, Queens, as they take in food truck fare that includes cuisines from Tibet, Mexico, Bangladesh, Korea and more; they're even hoping for an appearance by the beloved Arepa Lady. Depending on what you order, expect a tab between $15 and $20 (plus your subway fare, of course). You'll need to be a member of Yelp to join in the fun, so while you're at it you may as well burn that hipster watering hole that once sneered at your drink order.

Brooklyn's diverse culinary landscape gets immortalized in a brand new cookbook by Sara Zom, a New York-based food editor, called Brooklyn Chef's Table: Extraordinary Recipes from Coney Island to Brooklyn Heights. In celebration of the book, Zom gathers contributors and chefs from Ovenly, Arancini Bros, Anella and Fletcher's to share stories, recipes and some tasty bites as well. Nosh on hazelnut cookies, rice balls, homemade burrata and BBQ chicken with Brooklyn white sauce then pick up a copy of the book for signing by the folks on hand. They'll be set up at Smorgasburg on Saturday from 12:30 to 3:30 p.m.; copies of the as-yet-released book go for $25 but all the bites are free. 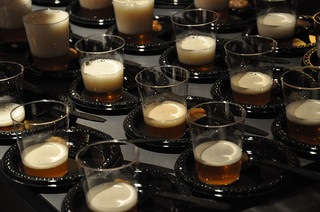 If you're maintaining a liquid diet in advance of next week's competitive eating holiday, you'd do well to check out the NYC Craft Beer Festival Winter Harvest, which takes over the massive Lexington Avenue Armory on Saturday and Sunday. They've got a killer lineup for this go around, including beloved Texas brewery Shiner, who are bringing their "Holiday Cheer" brew; Brewrey Ommegang with their latest Game of Thrones beer "Take The Black;" plus lots of hyper local breweries like Harlem Brewing Co and Bronx Brewery. It's a very, very big lineup. One of the Saturday sessions has already sold out, but $55 tickets are still available for Saturday and Sunday afternoon beer adventures.

Get ready for a world of wieners this Sunday at 2 p.m. at the Bell House, where the venue is putting on Sausage Fest 2013. This totally tubular food fest brings offerings from profesh and amateur footlong fanatics looking to be the "best of the wurst." In a frenzy for franks? Loony for links? Then grab your meat$20 ticket, brat!

#weekend food events
#weekend food roundup
#what to do this weekend
Do you know the scoop? Comment below or Send us a Tip