Thanksgiving Options For The Vegetarian: From Tofurkey To Take-Out

November is National Vegan Month, so it's only fitting that we offer up some Thanksgiving options for those who don't eat meat. Suggestions for eating in, ordering in, and dining out are below. (And for the carnivorous, here's our previous roundup on where to dine on Thanksgiving, how to cook the bird, and tips for throwing your own cheap and lowbrow Thanksgiving party.) 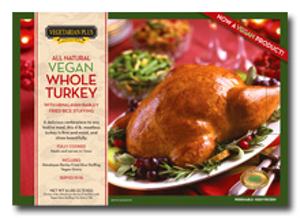 The "Turkey: Fresh Direct has the entire Tofurky Feast for just $24.99. It includes the Tofurky roast, eight cranberry apple potato dumplings, giblet gravy, herbed stuffing, and a Tofurky Jurky Wishstix (which is just like a wishbone but with 100% less animal cruelty).

You can also get just the roast at local stores for around $13.99—you can find a store that carries the product right here. Wanna try something new? VegNews has tried just about every other fake turkey option out there, if you want options... though they don't include this amazing Vegan Whole Turkey!

The Sides Fresh Direct is still accepting orders for pre-Thanksgiving delivery, and they've even got vegetarians covered, with this hearty list of veggie recipes—including an alternative to Tofurkey: Sweet Potato, Caramelized Onion, and Butternut Squash Lasagna.

And once again, the NY Times is offering up an outstanding selection of vegetarian recipes for Thanksgiving. 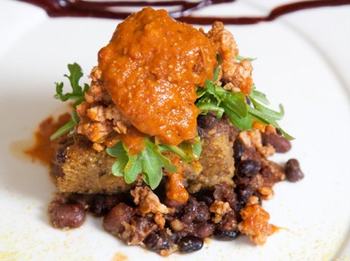 Our soon to be new favorite food truck, The Cinnamon Snail (which will be on New York City turf soon), is serving up an amazing Thanksgiving menu, and you can still get in on the action—the deadline for orders is TONIGHT. Check out the options, which includes Rosemanry Hempseed Crusted Seitan and Sage Marinated Kale, here—there are even Thanksgiving donuts!

Just want dessert? Babycakes (248 Broome Street) is the place to go. They've got everything from cornbread to apple pie... all vegan-style. Their full menu is right here.

Candle79 (154 East 79th Street) is the place to go if you're a vegetarian looking to feast on Thanksgiving day. Their menu includes Saffron & Wild Mushroom Ravioli, Orange Glazed Tempeh, Pumpkin Cheesecake, and more. The prix fixe meal is $75, and includes an appetizer, soup or salad, entree, and dessert.

Angelica Kitchen (300 East 12th Street) has a five course prix fixe for $55 (menu is on the second page of this PDF), and as a bonus, it's BYOB! They're taking reservations, and also offering a take-out option if you want to pretend you made that Cauliflower Celery Root Soufflé yourself.

#thanksgiving
#vegan
#vegetarian
Do you know the scoop? Comment below or Send us a Tip