THE VIBE
The Handpulled Noodle, which opened about two weeks ago in Harlem's Hamilton Heights, is a seven-stool Chinese spot that has the locals swooning. Seriously, I spent an early-evening hour there last week, wolfing as much of the menu as I could, and I have never heard such non-stop effusiveness and gratitude from diners and passers-by about a new restaurant in the neighborhood. Some people were on their second and third meals already! 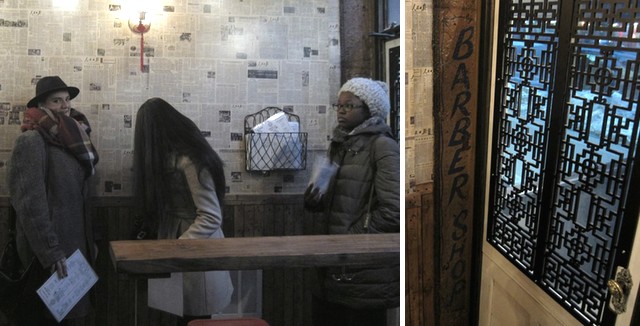 The design aesthetic here is very Brooklyn, with its reclaimed-looking wood, hanging lamps made from "upcycled chicken feeders," preserved vintage signage, and cheeky "pull my noodle" jokes. The same vibe can be found at nearby cafe The Chipped Cup, and faux dive bar The Wallace. Hamilton Heights: the New Whatever!

THE BITES
The Handpulled Noodle menu calls its dishes "North Western Chinese Soul Food," and if you've ever eaten at a Xi'an Famous Foods, you know exactly what that means. There is more of a create-your-own-adventure thing going on here though, so for my first bowl I paired their Ribbon Noodles (which are the wide ones) with the Spicy Cumin Lamb, and for my second bowl I got the Lagman Noodles (which are, as the counter guy said, "like spaghetti"), plopped into some Tingly Spicy Mutton Soup.

All the ingredients were good—the lamb, especially, had that biting, explosive funk you're looking for, and the soup delivered on the spicy, if not really the tingly, department—but in both cases the noodles fell a bit too far onto the gummy side of things, and weren't really integrated into their "pairing style." Not sure how they pull this off at Xi'an, but they do. Still, you definitely wouldn't be sad if you got either of these dishes for dinner or drunk food on some random Tuesday night.

The Handpulled Noodle also has some potsticker-style dumplings—I went with the Beef & Daikon, which was tasty and greasy and stood up to both the black vinegar and the red chili dip they hand out with everything. They've also got a choice of four salads, of which I wholeheartedly endorse the Cucumber and Wood Ear Mushroom, which has a nice crunch to it. Coming soon: Liang Pi, and Chicken Heart Sticks.

THE VERDICT
There's no way not to compare this place to Xi'an Famous, and if you live, say, near the Upper West Side outpost of that excellent noodle chainlet, there's no need to hop on the 1 train up to Hamilton Heights for Handpulled. But the food is solid, everyone's really friendly, and I know I would eat here at least once a week if it were my neighborhood joint.

The Handpulled Noodle is located on Broadway between 148th and 149th Streets, and for now is open Tuesday through Sunday, 4 to 11 p.m., "subject to change" as they figure things out.