It appears today's youths are innovating the dine-and-ditch model of generations' past, abandoning the simple "fleeing" tactic in favor of more daring, theatrical approaches. This past weekend, a young man told a Park Slope burger restaurant he was an "NYPD informant" to get out of paying his bill. The future looks bright, people.

Burger Village on 7th Avenue was the scene of the charade over the weekend. Manager Nick Yadav originally told the story to Here's Park Slope, saying an individual ordered a burger, french fries, onion rings and two beers at the bar around 4 p.m. Things only took a bizarre turn when the diner was handed his check; Yadav laid out the scene for us via phone this afternoon:

We gave him the check and he asked for a pen. We gave him a pen and he started writing something; I thought probably he would either write a complaint or a compliment. But he just handed it to me and I saw there was no money, no card, so I asked him, 'Do you need to settle this?' And he said, 'Did you read what I wrote there?' Then I flipped it over and I saw he has a whole note that he's an informant for the NYPD and it's up to [the restaurant] to call [the police]. 'We are busting businesses who are serving alcohol to minors and you just served two drinks to a minor.'

"I didn't realize he was talking about himself," Yadav says. "Because he was a grown-up man." 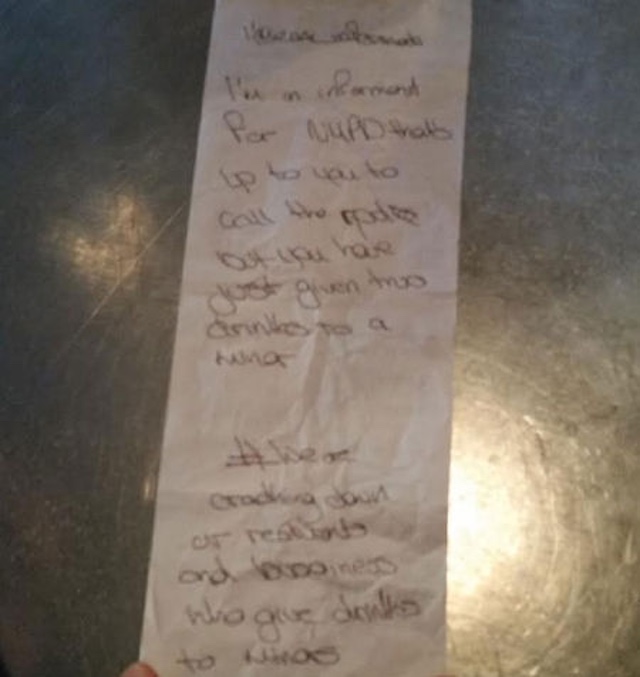 The grifter couldn't produce any form of identification or badge and wouldn't give Yadav his date of birth. He then retreated into the bathroom, where he stayed for nearly 20 minutes while Yadav called the cops. The police questioned him and eventually arrested him; the NYPD confirms that 19-year-old Jyshae Wiley was arrested for "failure to pay service."

"I didn't realize he was [underage]," Yadav insists when asked about the incident this afternoon. "We usually take IDs but he was a grown-up man. I still doubt that he was [underage]. He didn't look like he was less than 21 years of age." That's just what The Man wants you to believe.