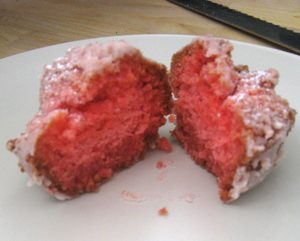 Today the East Village vegan-friendly spot Cowgirl's Baking announced via Twitter: "Our deep-fried Kool-Aid sold out instantly yesterday! We just made a new batch! Come and get it!" Since we do everything that Twitter tells us to, we went right over there and picked up six balls, at $1 a pop.

At first bite the fried Kool-Aid simply tastes like a pretty good doughnut... but then as the hot pink center begins to reveal its own flavors, things change—it's like a sneak attack on the senses. Here's what the staff at Gothamist HQ was overheard saying upon the taste test (it's worth noting, however, that people went back for seconds, and the plate is now empty):

Fried Kool-Aid was the latest fair fare to send the press into a frenzy last month—and of course, it got Americans mocked from overseas. The Daily Mail noted: "America's latest food craze sets the clock back a thousand years" in healthy eating. But what if they're vegan?

#cowgirl's baking
#deep fried kool-aid
#frankenfood
#Kool Aid
#taste test
Do you know the scoop? Comment below or Send us a Tip