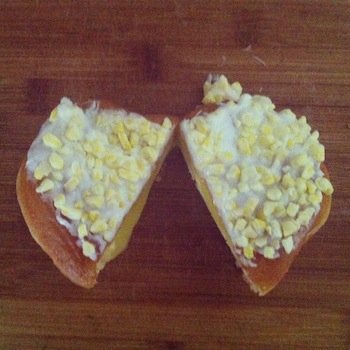 This summer Dunkin' Donuts unveiled two seasonal doughnut varieties: Lemonade and Key Lime. While I am not much of a doughnut person, the journalist in me screamed for Truth, and I tried the 99-cent Lemonade version so you wouldn't have to.

The doughnut features "a yeast shell filled with lemon flavored filling, frosted with white icing and topped with lemonade bark"... and about 100 different ingredients you can't pronounce.

In my opinion, if you are going to shovel some sweet, empty calories into your mouth, you should spend a little more and get something from Dough, or Doughnut Plant, or Dunwell Doughnuts, who all excel at not just standard treats, but specialty items as well (the latter had a Lemon Lavender doughnut a few days ago, which definitely had more natural ingredients in it than Dunkin's Lemonade).

But, if you do pick up one of these with your iced coffee (Dunkies has The Best Iced Coffee, so stay tuned for my 6,000-word think piece, tentatively titled "D'iced To Meet You") here's what you're in for. It basically tastes like the lemonade you made as a kid—not some fancy artisanal hibiscus-infused Brooklyn lemonade, but the powdered Crystal Light/Country Time lemonade of our youth. The frosting is sugary in the way that grocery store containers of frosting are sugary. The filling is almost less lemony than the topping, but still has a lemon flavor to it, which is actually nicely balanced out by the dough itself.

I can't quite peg what the "lemonade bark" is made of, but it seems like hardened clumps of yellow-dyed sugar, which is nothing like that down-home lemonade bark that little kids sell in a cul-de-sac for 10 cents a sheath.

Overall, it's not a terrible doughnut if you accept that it's from Dunkin Donuts. But if you are used to only putting natural ingredients into your temple, you might feel a little ill after eating just half of it.

#doughnut
#doughnuts
#dunkin' donuts
#lemonade doughnut
#taste test
#original
Do you know the scoop? Comment below or Send us a Tip