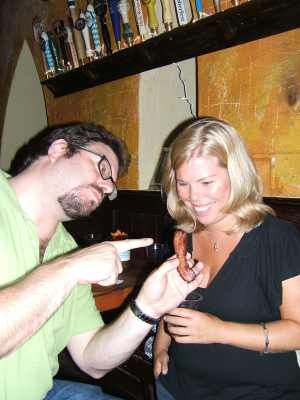 When meat maven Josh Ozersky, aka Mr. Cutlets, talks bacon, many a New York City carnivore listens. And Gothamist is no exception.

Despite Monday's dreary weather, we trudged over to East Village gastropub Jimmy's No.43, for what our favorite meathead was billing as a night of bacon, beer and pickles, a combination sure to brighten any rainy day. Some 25 pounds of cured pork belly were cooked up that night in the subterranean space. Five varieties of bacon were paired with beers from Sixpoint Craft Ales and a selection of pickles from Rick's Picks. There was even some last-minute contraband bacon. As if all this weren't enough, there was bacon-flavored dessert on hand. A gal who snagged a Vosges Mo's Bacon Bar at the Fancy Food Show was gracious enough to offer us what is certainly the best bacon-flavored chocolate we've ever tasted. 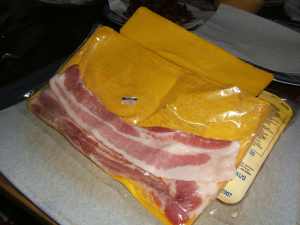 All six bacons served were from local purveyors. Ozersky kicked off the bacon bash with a benchmark bacon by which to judge all the others against. None other than Oscar Mayer, which most of us grew up with. As our gracious host pointed out, "What's more local than the supermarket." Paired with Brownstone brown ale, these rashers were, as we expected, just so-so.

Next up was the supersmoky Dines Farms bacon, which was a good match for the rye-based Righteous Ale. The third bacon, High Hope Hogs, was one of our favorites. The Otis oatmeal stout went down quite smoothly with this bacon and compensated for its relative lack of smokiness. Ozersky noted that everyone was kvelling over this bacon because of its "porky character," a comment that struck as amusingly self-referential at the time. Fourth was Flying Pigs Farm Belly Bacon, which ran a close second to High Hope. The cask-conditioned Black Market porter that accompanied it was pretty tasty too.

Ozersky's one of the only people we know who holds forth on bacon by exclaiming, "So dig it ," which is how he introduced Violet Hill's butt bacon. Gothamist certainly did not dig this bacon. For one thing it's not even made from pork belly and has a relatively light cure. Butt bacon is from not from the pigs rump, but rather its shoulder. All of which made for a dense, salty product that was like pastrami, but without any of that deli meat's juiciness. 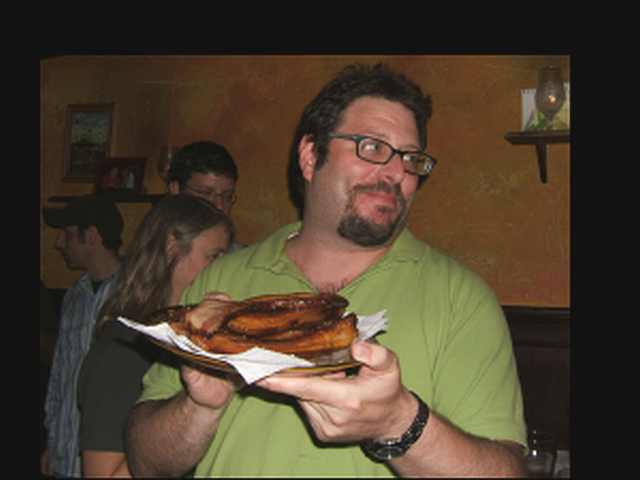 The last-minute contraband set everything right in our bacon universe, though. What you see Mr. Cutlets holding here like a proud father is none other than R.U.B.'s house-cured bacon. The insanely flavorful pork product is made from Berkshire pork belly that's cold-smoked twice and hot-smoked once. It had emerged from the restaurant's hickory-fueled smoker scant hours earlier only to be ferried over by R.U.B.s owner, Andrew Fischel. "For my money, if I'm eating bacon, I want hickory," Ozersky exclaimed. Gothamist couldn't agree more.