Our latest installment of Quick Bites brings us to Red Hook for margaritas and tacos.

THE VIBE
Red Hook has always seemed to have more than its fair share of first-rate dive bars, but even so, when Bait & Tackle shut down about a year ago it was tough for the locals to lose one of their favorite "living rooms." Unlike most of these sorts of New York stories though, there's a happy turn of events here, as the appealingly scruffy and instantly comfortable San Pedro Inn opened in the same corner spot a couple of weeks ago.

Gone are Bait and Tackle's taxidermy treasures and year-round Christmas lights, and in their place are... a thousand other things. The decor—chaotic, nostalgic, rude, funny—reads as if it's been layered on the walls over the course of a drunken decade, but of course the whole thing came together as a piece. In fact, San Pedro is kind of an art installation come to life, and much of the creative inspiration and actual objects emerged from both an exhibition at Pioneer Works (one of the owners here is Gabriel Florenz, who was also the founding artistic director at the nearby cultural center), and an after-hours Bushwick biker bar run by Greg Minnig and Jason Grunwald. The whole thing comes together as a kind of eclectic roadhouse.

And fortunately, as art directed as the whole room is, it doesn't feel contrived. Everyone involved clearly put a lot of love and energy into San Pedro and, if you spend even a few minutes with them down at the end of the bar, you'll see that they've made it into a place that they personally want to hang out at with their friends. The massive mahogany bar itself was rescued from an abandoned house in Bushwick, and the cozy three-sided booths were custom made by a buddy of theirs, as were the concrete tables set up on San Pedro's upper level, which will soon double as an occasional stage. 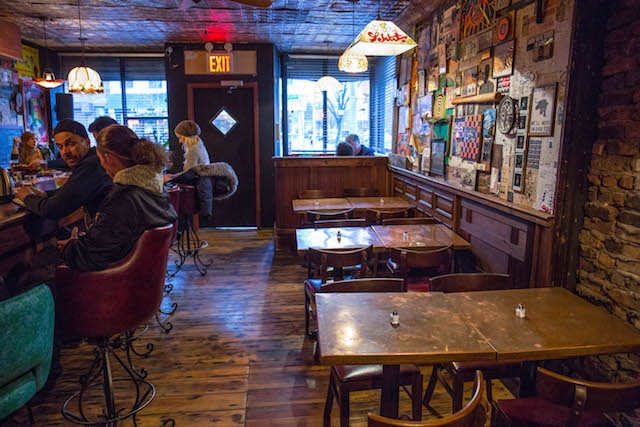 THE BITES
So San Pedro is very much a bar, and you could drink here every night for weeks without ordering food and not feel weird about it. But that would be a mistake. The chef here is Norberto Piattoni, who played with fire at Metta in Fort Greene up until recently, and is now cooking up a short but satisfying menu of simple Mexican snacks.

The tacos, for instance, are bare-bones affairs, a warm, floppy grilled tortilla filled with a mound of meat (or mushroom), a bit of raw onion and parsley on top. Last Thursday evening I made quick work of an okay Carnita, a better Carne Asada, and an even-better-still Lengua. The flavors definitely need some amplification, so you'll want to pour on the housemade hot sauce, served in repurposed Corona bottles, and give a few shakes from the salt placed at every table.

The Mushroom Quesadillas are dense and chewy, with plenty of funghi and gooey cheese inside, and the accompanying salsa adds a bright zing to things. The Tamale is fine, and certainly filling enough to make for a good drinking companion (I got the "roja" version, though prior to my adding hot sauce it was unclear why it was designated as such). Surprisingly, the best dish on my table turned out to be the Tostada Frijoles, the tortilla here fried crisp and snappy, with an ample mound of beans and creamy queso fresco on top. Made me wish I tried the Sour Cabbage version as well.

THE VERDICT
The opening of San Pedro is obviously great news for locals, and it already feels like a place you could easily settle in for a few hours on any given night. Combine that with Piattoni's Mexican bites, and the situation gets elevated into what may even be a destination drinking spot.