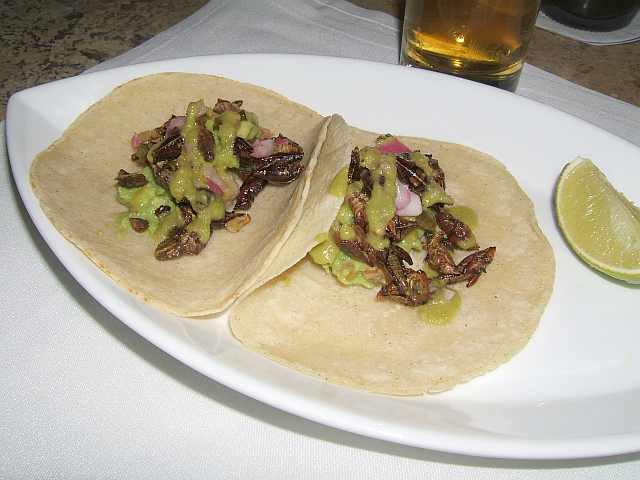 Recently, we learned that the Oaxacan delicacy of chapulines, or dried grasshoppers, hits the shelves in NYC at the end of this month. This news came to us from a diminutive friend who's been bestowed the nickname Chapuline by his fellow line cooks at a Chelsea restaurant. Ever optimistic in our quest for weird foods we hit Mexican groceries in both the Bronx and Queens armed with the question, "Se vende chapulines," only to come up empty-handed.

Then we remembered that Julian Medina's brand-new Mexican spot Toloache is serving the crunchy little critters as part of its taco lineup. Normally it's not fair game to write about a restaurant while it's still in its larval stage. But since it involves what some might consider extreme eating and tacos, we're exempting Toloache from that rule.

Each of the open-faced tacos is filled with well over a dozen of the tiny brown insects whose exoskeletons bring to mind miniature armadillos. They're tossed with onion, jalapeno and a little guacamole. We're not easily grossed out by strange-looking food, but we were prepared for the insects to have a funky taste. This was not the case at all. In fact they were quite good and had what's best described as a roasty, nutty flavor. Thanks to the bright heat from the peppers, these tacos beg to be eaten with an ice-cold glass of Tecate. At $9 for two, they're almost twice as expensive as the fare that can be had at taco trucks in Jackson Heights, but that's to be expected given the nabe. Since the chapulines were so good, we ordered the molleja, or caramelized veal sweetbreads with corn and pasilla salsa. These were somewhat disappointing mainly because they tasted more stewed than caramelized. 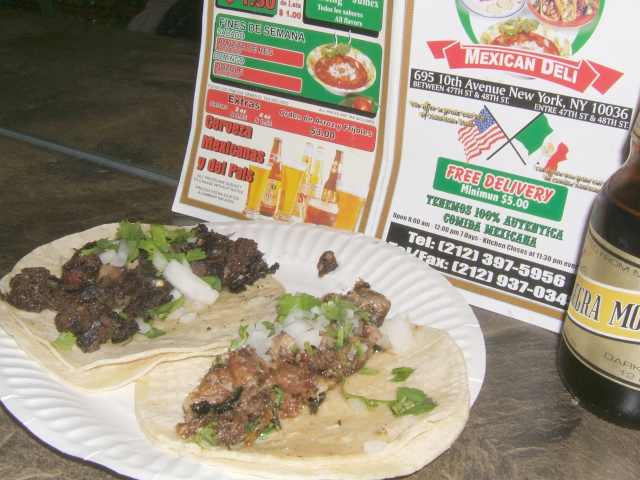 In an effort to redeem to our Mexican organ meat eating fiesta we headed over to Tehuitzingo Mexican Deli on Tenth Ave. Thanks to a blaring jukebox and the TV being tuned to the Brazil vs. Mexico soccer game this joint just screamed taqueria. Of course a menu that includes everything from lengua, or beef tongue to oreja, or pork ears also helped set the mood. We ordered two tacos: sangre, or goat tripe, and cabeza, or beef head. Sangre, literally translates to blood, and the blackish taco is more akin to a rich blood sausage than tripe.The beef head taco was filled with creamy bits of fatty meat as well as crunchy fibers that no doubt were so transformed by being tossed around a screaming-hot flat-top. As Gothamist left Tehuitzingo we asked the owner, "Se vende chapulines." In English that was far better than our Spanish he responded, "No, but I used to." Looks like we'll be going to Toloache for our chapulines until further notice.