Taco Bell's Doritos Shell Is Coming For Us All!

Last year we learned that Taco Bell was testing out new Doritos flavored taco shells... but only in Ohio. Well, adventurous eaters on a budget, now you will be able to sink your teeth into the flavored crunch, too: the shell is going NATIONAL. According to reports coming directly from inside the Taco Bell headquarters, the Doritos Locos Taco will be available nationwide starting at 12:01 a.m. March 8th. Which is the perfect time considering a lot of bad decisions and alcohol will have to lead up to procuring one of these. To tide you over til March, here's a look at how your Taco Bell Cool Ranch Doritos Locos Taco sausage gets made (though these are only in the testing phase for now): 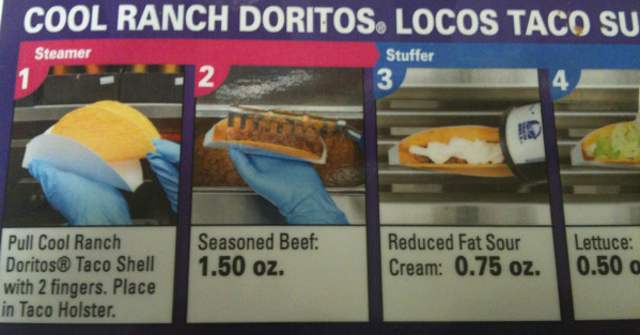 So Good Blog's Jon Eick has been live-Tweeting his Doritos Locos Taco experience all afternoon from the Taco Bell test kitchen, if you really want to know more.

#doritos
#doritos locos taco
#nationwide
#taco bell
Do you know the scoop? Comment below or Send us a Tip