Surf and Turf on West 26 Street 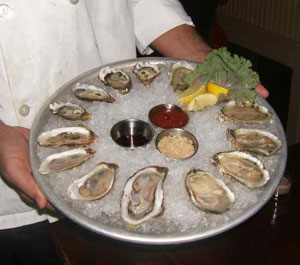 It's no secret that we love the succulent Texas 'cue on offer at Hill Country. Like many folks we also love the rockin' live music, but sometimes we're just not in the mood for beef, or more likely there are some noncarnivores joining us who are more interested in music than meat. All of which make us very glad that seafood house Black Pearl lies directly across the street from Hill Country.

As you've no doubt guessed by now, we're partial to the oysters at the Black Pearl. Slurping down a few with a glass of Newcastle is our idea of a perfect prelude to having a bit of beef across the way. And since Gothamist prefers to err on the side of caution when it comes to mollusks we feel entirely safe eating them now that we're well into the months ending in "R." And what better time to be savor these briny little guys given that there's been a boom in Long Island oyster farming. Sure some mollusk mavens prefer the Island's ubiquitous Blue Points, but as far as Gothamist is concerned they lack the oceanic character that's essential to a good oyster. So naturally, we avoid all the horseradish and other condiments and eat the tasty bivalves with a briny dose of their own liquor. Rather than Blue Points, we go for plump, round-shelled Orient Points that are bursting with the flavor of the sea.

Depending on availability, Black Pearl also has several other Long Island varieties on offer, including Pine Island, Jamesport and Duck Island. Should you find yourself at sea as to which oyster to order just ask Black Pearl's master shucker, Eddie C., for some guidance. He's so devoted to his craft that he collects customer's business cards and calls them when their favorite oysters are on the day's menu. Despite the boom in L.I. oysters, it's one from Nova Scotia, the Beau Soleil, that Eddie says is in most demand. "I don't get 'em that often, but when I get 'em they want me to call."

Word on the street has it that folks at the Pearl are fond of Hill Country pitmaster Robbie Richter's beef brisket and ribs. Now if only they could convince him to smoke some oysters ...