If you haven't read George R. R. Martin's novels that inspired the global sensation Game Of Thrones HBO show, you might be unfamiliar with the author's obsession with detailing the food and beverages being consumed by the characters. Dude really, really loves his dinner descriptions. Someone else who really, really loves both dinner and dragons: Chef David Santos, who's resurrecting his Um Segredo Supper Club, including four Game Of Thrones-inspired iterations taking place in July.

Santos created seven courses for the dinners each inspired by two characters who share some kind of relationship—or may have a relationship in the new season(s). Take the fire kissed tuna carpaccio with onions and jalapeño ice created for Jon Snow and Ser Davos. "I wanted to play on the thought of Jon being of ice and fire. That's where the torched tuna comes in along with the fiery jalapeño ice," Santos explains. "Sir [sic] Davos's banner flies the onion and he's also known as the onion knight. Their relationship together will be hugely important in convincing the mother of dragons to help!"

Or the black chicken and smoked eel dumpling soup as a tip of the hat to Cersei Lannister and Euron Greyjoy. "This could get interesting between these two. I'm super curious how this relationship from necessity will pan out. More than likely a disaster!," Santos predicts. "For the dish, I am taking a Silkie chicken, which is probably the coolest, most beautiful chicken in the world on the outside but when the feathers are removed its skin is as black as Cersei's heart! What better way to make this surf and turf connection than with the snake of the sea, the eel to represented that snake Euron! A deadly, delicious combination." 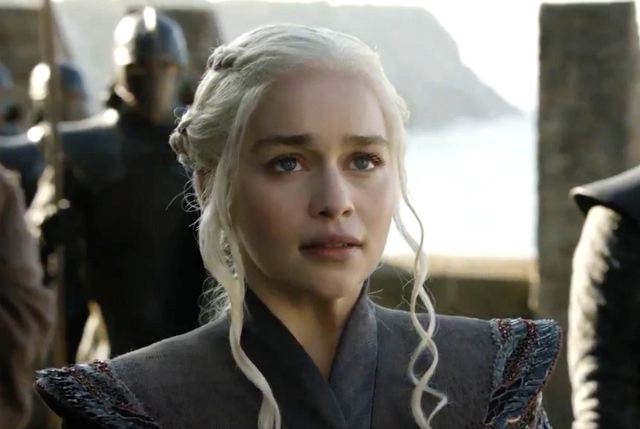 And for dessert: Daenerys and Jaime Lannister represented in a burnt banana blondie with vanilla bacon snow and torched rosemary. "Like you thought I would forget about my Mother of Dragons! These two have what I call an opposing relationship. But somehow I think they are gonna help each other by the end. There is the whole queen slayer theory out there!" according to Santos. "Burnt banana to represent her and her ability to get burned and still be awesome, the blondie to represent them both as their hair would dictate, the vanilla and bacon to represent the opposition that at first glance may be bad but in the end is great. Snow because after all winter is here!"

What, no raw horse heart? I guess that's old news at this point.

Other dishes include pairings of Arya Stark and Gendry (You know! The guy in the rowboat!), Tyrion and a dragon, Theon and Yara Greyjoy, and Sansa and Littlefinger, aka Petyr Baelish.

All of the dinners are BYOB, which means its time to dust off that bottle of Game Of Thrones-branded wine and beer or get the new brew, a 8.3% AVB Belgian-style double white ale called "Winter is Here."