Summer Officially On: NYC Icy Is Back In The East Village

Fans of NYC Icy, rejoice! The elusive here-today, gone-tomorrow sweet purveyor now is peddling its mango-basil and watermelon chip ice creams in not one but two locations. Not only is the good stuff available in Ditmas Park but this weekend it started pushing the good stuff out of the front window of 171 Avenue A, near 11th Street. And Ray's Candy, just down the avenue, is not amused. 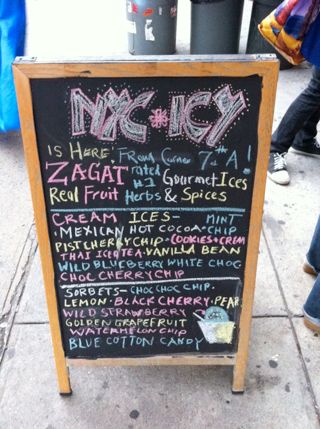 The current list of flavors at NYC Icy (Garth Johnston/Gothamist)

The new home for NYC Icy is just blocks north of its digs from last summer and should be more permanent, as it is attached to an upcoming restaurant called Badburger. Assuming Badburger's fare is better than its name implies and makes it, NYC Icy will be the official dessert of the joint, with street sales up front, through at least October.

As for Ray, last year the troubled deli owner claimed NYC Icy took away "half" his business. So naturally he's put up a sign offering "Good 'Ol NYC ICY" outside his Avenue A establishment. But despite his goodwill with the people, folks aren't buying it. Yesterday at least, Ray's sign has had been vandalized with a big black "FAKE" written over it.

Meanwhile, NYC Icy's return to the East Village comes as the ice treats landscape is heating up for summer. Not only have the Van Leeuwen and Big Gay ice cream trucks gone brick and mortar, but new takes on keeping cool just on keep popping up.