Above ground, the glittering Time Warner Center and its fancy shops cast their chilly shadow over Central Park; down below, commuters and tourists swirl in one of the city's busiest subway hubs, Columbus Circle. Soon, the two will merge, when a new shopping center and food court-type outlet opens below ground, offering the chance to eat and shop without having to venture into the sunlight. The Times takes a look at a forthcoming project called TurnStyle (see what they did there?) that will bring retail and restaurant outlets below ground to the IRT line.

The subterranean mini-mall will consist of three sections: nearest the subway, grab 'n go spots like Magnolia Bakery, Dylan's Candy and Vegan Diva; next, a retail section with an electronics shop, wine shop, ATMs and other outlets; and then a food hall with more sit down selections, which includes Ignazio's Pizza, Gelato Te Amo and "fancy tacos" so far. Up front there'll be standing room tables wrapped around pillars; in back, more traditional seats and tables. With options like these, you'll never have to schlep up to the earth's crust again! 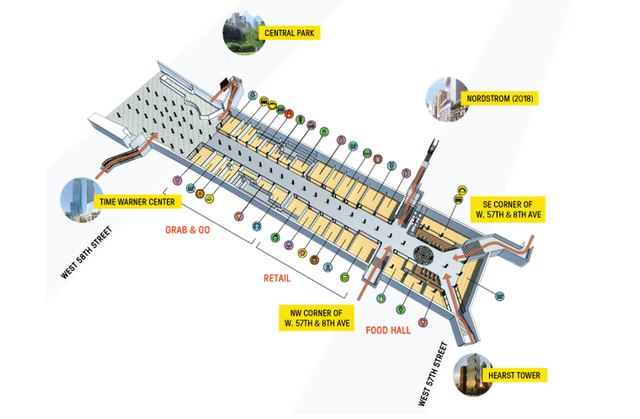 The project is being helmed by Susan Fine, who was responsible for transforming Grand Central Terminal into the shiny dining destination it is today. Here, prices for the 30 storefronts will go for $275 to $425 per square foot, or about one-third of comparable outlets not inside of a subway station. If successful, the MTA hopes to expand the program to other subway stations like West 4th Street and Times Square. Can we bring Siberia bar back while we're at it?

#columbus circle
#dylan candy bar
#food court
#irt
#magnolia
#subway
Do you know the scoop? Comment below or Send us a Tip