Street Vendors To City Council: These $1,000 Fines Are Killing Us

The Committee on Consumer Affairs convened this morning at City Hall to discuss the steep fines imposed on food vendors for non-health violations. The fines, which run as high as $1,000 for minor infractions such as improperly displaying a permit, are deliberately levied in an effort to put vendors out of business, say advocates of a pair of bills that would reduce the maximum fine amount to $250 and amend the way fines escalate.

Citing statistics that the cost to issue violations exceeds the revenue they generate, street vendor ally and Council Member Stephen Levin presented a crate before the council with over 7,000 violations issued in the last year alone. "Were they all paid?" asked the Council's Consumer Affairs chair Daniel Garodnick. "No. They were not," replied Levin, "They were not all paid because the fines were often too high." Levin believes the general public would never stand for similarly escalating fines for violations like parking tickets, but street vendors lack the political clout to defend themselves. Most advocates of lower fines for vendors noted that minor administrative violations accounted for the vast majority of tickets, not transgressions that would directly affect the health and safety of the public. 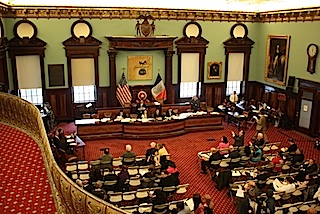 Prior to 2006, a first violation cost vendors $50 with increases for each subsequent violation to a maximum of $250 for the fifth and sixth infractions. Today, a sixth offense will set vendors back a stifling $1,000. That's a pretty penny for a vendor who, according to Levin, might net only $15,000 in a given year—especially if he's spending $36 per day to feed the parking meter!

"What if we're talking about the same problem repeatedly," asked Council Member Garodnick. "If we were talking about the same violation is that schedule really so unfair?" Sean Basinski, Director of the Street Vendor Project, explained how it happens: "For example, failing to display a license: The first time, it's inside my jacket because its cold. The second time, maybe the license got turned around while hanging around my neck. The officer issued a ticket for that. The third time, the police officer writes a ticket for vending without a license displayed while I'm still setting up. If the officer writes 'vending' on the ticket and the vendor goes to court, who is the judge going to believe? I do think it is unfair."

"The outrage here is that the punishment does not fit the crime. The violation of having your license in your pocket instead of around your neck, that is not commensurate with a $1,000 fine," said Levin. Only 7 percent of fines over $800 were paid at a time when the city spent $7.4 million on vendor-related ticketing that garnered only $1.4 in revenue from fines collected.

Council Member Melissa Mark-Viverito's outrage drew applause from the dozens of vendors in attendance when she asked, "What is the aim of the fine structure? It is correcting behavior or deterring hardworking members of our city from working?" Kathleen McGee, director of the Mayor’s Office of Special Enforcement, replied, "The purpose of this law enforcement scheme, as with other law enforcement schemes promulgated by the city, is to ensure compliance with the laws and to deter illegal behavior."

In response, Mark-Viverito bluntly declared, "It is a scheme. I think it is another effort by this administration to criminalize the poor." City reps then offered their own statistics that actually show an increase in payments—up to 18 percent in 2009 from 10 percent in 2005—even after the higher fines took effect in 2006.

The top three violations issued to vendors relate to vending less than ten feet from a crosswalk, failing to keep all items in or under the pushcart, and failing to conspicuously display a license. Last year, the city issued over 26,000 tickets to street vendors.