Street Cart, Are You Ready For Your Close-Up? 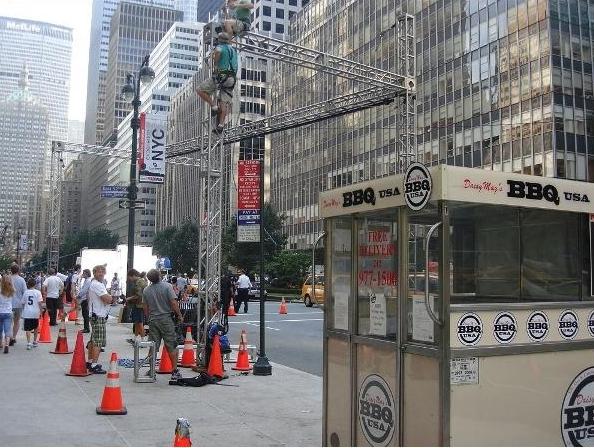 Some folks were mighty disappointed when a Daisy May's BBQ cart on Park Avenue and 52nd Street turned out to be a tease. According to Midtown Lunch, the cart was set up outside the Seagram Building for the filming of the next Adam Sandler movie, You Don't Mess With Zohan.

The Hollywood Reporter says You Don't Mess With Zohan was written by Sandler, Judd Apatow, and Robert Smigel and it "follows the exploits of a Mossad agent who fakes his death so he can anonymously move to New York and become a hair stylist." That actually sounds pretty funny, but does this mean a Mossad agent might be eating a pulled pork sandwich?

This seems like the third Sandler film in a row to be filmed as least partly in the city: Reign O'er Me and I Now Pronounce You Chuck and Larry were both filmed last year. And Midtown Lunch says that the usual Park-and-52nd cart, Jiannetto's Pizza truck, is now at 48th Street between 6th and 7th Avenues but will move back after the filming.