Straws Are Bad, Don't Do Straws

Be they bendy or straight, designed with loops or oversized, straws are bad. How bad? Well for one, they're killing the whales and other marine life, who ingest plastic matter like pieces of straws mistaking it for food. If straws are bad enough that Adrian Grenier—who sanctioned this East Village nightmare—has given them up to help reduce water pollution, perhaps we, too, should question our drinking method choices.

"Our world's oceans are expected to contain 1 metric ton of plastic for every 3 metric tons of fish by 2025, and by 2050, more plastics than fish by weight," according to Baykeeper, an environmental group for NY and NJ. The very waters that surround our city are swimming with tons of plastic to the tune of an estimated 165 million plastic particles.

The Washington Post dives into our devotion to straws this week, questioning our motives—laziness or germaphobia or routine?—for blowing through 500 million straws every day in the United States. The article tracks the journey of the straw from the Starbucks frapp to the landfill and possibly on to get lodged in the stomach or respiratory system of some poor unfortunate marine creature unlucky enough to cross paths with the plastic tube.

"It will probably remain stuck through the lid of his cup when he tosses it into the recycling bin. A truck will carry it to a waste transfer station, and then another truck to a recycling facility, where it will land on a conveyor belt. Machines will then pluck away the recyclables that surround it—first the cardboard, then the paper, the aluminum, the glass, the plastic bottles, and so on—until it ends up in a pile of items too small, too useless to be detected by the machines."

And so, the renewed call to ditch the straw. 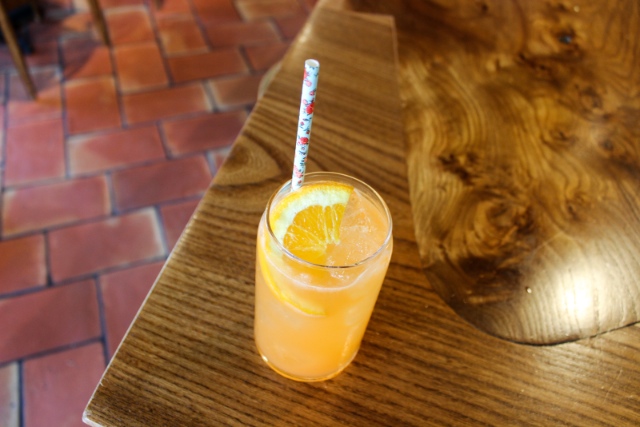 A paper straw at Sunday In Brooklyn (Nell Casey/Gothamist)

Instead of quitting cold turkey, one could invest in reusable or compostable straws. There's also a push for the paper straw. Williamsburg restaurant Sunday in Brooklyn employs the pretty paper straws for some of their cocktails, as does Grand Army in Boerum Hill. The problem with these straws, one discovers after ten or so minutes have passed, is that they're so eco-friendly they tend to disintegrate while they're still in use.

So perhaps, we stop using straws altogether—along with all other types of single-use plastics like bags or takeout containers or water bottles.

And if the environmental concerns aren't enough to move you—we'll probably be under water or blown to smithereens soon anyway—there are more aesthetic considerations to be made, too. For one, straw use contributes to "smoker's wrinkles," the kind of wrinkles that congregate around your mouth. And in addition to not really being all that great for preventing cavities, the air you ingest by using straws makes you gassier than those farting cows who are also killing the planet.

#plastic
#straws
Do you know the scoop? Comment below or Send us a Tip