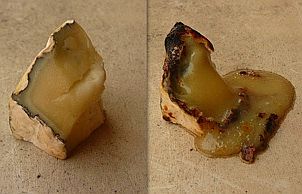 Sunday June 22nd marks the return of Stink-Fest on Smith Street, a mini-celebration of all cheese pungent and dank. With that comes one of the better competitive eating events in recent memory, the Stinky Cheese Eating contest. The call for new competitors is out at this very moment, so get ready: Last year, Oliver “cheese baron” Butler – director of acclaimed theater company The Debate Society – dominated the contest by downing 6 oz. of Cantal in one minute flat.

For the event, the greater Smith & Vine family of establishments (including Stinky Brooklyn and The JakeWalk), along with Chestnut, will form a temporary, Voltron-style hybrid restaurant serving fish tacos and fried cheese curd, along with a summertime variation on a decidedly more wintertime cheese dish, Raclette. Wash that down with the JakeWalk’s eponymous drink, named for a form of organophosphate-induced delayed neuropathy that resulted when two stupid guys tried to cheat Prohibition laws in the late '20s by adding toxic glop to Jamaican ginger extract. Eighty years later, the Jake Walk cocktail, designed by street fighting cocktail vigilante Dave Wondrich, contains elderflower liquor and white rum, no glop, and tastes very good. The man floats a piece of crystallized ginger on top of that stuff.

Food contest we’d like to see: A lowdown, hands-tied-behind-back Casu Marzu, or “maggot cheese,” showdown on the Brooklyn Bridge while Alain Robert and Renaldo Clarke scale the steel wires on the sides and passing motorists throw rotten heirloom tomatoes at the competitors, with Kim Cattrall as MC.