Still Got It: The Islands In Prospect Heights

The Islands doesn't announce itself on Washington Avenue a half block north of the Brooklyn Museum—its sign is an easy-to-miss footnote on the awning of the Key Food next door and a moldy-smelling chair out front is not terribly inviting—but the lines for its lovingly prepared Jamaican standbys suggest that it doesn't need to. The tiny BYOB restaurant has just four tables on a platform over the kitchen, up a comically steep and narrow flight of stairs, but it's worth the squeeze for those visiting the neighborhood, and those looking to avoid the reputed long waits for takeout and delivery.

Entrees range from $10-$20—a friend who used to live nearby and frequently ordered delivery said items fluctuated in price from day to day on the whims of the staff—and come in small and large sizes. A note on this: a small order is enough for two meals, so it stands to reason that a large could feed a family of four. I went for dinner on a soupy-hot summer evening, still working off the load of a late office lunch and a day spent stationary. My neighborhood guide was game for a trip to the Islands but cautioned that he remembered mostly ordering from there in the winter. Afterwards, it was clear why. 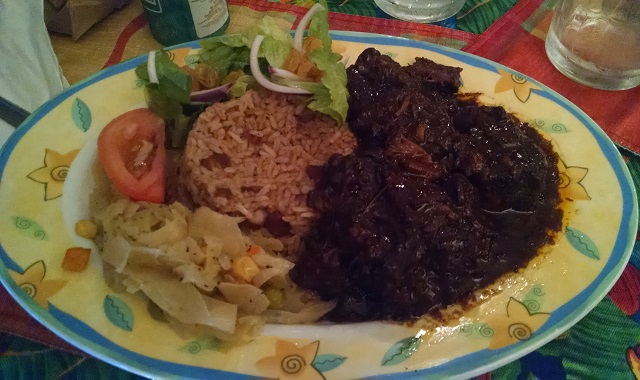 Nearly all the food I tried was heart-slowingly rich and heavy. The mac and cheese, a beloved appetizer, comes in a buttery brick with a mesmerizing brown crust across the top. The curry the curry goat arrives in is thick and spicy, while the goat cubes themselves come apart on contact into tender strands. The oxtail is also slow-cooked to near-gelatinous softness, and comes in a gravy approaching mole on the scale of dark sweet sauce sorcery. And the calypso shrimp swim in a yellow-brown peanut sauce.

The only break I found from gut-busting density (the jerk chicken is also supposed to be good, and there are several veggie options) was the salad that comes with the mains alongside the also-heavy rice and peas. The lettuce with raisins and raw onions is fine as a palette cleanser, but there's no question that fat is the star of the menu, and eating through it is a surefire way to build up some winter insulation. The service was attentive, impressively so considering the waiter was navigating the stairs with food and dealing with takeout orders, and the vibe in the attic-like space was cozy, and dim thanks to windows that end midway up the front wall. 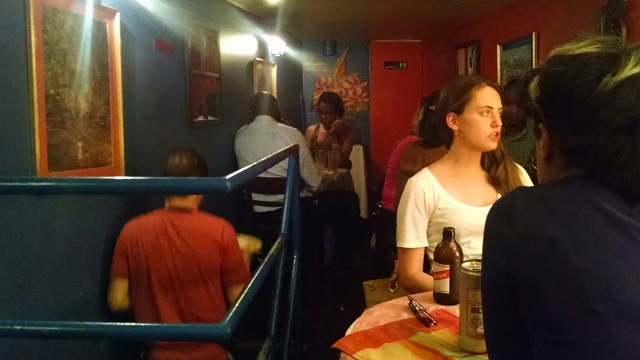 The view from the front table. (Nathan Tempey/Gothamist)

The toughest part of my visit was leaving to face the July heat again, and fighting back a food coma long enough to make it to the subway. I'm already planning some boots-weather trips to the Brooklyn Museum, and next time I'll definitely have to eat a light lunch.