Still Got It: Taqueria El Fogon In Bushwick

When it comes to tacos, Bushwick is the (closest thing to a) promised land, and given the density of quality taquerias, visitors can take their pick of styles and settings. Want to chow down on spicy chorizo in a plexiglassed-off portion of a tortilla factory? You got it. Want to wash down some tacos al pastor with pulque in the back of a deli? Sure thing. Looking for a veal pick-me-up after an afternoon shopping on Knickerbocker Avenue or playing basketball in Maria Hernandez Park? The incredibly cheap counter at Taqueria Izucar is a good bet. Where Taqueria El Fogon really shines is as a casual place to meet a friend—or a cheap date—before a night out or after a long day at work. 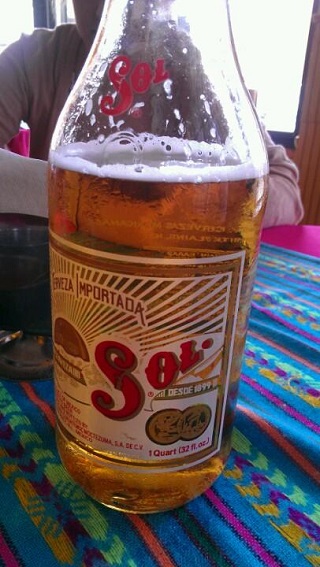 You have to admit $4.50 for this large bottle of beer is a pretty sweet deal. (Foursquare)

I may be getting soft, but I'm a sucker for table service, and particularly for quiet places that don't rush you out. Three dollar beers and $4.50-$5.50 32-ounces don't hurt, either. Hanging on between the Morgan and Jefferson L stops on Flushing Avenue at Knickerbocker, El Fogon offers all of this, plus a dim, welcoming-if-no-frills dining room that invites you to take it all in and talk conspiratorially over the tortilla chips. I'm not going to go so far as to claim that the tacos are the best in Brooklyn, and it seems many on Yelp would disagree adamantly, but I have savored their tacos carnitas ($2.50 each) and fish tacos ($9 for three), as well as their vegetarian burrito. The chips are good but the salsa can be on the watery side, and there is a whole breakfast menu I haven't explored. Still, on the whole the food is an inviting, carefully arranged balance of textures and tastes—fluffy tortillas and greasy, subtly spiced meat; viscous and savory beans and nopales and thick, almost-sweet cream. Combined with the laid-back, welcoming restaurant and a few Modelos, dinner here can take the edge off and serve as a relaxing coda or a rejuvenating kick-start, depending on your plans.

I am a big fan of the taco counter, the subway churro, and the sidewalk tamale—germophobes, come at me!—but the psychological transformation I'm describing isn't something that can be achieved scarfing down food, no matter how delicious, on a park bench, a stoop, or in a fluorescent-lit sliver of a room. Sometimes you just need table service.

#bushwick
#Cholulita Bella Deli
#Mexican food Shangri-La
#Puebla
#still got it
#tacos
#taqueria el fogon
#Taqueria Izucar
#tortilla factory
Do you know the scoop? Comment below or Send us a Tip
A new Gothamist is coming! We’ve moved comments over to our beta site. Click here to join the conversation and get a preview of our new website.