Still Got It: Prosperity Dumpling

The line at Prosperity Dumpling is a consistently impressive cross-section of the city. On any given early evening it features Wall Street suit-wearers, tatted-up Lower East Side barflies, sweating skateboarder kids, construction workers, homeless guys, and Chinese people of all class backgrounds.

But Prosperity doesn't contain multitudes—with a front-of-the-house area the size of a freight elevator, it can't. Still, the place manages to pack in more than a dozen customers at any given time, some of them eating on stools against either side wall, bodies scrunched up like they're riding the train during rush hour. The line moves quickly enough that I've never spent more than 10 minutes playing human Tetris with those arriving, leaving, and waiting for their orders. The main attraction drawing these crowds is the dollar dumplings, pork-and-chive treats that are by turns crispy and tender, spicy and greasy, with the chives providing a clean finishing note. 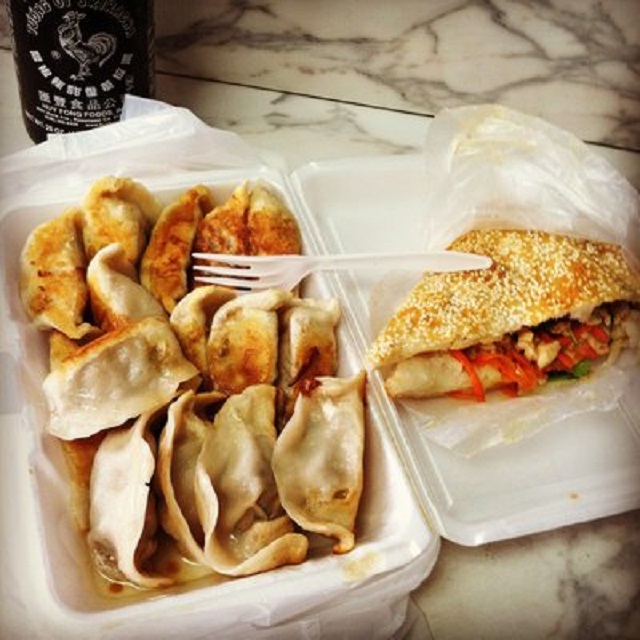 Fried dumplings and a sesame pancake with chicken will absorb whatever is ailing your gut, and maybe cause some new problems, depending on how many of the dumplings you eat. (Yelp)

Back in 2011, the dollar dumplings came six to an order, but there's no keeping a place like this a secret, and four quarters will only get you four dumplings nowadays. That's still a great deal. These things are filling, and two orders are a big meal by themselves. Also on offer are boiled dumplings, veggie dumplings, and sesame pancakes, which you can order with veggies (carrots and cilantro) if you want to pretend to yourself that it's possible to make something about this carb-and-grease-fest healthy. The watered-down Sriracha and the dumpling sauce add some much-needed wetness to the fried stuff, and though I see people come specifically for the soups, I can't vouch for them.

The place got spruced up with some classy new wood paneling inside in the last year or so, and now has two tables out front, adding to a list of eating options that also includes the ledge in front of the school across the street, and the benches and tables in Sara D. Roosevelt park round the corner. Those are assuming that you can't get a stool inside and/or don't want to eat elbow-to-elbow with a crowd.

Behind the counter is no less jam-packed, and as you're paying, it's enthralling to watch the dumpling assembly line, from the folding of the dough in back to the people with big wooden paddles stirring dozens of dumplings at a time, sorcerer-like, in massive, water-filled cast iron pans. I'm not privy to the working conditions there, but every dollar menu, like every $10 manicure, has a human price, and I always see the same guy working the front counter, no matter the time of day, so I'll just offer a friendly reminder here about the duty as a dumpling lover to tip well (and if you know anything about the working conditions there, email us at tips@gothamist.com).

So as not to end this on a glum note, I'll also point out that you can take the magic of Prosperity Dumpling home: 50 frozen pork-and-chive dumplings will set you back just $9. And before you go tossing those bad boys into a pot of water or a pan coated with hot oil, check out this handy guide to cooking dumplings, and making dumpling-sauce, this-author-tested and approved.

Prosperity Dumpling is located at 46 Eldridge St. between Canal and Hester Streets in Chinatown (212) 343-0683, www.prosperitydumpling.com

#dollar dumplings
#dumplings
#labor exploitation
#mcdonald's
#nail salon
#prosperity dumpling
#sesame pancake
#still got it
#original
Do you know the scoop? Comment below or Send us a Tip
A new Gothamist is coming! We’ve moved comments over to our beta site. Click here to join the conversation and get a preview of our new website.