Still Got It: Paquito's In The East Village

In this city, restaurants come and go faster than you can say "ethically sourced ramen burger." And even though there are great new additions to the culinary landscape popping up every week, you've gotta give kudos to anyone who can stick it out for over a year. With that in mind, we bring you Still Got It, our tribute to establishments that continue to serve mouthwatering meals and drinks long after the buzz has faded—or where the lingering hype is still justified.

Long-time East Village burrito spot Paquito's opened as a no-frills hole-in-the-wall with a takeout-oriented operation perfect for pre-gaming ahead of a night on the town, or grabbing a bite after a long happy hour. Later, its owners expanded into a storefront next door on First Avenue, adding a spacious dining room, bar, and backyard garden to a neighborhood increasingly lousy with cramped, shadowy establishments offering small plates and large tabs. 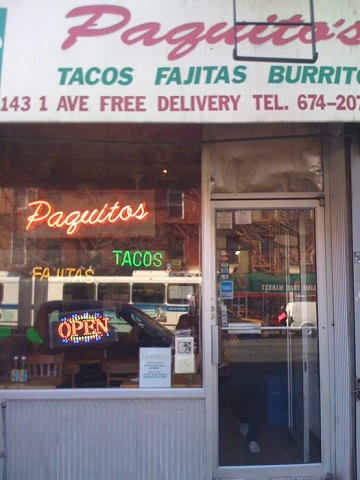 Where it all began. (Yelp)

Today, the eat-in side of Paquito's offers a sanctuary of calm—or at least a decent likelihood of finding a table—and cheap eats in a neighborhood where the simple proposition of meeting a friend for dinner can easily veer into a stressful bummer spiral. And importantly, the food is reliably tasty. The burritos, a main attraction, come with the lettuce and pico de gallo on the side. The cactus burrito is hiding in the vegetarian section of the menu, but it's a treat, and a fun departure from middle-of-the-road American Mexican fare (nopales neophytes take note, though: cactus has a slimy texture and can be an acquired taste).

It's hard to go wrong on this menu—the enchiladas Acapulco, swimming in tangy-smoky chili guajillo, are another highlight—and there's plenty for the spice-averse as well as those craving carefully made, fusion-free Mexican.

Also of note: with $5 margarita specials, and massive $10.95 lunch specials, Paquito's can be the spot for your happy hour or midday meetup. And if you're on a budget or not looking to linger, stick to the takeout side, where everything runs $2 or so cheaper. Come spring or the next hint of eternal summer, though, that ample, breezy garden will be well worth the price of admission.