In this city, restaurants come and go faster than you can say "sustainable locavore burger." And even though there are great new additions to the culinary landscape popping up every week, you've gotta give kudos to anyone who can stick it out for over a year. With that in mind, we bring you Still Got It, our tribute to establishments that continue to serve mouthwatering meals and drinks long after the buzz has faded—or if the lingering hype is still justified.

Nom Wah Tea Parlor, Chinatown's longstanding dim sum cornerstone, has been tucked into the "Bloody Angle" of Doyers Street for 96 years. And in that time, all that's really changed is the way in which you order. At first, the menu was an entirely verbal affair, with no printed prices, no ingredients lists, no specials. Later, tables were handed business cards with items hand-written on the back. Now, the menu is a page-long checklist of over 30 items, ranging from salt & pepper spare ribs to taro dumplings to pan-fried noodles to scallion pancakes.

But Nom Wah's greatest offering is escapism, the chance to walk into a beautifully-lit room on a tucked-away street that's immune to passing fads, trends, and non-AmEx credit cards. You tally up your order and hand it in. Tea arrives. Dinnertime.

Ordering at Nom Wah can be a daunting task given the sheer variety of the menu and the fact that every single item is accompanied, diner-style, with a photo. Still, there's an easy path to success here, and it starts with avoiding the dumplings. This might seem like heresy at the city's oldest dim sum joint, but there's no denying that Nom Wah's strengths lie elsewhere. It's not that the shrimp or minced beef dumplings are bad—it's just that they'd never make it onto even the second disc of Nom Wah's Greatest Hits compilation. Instead, get the "Original" egg rolls, which are served like two massive golden meteorites for $7. Pair then with the pan-fried scallion pancakes ($4.50) and a bottle of Tiger and you're halfway home. 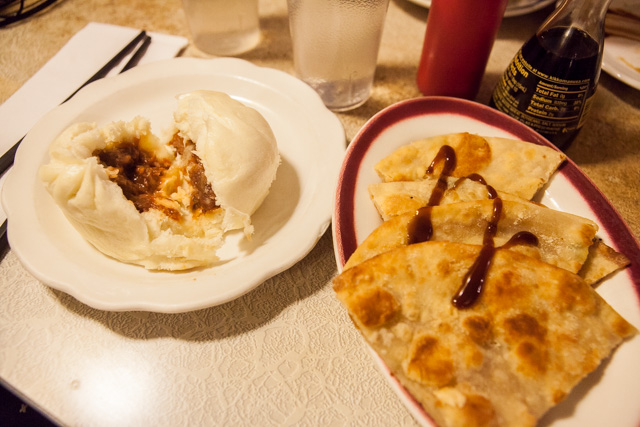 The restaurant's single tastiest plate is the pork bun. A blend of caramelized onions and chopped pork stuffed into a doughy pouch, steamed to perfection. It's the perfect blend of savory and sweet, a life-affirming combination of classic, cheap, and satisfying. Each one will set you back $3.50 and if you don't order at least one per person, you'll be fighting with your dinner companions. Still hungry? Get the pan-fried noodles, which serve as an excellent canvas for each table's assortment of duck, oyster, soy, and pepper sauces ($10). 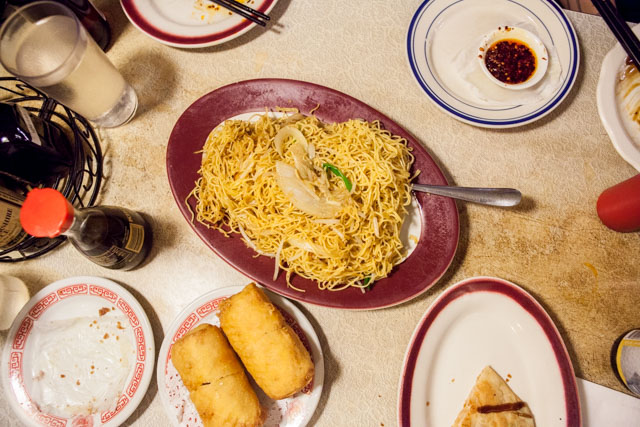 If dumplings is a must, get the old-school Pan Fried ones, which arrive still-sizzling and contain a savory blend of pork and chives ($4.50). The dumplings are nice, fun to share, and much more chopstick-friendly than the pork buns.

You could argue that Nom Wah is too-obvious—that it's an entry-level Chinatown destination. But if the place has become a kind of cliche, it's because so much about it works so well. Its online merch store carries a graphic t-shirt of its highly-Instagramable storefront because, yes, it's really that lovely. It's old news in the best way, serene and reassuring. Some other New York dim sum place might technically be better, but nowhere else has that vintage NYC flavor.

#nom wah tea parlor
#still got it
#original
Do you know the scoop? Comment below or Send us a Tip