When people say a restaurant is "unpretentious," often they mean that it's shitty in a way that makes them feel like they're privy to something authentic, not necessarily that the food is good. Gandhi Fine Indian Cuisine—between its generic name, familiar menu, location in a not-dramatically-gentrified corner of Prospect Lefferts Gardens, and $9-$15 entrees—is both unpretentious and actually delicious.

My wife, an aspiring amateur-Indian-chef, ascribes Gandhi's quality to its fresh ingredients and careful use of fresh spices, including curry leaves. Here's her testimonial:

They don't compromise the quality of the ingredients. Whereas it seems like most cheap-ish Indian restaurants use three main spices and call it good, at Gandhi there are layers and layers of flavors, and the vegetables have never been frozen. You can tell that the saag paneer is using spinach that was cooked 10 minutes ago. 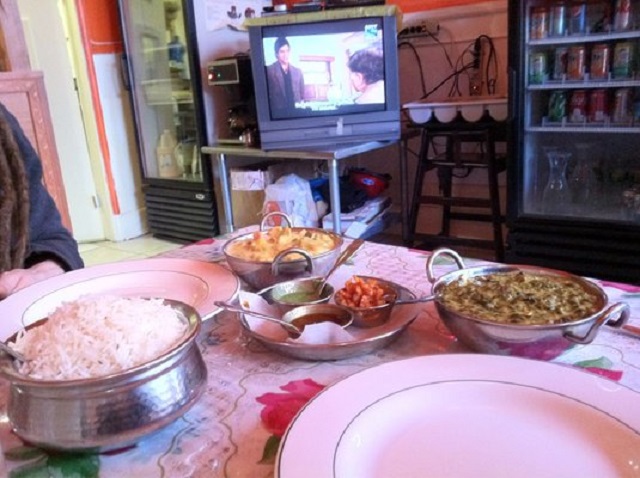 The digs may not be fancy, but they're not ratty either. And the saag paneer is out of this world. (Yelp)

Just transcribing that made me hungry. A husband-and-wife team opened the restaurant in 2010 in a storefront that was previously home to a Jamaican jerk place, though take away the festive lighting and the orange paint, and the tight room with a tall ceiling and tile floor is also easy to imagine as a laundromat. The current owner, Karti Sher, took over in 2013. He is from New Dehli but the menu spans the country's cuisines, incorporating all the standbys of U.S. Indian restaurants, including tandoori and biryani dishes.

It's hard to order wrong, but I'm partial to the saag paneer, in which the paneer really tastes like fried cheese, not white rubber, and the achari gosth with lamb, a house specialty with tender lamb chunks swimming in a rich red curry. The naan is invariably fresh and fluffy. That all of these items are so typical is what makes Gandhi great. Even the samosas can surprise with their complexity. And if you ask for your entree spicy, that's how it will come.

The restaurant does a brisk takeout business, and deliveries can get backed up an hour or more, but I have never encountered a wait for the six tables squeezed into the front of the house. Plus the service is extremely friendly. Gandhi is BYOB, and the server will give you a nice glass so that you can feel classy about the wine you purchased at one of the high-countered liquor stores nearby. And not to totally spoil the surprise, but when feeling torn between stuffing yourself and taking some home, remember that the same waiter may bring out a complimentary dessert at the end of dinner.