Still Got It: Cafe Tibet In Ditmas Park

It can be hard to give directions to Cafe Tibet. This restaurant in The Neighborhood Formerly Known As Victorian Flatbush occupies a sliver of building hanging out over the Cortelyou Road subway station, and is set back from the road behind one side of the awning for a Tibetan-family-owned bodega called Asian Grocery, Inc. The cafe is advertised on a small sign with an arrow on the sides of that awning, but probably a more useful landmark is the quarter-powered pony ride for kids out front, set between the Cortelyou station's wrought iron fence and the store's shelves of sidewalk produce. 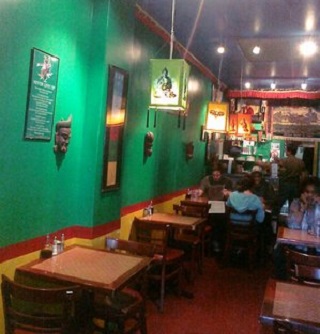 Cafe Tibet is a walking-single-file kind of restaurant. (Yelp)

The place has a following, and signage issues aside, its owners have no trouble packing it on weekends. Things to know before you come: it's cash only and BYOB. Wine you can find at a liquor store on the same block, opposite side of the subway station, and the neighboring bodega is stocked with an extensive beer selection, accessible by a side door inside the dining room if you want to really feel like a secret agent in a far-off metropolis. Also in good news, the mood lighting and paper lanterns keep the place from feeling dive-y, and two people can easily fill up at dinner, with drinks, an appetizer, and two entrees, for less than $30.

Once you manage to find a table—the indoor seating area is essentially a hallway with only one four-seater, and outside, overlooking the train platform, there are just a few more tables, so large groups are pretty much out—the menu offer a lot to explore. People swear by the momo, big steamed dumplings filled with garlic-and-ginger-spiced ground meats. I have only had the cabbage-filled veggie ones and found them a little bland, but the hot-mustard sauce that comes with them goes a long way. And there's so much else! 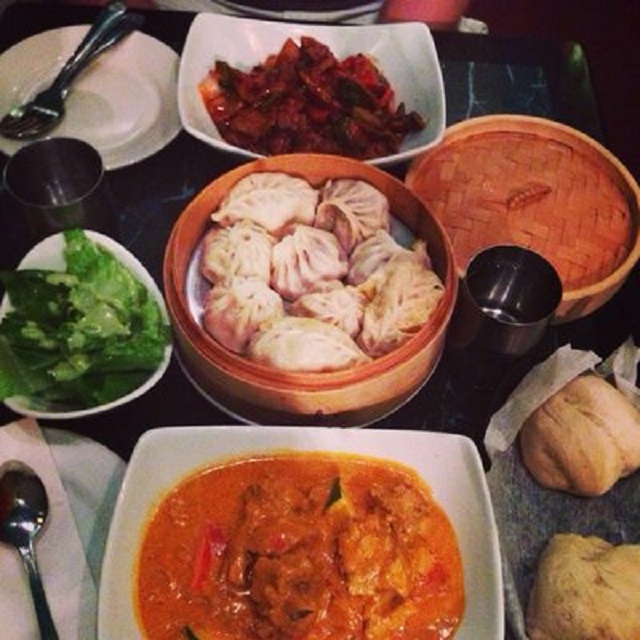 As far as appetizers go, the chana-khatsa is satisfying in a surprising way, consisting of dry, somewhat crunchy chickpeas seasoned to sophisticated spiciness with ginger, garlic, lemon, scallions, and a proprietary hot sauce. Also worthwhile is the la-phing, a gelatinous mung-bean extract swimming in a tingle-inducing red vinegar sauce. As for main courses, the curries are a liquid-y, slightly sour, reddish-orange concoction that are consistently tasty and a good bet for those who like some heat, but not too much. They're available in a variety of meat and vegetarian forms, but the lamb does a particularly nice job of picking up the flavor. The noodle soups are a specialty, and meals in their own right. One called thenthuk consists of thick, square noodles and beef or chicken in briny broth with cottage cheese. Dense, fluffy bread called tingmo serves as the perfect sponge to soak up whatever is left.

Service can be slow, and on busy nights appetizers sometimes come out at the same time as entrees, but the servers are kind and helpful when they get to you. The restaurant opened in 2008 and serves as a welcome counterpoint to the pricey, twee establishments that have come to dominate the surrounding blocks in the years since. Even if one has the money to cough up $28 for a wood-fired personal pizza and a cocktail, sometimes it just feels right to turn left at the quarter pony.