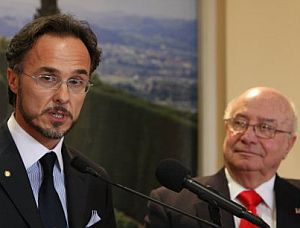 Everything's coming up rosé on Staten Island: on the heels of the new aquarium unveiling in the ferry terminal, plans for the island’s first vineyard are coming into focus. Borough President James Molinaro (pictured, right) has pledged $2 million for the project, which will establish a 2 acre vineyard and demonstration winery at the Staten Island Botanical Garden.

The organic vineyard will yield its first wine about four years from now; it’s the brain-child of a group of Staten Island businessmen who visited Italy last fall. There they met Tuscan winemaker Piergiorgio Castellani (pictured, left), who is now in Staten Island to advise the project, with help from experts in viticulture at Cornell and the University of Pisa. The Staten Island Advance has learned that the wine will probably be a blend of the “delicate and adaptable Sangiovese grape with the hardy Cabernet Savignon and Merlot varietals.”

But you’ll have to get on the ferry for a taste of Staten Island; there are no plans to market the wine, which will be produced in small quantities and poured at the Botanical Garden and some local events. New York City has not had commercial vineyards since Prohibition; although many residents over the years have produced their own wine in their backyards with or without government approval. These days you can buy several varieties of wine marketed as Brooklyn wine, but the grapes have about as much to do with Brooklyn as the L.A. Dodgers.

Borough Photo of Staten Island Borough President James P. Molinaro and Italian winemaker Piergiorgio Castellani speaking at a press conference on the grounds of the Snug Harbor Cultural Center. Photograph from the Advance.