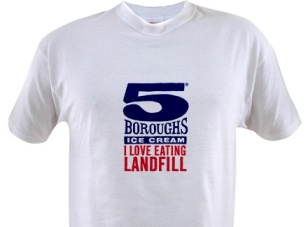 After Staten Island Borough President James Molinaro recommended that the 5 Boroughs ice cream flavor "Staten Island Landfill" be boycotted, sales of the swirly mix of brownies, fudge, crunchies, and cherries in a vanilla ice cream base have been so hot, it's hard to find it anywhere.

Which makes the owners of 5 Boroughs happy - Kim Myles, who founded 5 Boroughs with her husband Scott, said, "We have one thing to say to Mr. Molinaro, which is a huge, heartfelt, 'Thank you.'" And Scott Myles told the Staten Island Advance, "Staten Islanders worked long and hard to get that landfill closed; it's something they should be proud they achieved. One could hope they could see it as a pat on the back, as a way of saying, hey, you finally closed it and now it can just be an ice cream flavor." It turns out that they will introduce another Staten Island flavor - "Staten Island Cherry" is a possibility.

One hilarious thing is that Molinaro refused to try the Landfill flavor when a Daily News reporter offered it to him. He told the Advance, "I'm under strict orders from my doctor not to eat fatty foods, I should only have good ice cream, Haagen Dazs and Ben & Jerry's. And Ralph's Ices. Those I can have." What? The Advance's blog posted nutritional info for Staten Island Landfill ice cream, which notes that, per serving, total calories are 210, calories from fat are 100 and total fat is 11 grams. Looking at Haagen Dazs' basic vanilla nutritional info, total calories are 270, fat calories are 160, and total fat is 18 grams. On the upside, Molinaro is making people think about how much pride or humor they should have in the places they live.

We interviewed the Myleses last month. And Five Boroughs has a CafePress store where you can buy T-shirts in support of Landfill.