Williamsburg's second Starbucks location, set to open at 154 N 7th Street, probably won't be granted its wish to serve beer and wine after all, based on vocal opposition from residents and local business owners at last night's Community Board 1 SLA Review Committee meeting in Brooklyn.

Esther Bell and Sarah Madges, owner and manager of The West coffee house, which is nearby Williamsburg's first Starbucks location on Union Avenue, got 500 signatures in the past three days opposing the license. Madges had previously told Newsweek that The West wasn't intimidated by the Seattle coffee mogul and that "people who want real coffee are going to still come to places like us."

But the threat of a nearby Starbucks serving not only burnt coffee but bad chardonnay was too much for Bell and Madges.

"It really is more about a precedent that opens up to every single Starbucks," Bell said. "They have 255 locations in Manhattan right now, and we would be setting the precedent that Starbucks will not only keep opening up in Brooklyn, block by block, but now take a vital revenue stream from small business. As you know, most restaurants can't survive without alcohol." 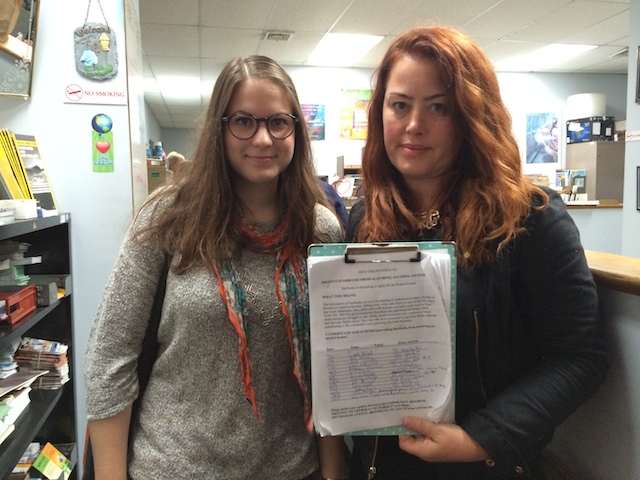 Sarah Madges and Esther Bell, manager and owner of The West, show off their petitions to keep Starbucks from getting a liquor license. (Shayla Love/Gothamist)

It was Starbucks's second trip to the board. Last month, they applied under the not-so-transparent name of "Coffee House Holdings, Inc." and their petition signatures had no addresses. The board asked them to revise their application and try again.

"Last week, nobody knew who they were," said Board co-chair Tom Burrows.

The representative from Starbucks said that the billion dollar corporation has chosen this outpost for beer and wine as an "extension of the brand."

"People do meet at Starbucks," the rep said. "For meeting purposes, just to gather, relax. Some may prefer to choose a cup of coffee, some may choose to have a glass of wine or beer. It's just an extension of the menu, that's all it is."

Out of 20,000 stores, only 30 Starbucks nationwide serve beer and wine. New York's only other location that imbibes is a stealth Starbucks in Macy’s Herald Square. Williamsburg was selected for the next location because it's considered "special."

"It is something that we're doing in very special markets," Starbucks said. "It's not just about the product, the beer and wine... it's about the experience."

Unfortunately, the "experience" that Starbucks wants to create is on the highly congested street off the Bedford L and triggers the SLA's 500 foot rule. The rule says that no license for any liquor consumption can be given to an establishment within 500 feet of three or more existing liquor licenses.

An exception will only be made to this rule if Starbucks can prove there's a "public interest" in drinking at Starbucks. The 500 signatures that Bell brought indicated otherwise to the board. Other community members showed up to speak against it, like Peta Mni, a neighborhood resident who used to work at Starbucks.

"They treat their employees poorly, they don't allow them to unionize, they don't do well by the farmers they trade with and I don't like their coffee," Mni said. "I'm sure you're nice, the franchise owners, but the larger corporation is something I don't like. And they ruin every neighborhood they come into."

As Dean Holdiman, a Williamsburg resident for 20 years, put it: "It just says hello to a lot of other opportunities that I would rather not see. It's as simple as that."

The full CB1 meeting will have the final say on the license at their meeting on October 20.

Outside after the meeting, Bell said that this was just the beginning.

"I feel that now this gives us a chance to rally all the people," she said. "I think that Brooklyn has this moment in history to make a difference. To say look, we saw what happened in Manhattan and it is a mall. And there is no reason to visit anymore. It's ridiculous. You might as well go to your suburban mall."

#liquor license
#starbucks
#williamsburg
#original
Do you know the scoop? Comment below or Send us a Tip